As spring slides into summer birds go quiet; nesting, rearing their young, preparing for their southern migration or just hanging out.  I switch to Lepidoptera and Odontata to keep me busy.  Butterflies and dragonflies have elaborate life cycles; eggs become larvae which grow, sometimes over long time periods, bigger and bigger and finally transform to often spectacular adults who spend their short lives looking for mates, mating- and for the females- laying eggs to renew the cycle.

I’ve discussed dragonflies in two previous posts.  Recently however, I went in search of a butterfly that has eluded me for more than ten years.  The Pipevine Swallowtail is one of five species in the Swallowtail family, _Papilionidae, _that can be seen in the Boston area.  Perhaps the most common of this group is the Eastern Tiger Swallowtail: 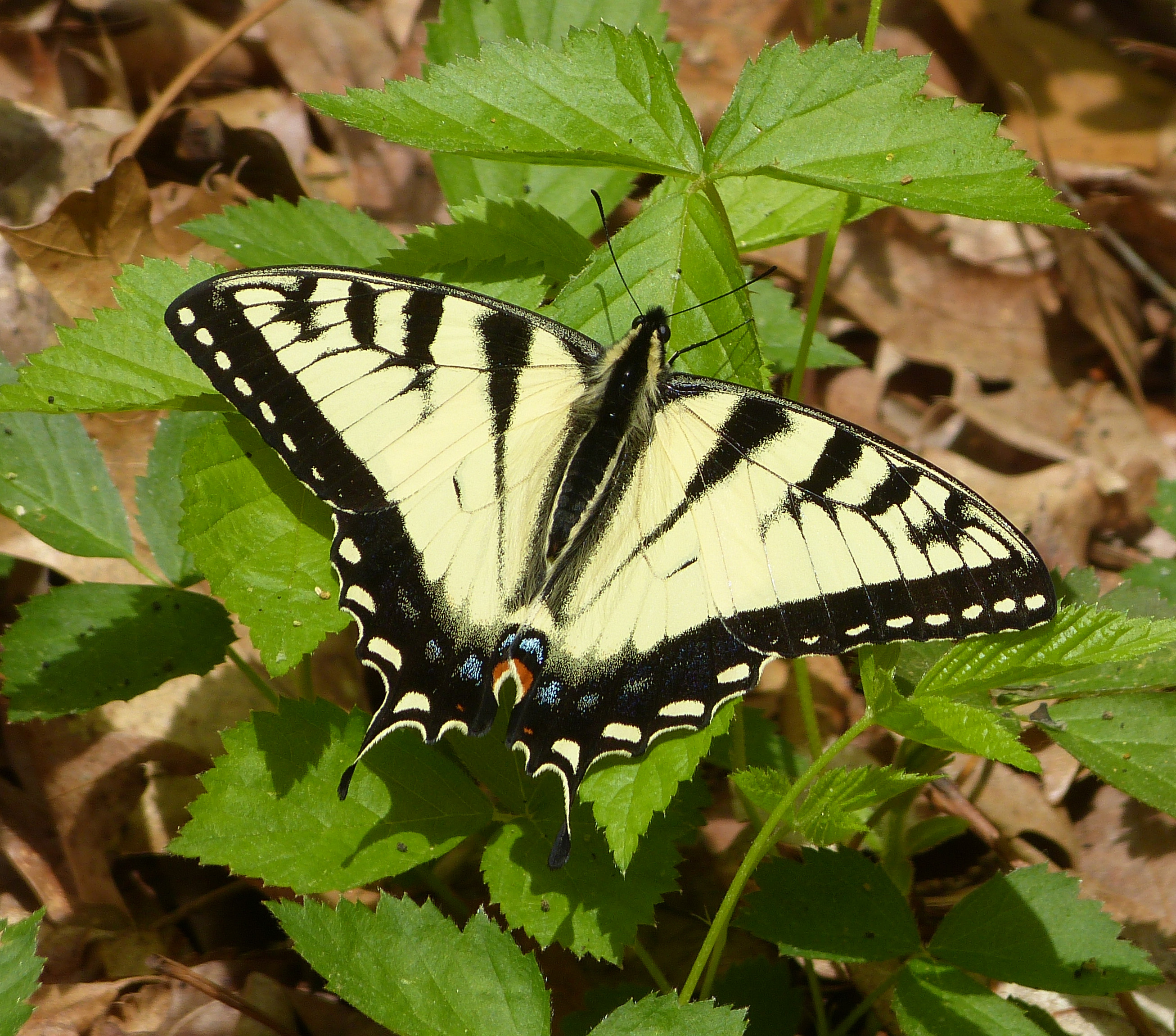 There are two other relatively common swallowtail species in the area; one is the Spicebush Swallowtail: 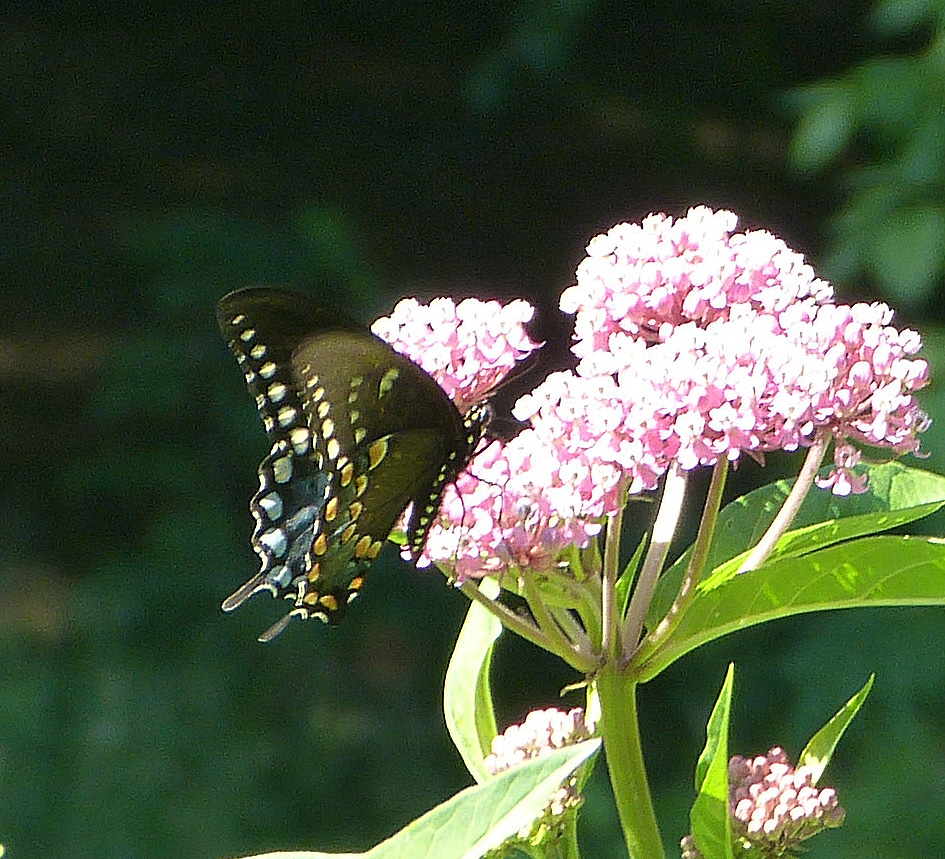 It can be tricky to distinguish that predominantly black butterfly from the named Black Swallowtail: 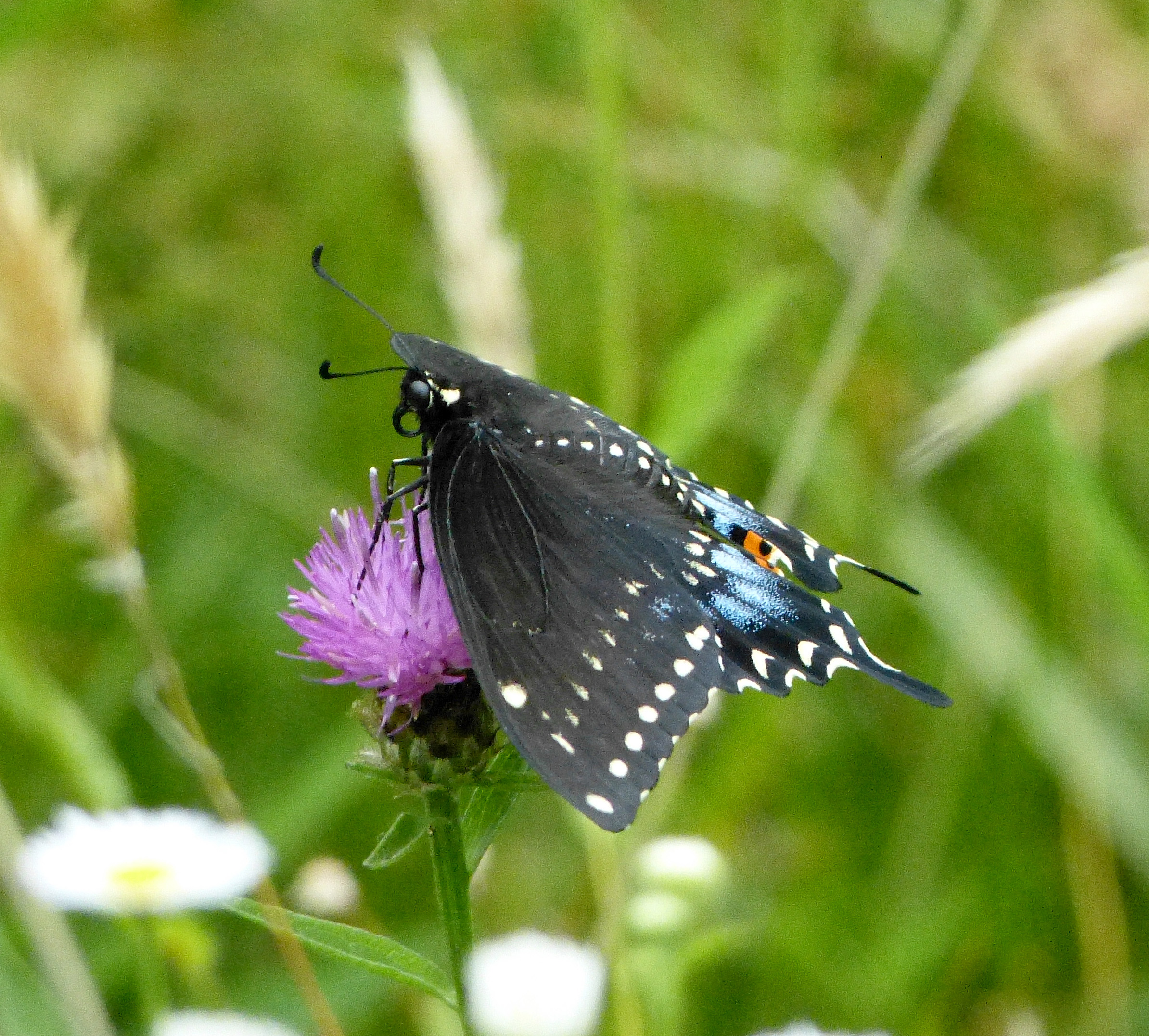 The small yellowish/whitish single spot near the lateral top of the forewing is one way to differentiate this female Black Swallowtail, Papilio polyxenes, from the Spicebush species

To make matters worse, there is a notable gender difference in this last species: 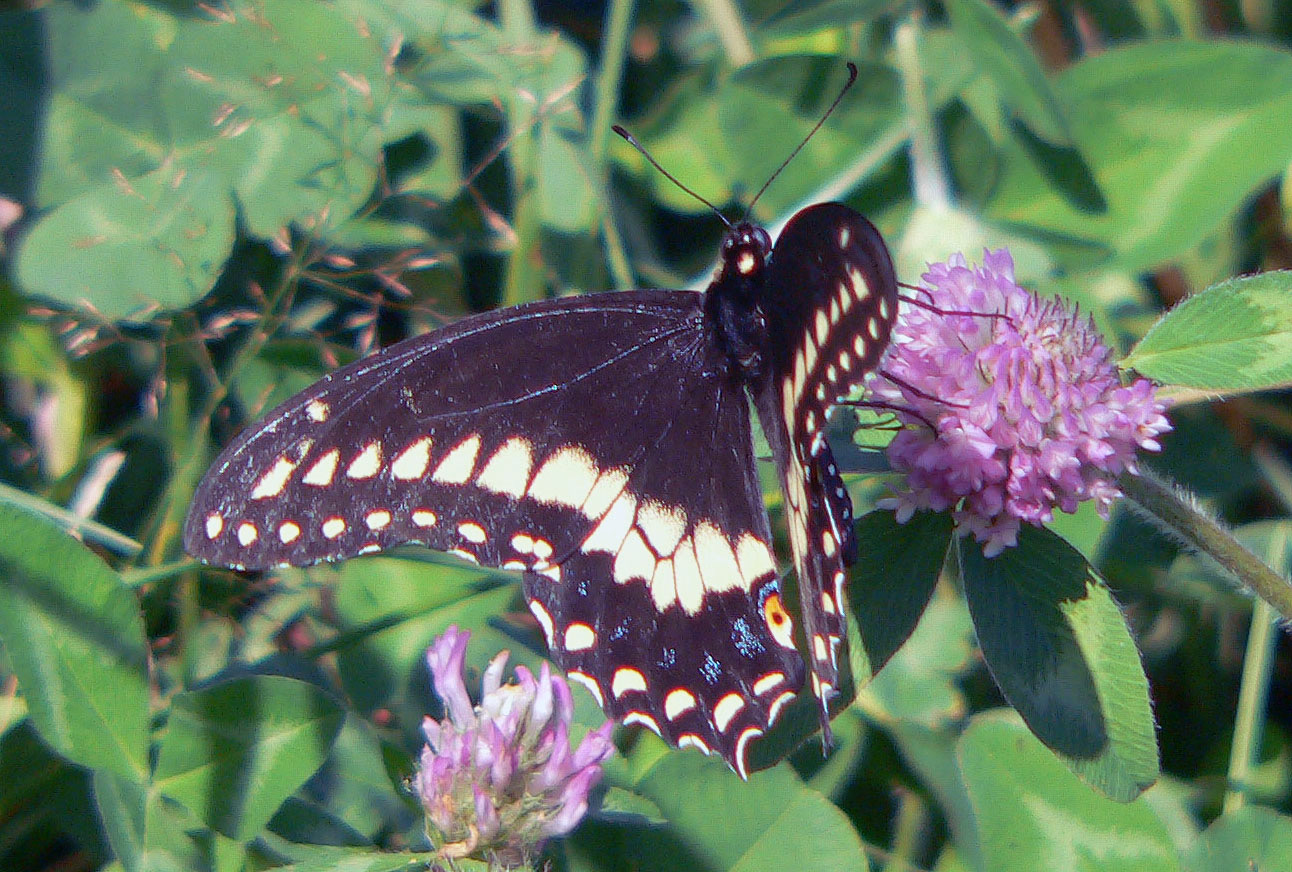 Note the broad yellow median band on the wings of this male Black Swallowtail, and the sub-apical spot characteristic of the species.

Early in July I went to the area where I thought I would have the best odds of finding a Pipevine Swallowtail.  Pipevines, like most butterflies, have specific plants on which they lay their eggs, so called host plants.  Most plants produce toxic substances to reduce their chance of being eaten by predators like the caterpillars of moths and butterflies.  To get around this defense, butterflies evolved over time a resistance to the toxins of one or more plant types; they aren’t deterred by the poison and in fact benefit from eating it because they in turn take the nasty toxin into their bodies thus protecting them from being eaten by birds or other predators.  Many butterflies have several host plants; the Pipevine has only one, the genus Aristolochia or Dutchman’s Pipe, named for it’s flower which is thought by some to resemble a meerschaum pipe: 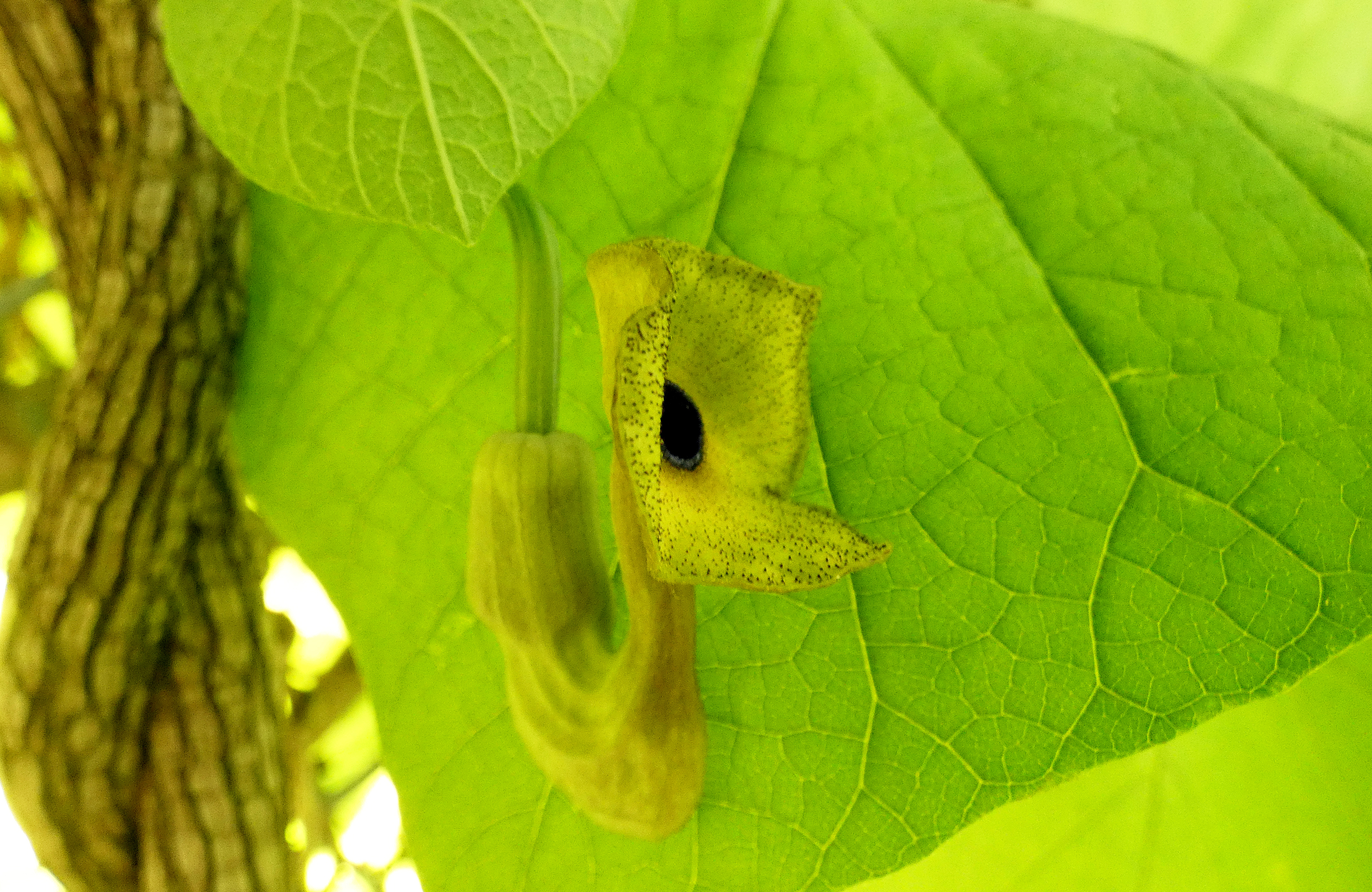 The Editor of the Arboretum’s scientific publication Arnoldia has recently written a great post on her blog ARblog which describes this symbiotic relationship in detail.

The Arboretum has a number of these vines growing on the chain link fence surrounding the garage near the main entrance.  I’ve searched them every summer since I learned of the swallowtail connection- in vain.  But this time I spotted something interesting fluttering around the massive leaves of Aristolochia macrophylla:

Could this be my illusive lep?  A moment later it perched and I got a closer look: 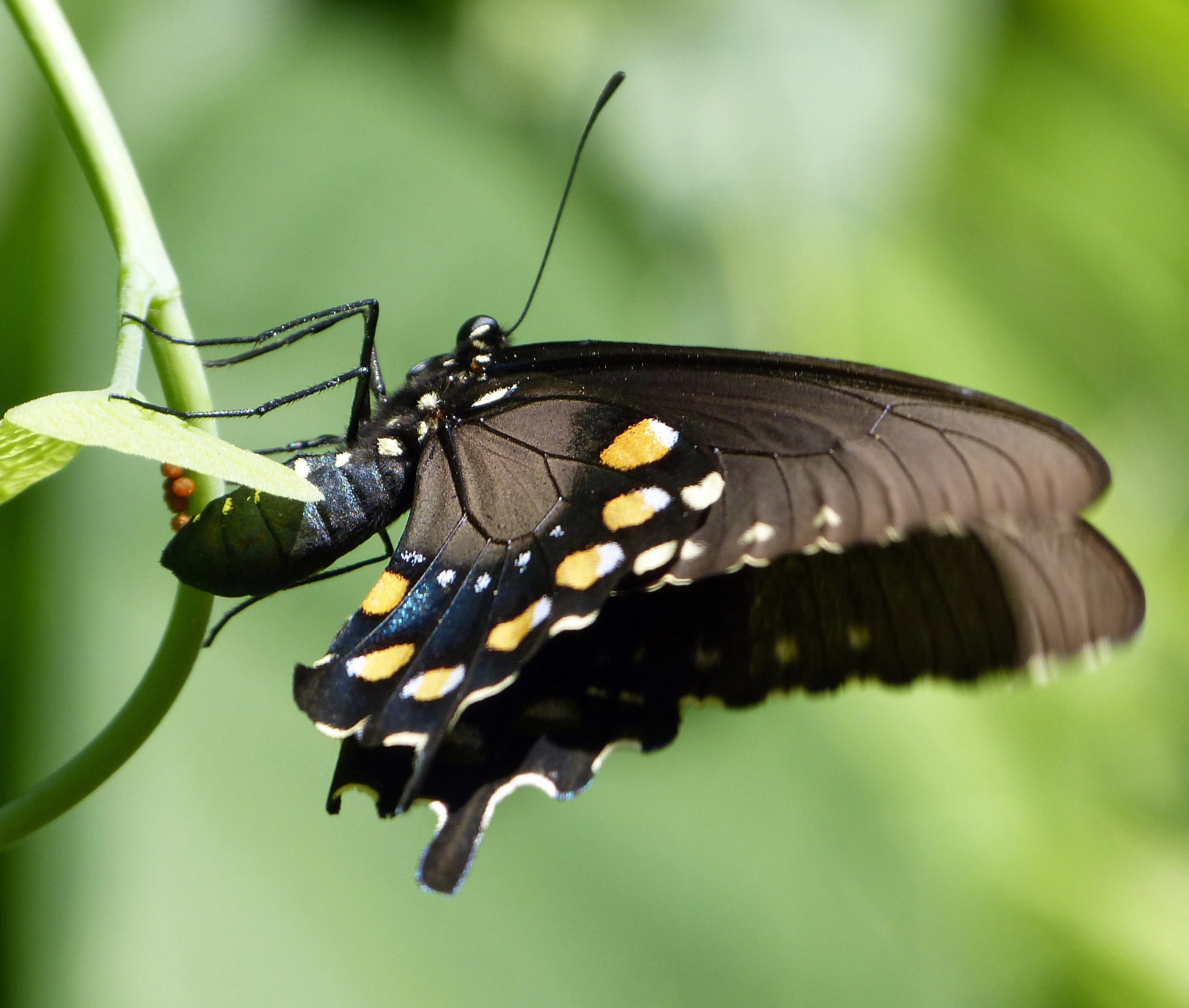 The butterfly was laying eggs on a stem of the vine!  Identity confirmed!

When I returned home I tried to determine just how special my sighting was.  I went to the website Butterflies and Moths of North America and focused in on sightings in Suffolk County, Massachusetts.  There was only one historical listing in over 23 years, a sighting verified in 2004.  Another check on sightings for the entire state since 2010 uncovered only 28 reports.  I was on to a big time rarity!  I emailed some friends who work at the Arboretum, posted the sighting on MassLep (a local list server), and reported it to the above website along with some images.

A week later the Manager of Plant Records at the Arb, and fellow naturalist, emailed me an image of a Pipevine Swallowtail he caught nectaring on an azalea flower at the top of Bussey Hill: 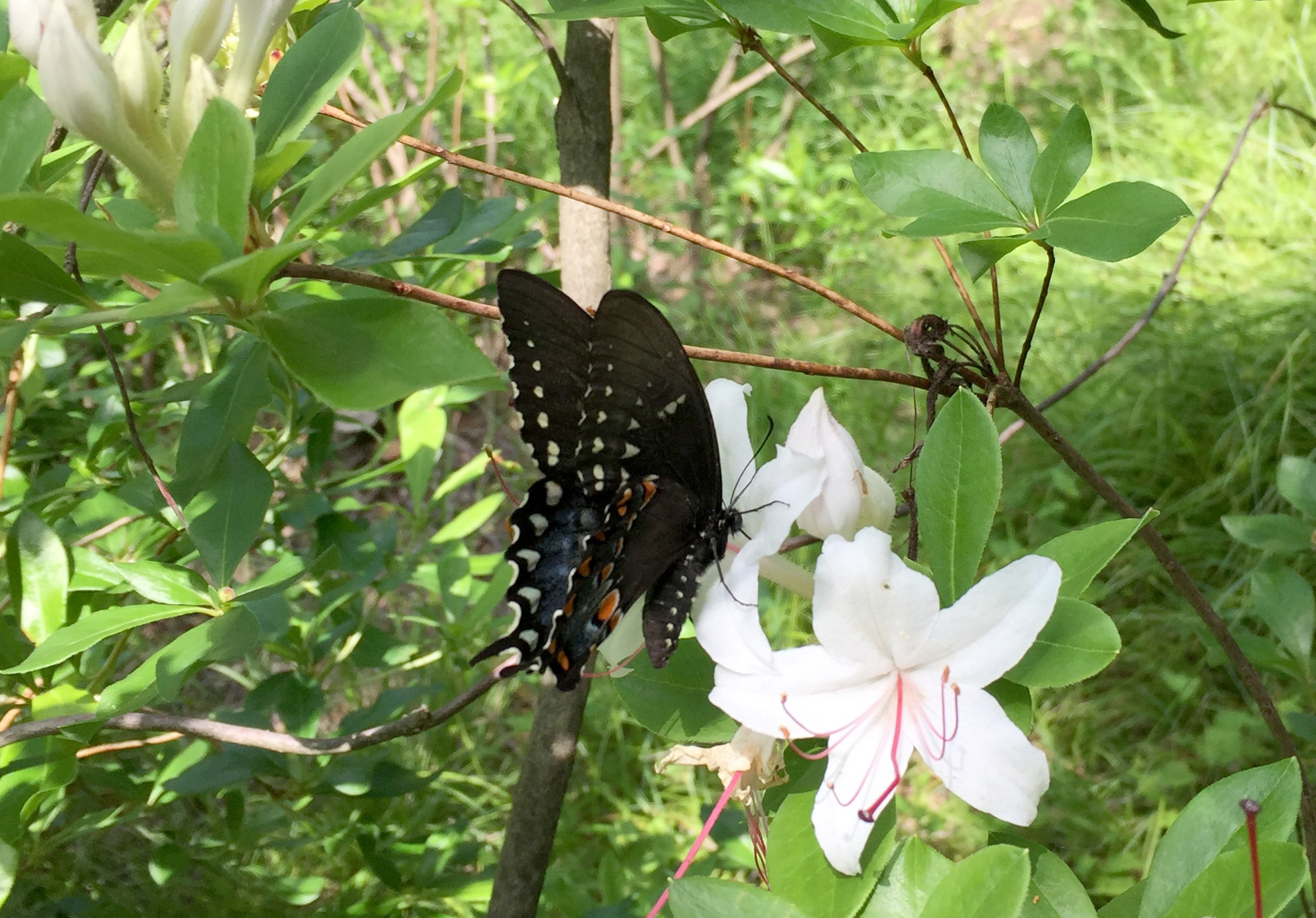 So this was now the third sighting of this swallowtail in Suffolk County?  And as if that wasn’t enough, the next day I received word that two seasoned horticulturalists on the AA staff had discovered Pipevine Swallowtail caterpillars on the same vines near the garage back in 2010, and had even over-wintered one which emerged from it’s chrysalis the following spring!  They have found one or more as caterpillars almost every year since then.  But they record stuff in botanical journals.

Suddenly my rare discovery seemed mundane.  Maybe this swallowtail was pretty common, but no one bothers to report it to obscure websites.  I backed off my high to gather some perspective.  I had never seen it, and I’ve been looking at butterflies for many years.  A cursory review of MassLep reports in the last few years revealed only 3 reports, and they were HIGHLIGHTED in each case.  So yes, this was a rare sighting, but perhaps the Arboretum, with it’s abundant pipevine plantings, may be a local mecca for this lep.  In fact, when I made a presentation on site about my find recently, one of the attendees reported he had seen what he thought might have been a Pipevine Swallowtail as he approached the meeting site.  I pointed out that other more common black butterflies were more likely.  But after the meeting some in the group went with him to where he had his sighting and found and photographed the creature.  After review, the image turned out to be our index swallowtail!  I’ve been back a number of times to follow the development of the eggs and have seen several more likely suspects in flight but have not been able to confirm their identification.

Speaking of the eggs, they have hatched: 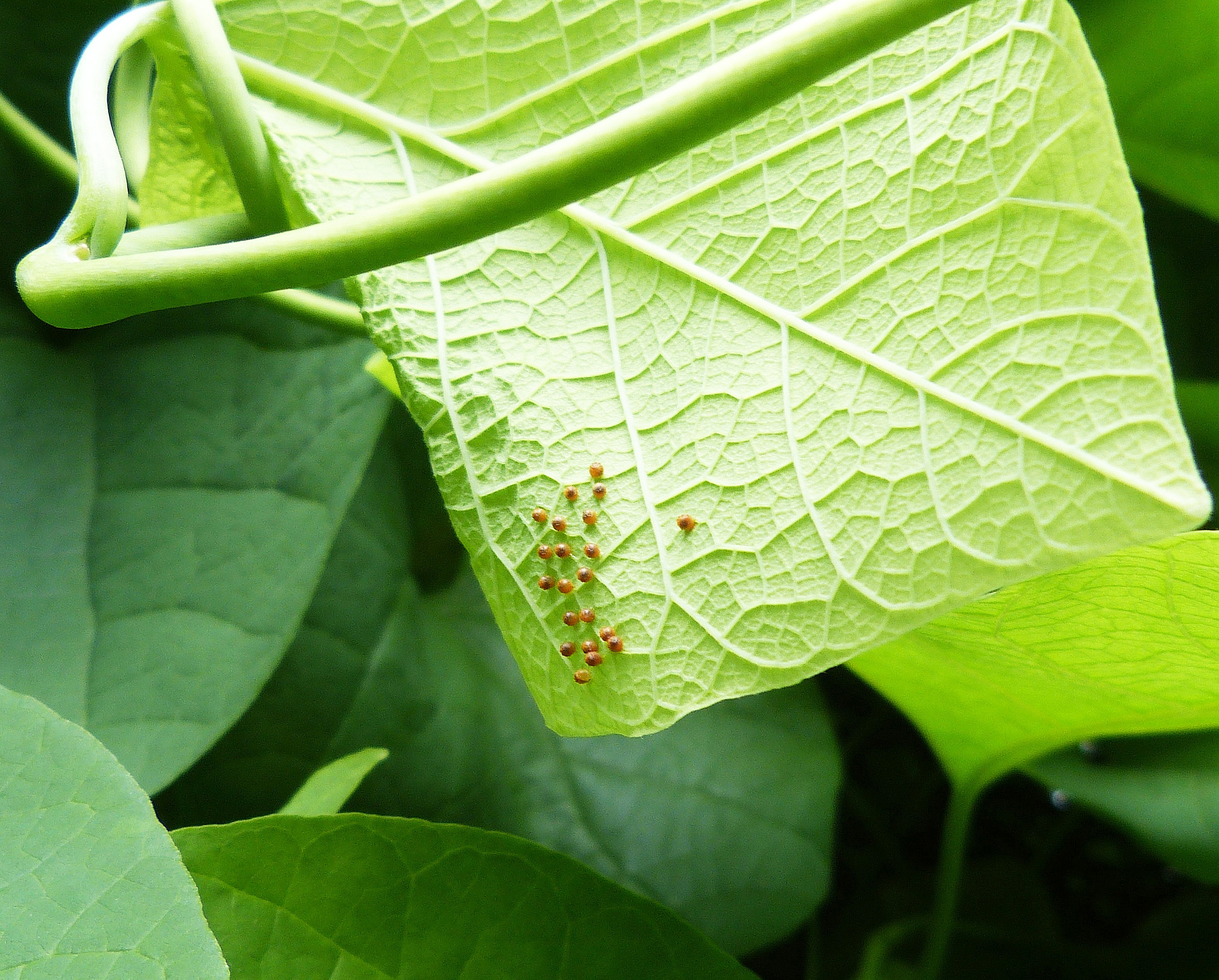 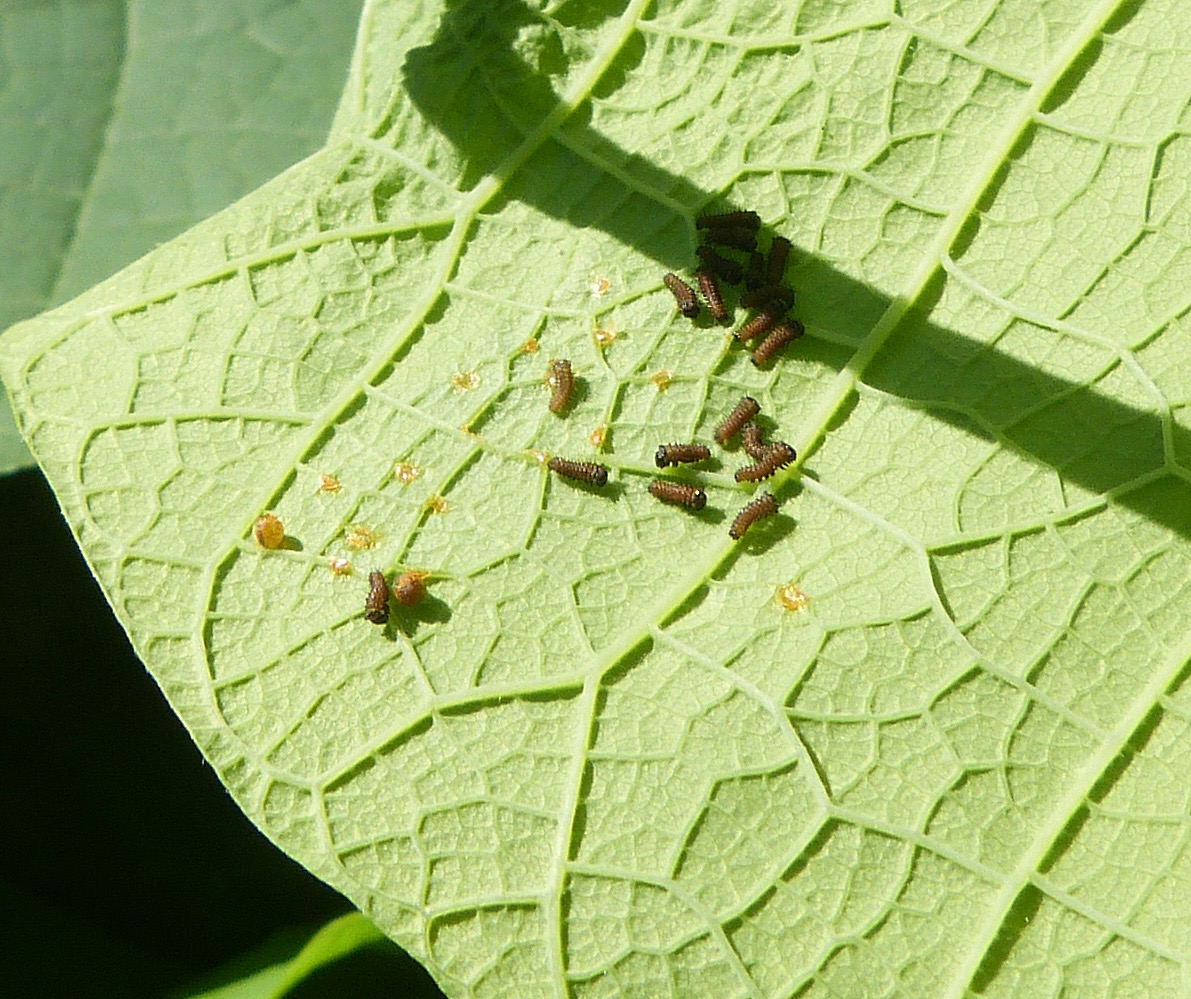 Five days later most of the eggs have hatched into first instar cats. 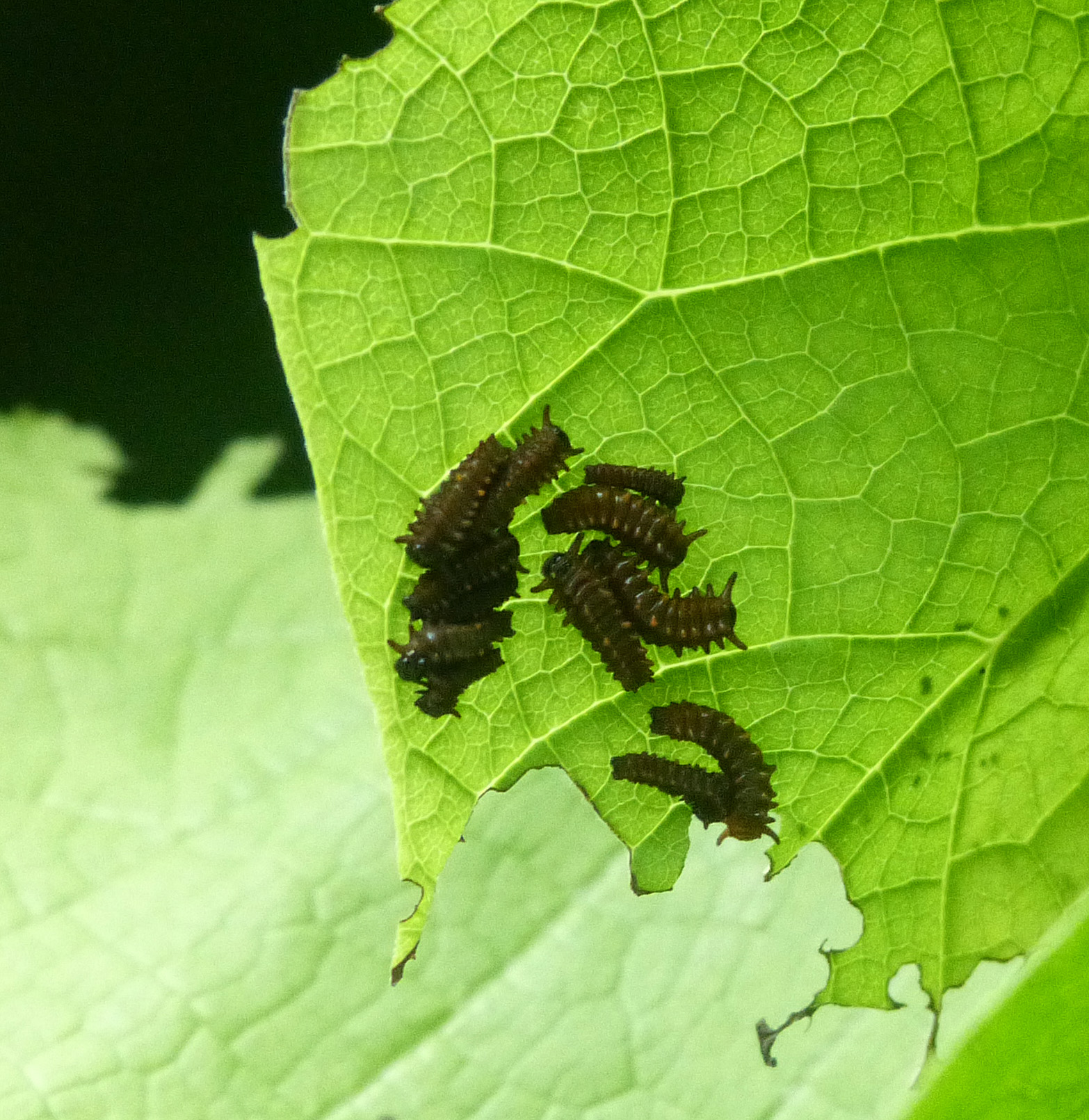 A dozen second or third instar cats still hanging out together a few days later. 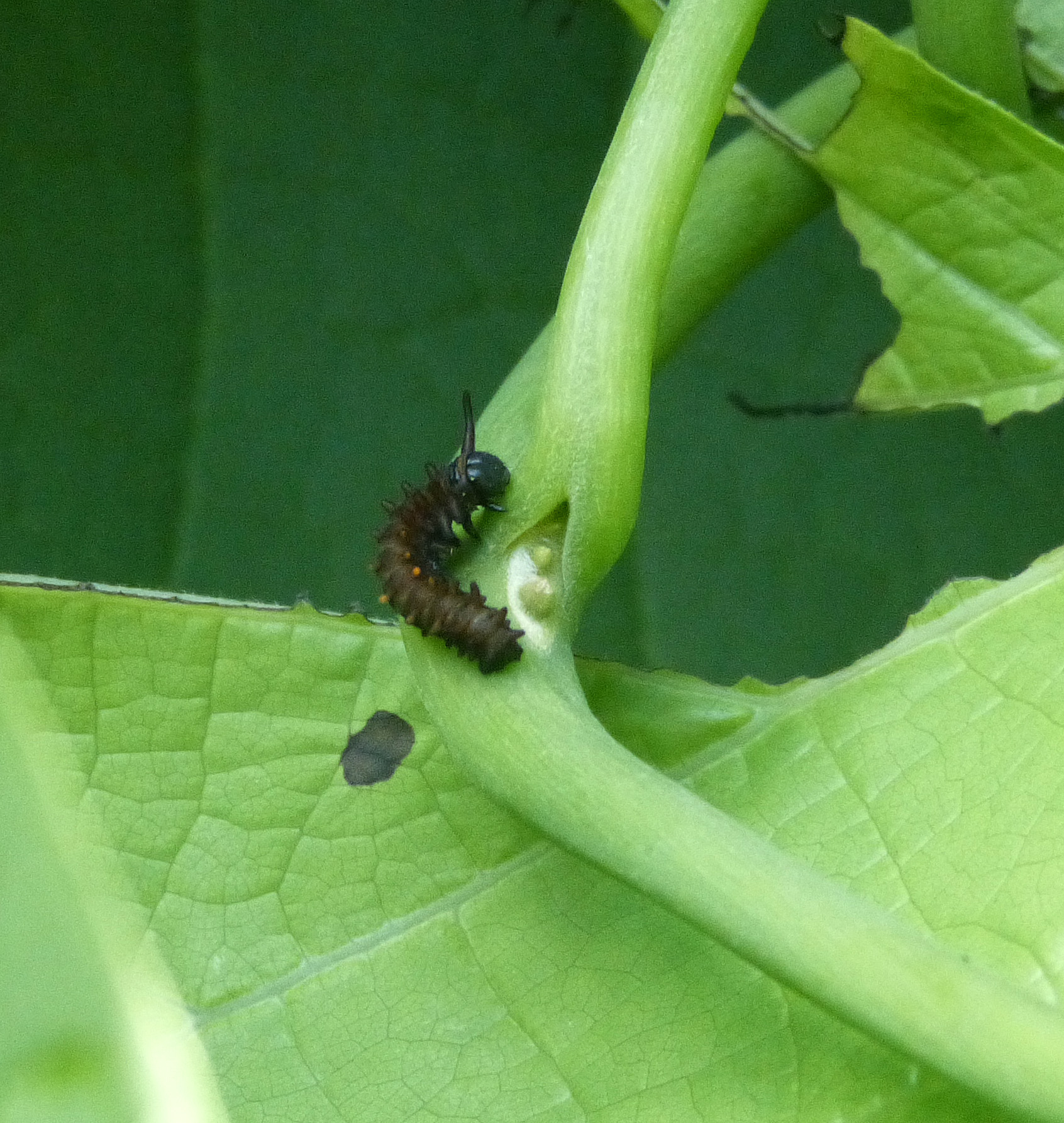 This little guy has a delineated head at one week of age, and has wandered away from the herd.

Another colleague at the Arboretum has agreed to share her Monarch caterpillar inclosure on display in the Visitors Center, and we have put about a dozen of the Pipevine caterpillars inside along with host plant offerings.  Will they pupate?  Stay tuned, or better yet, come and visit the display when you’re nearby. 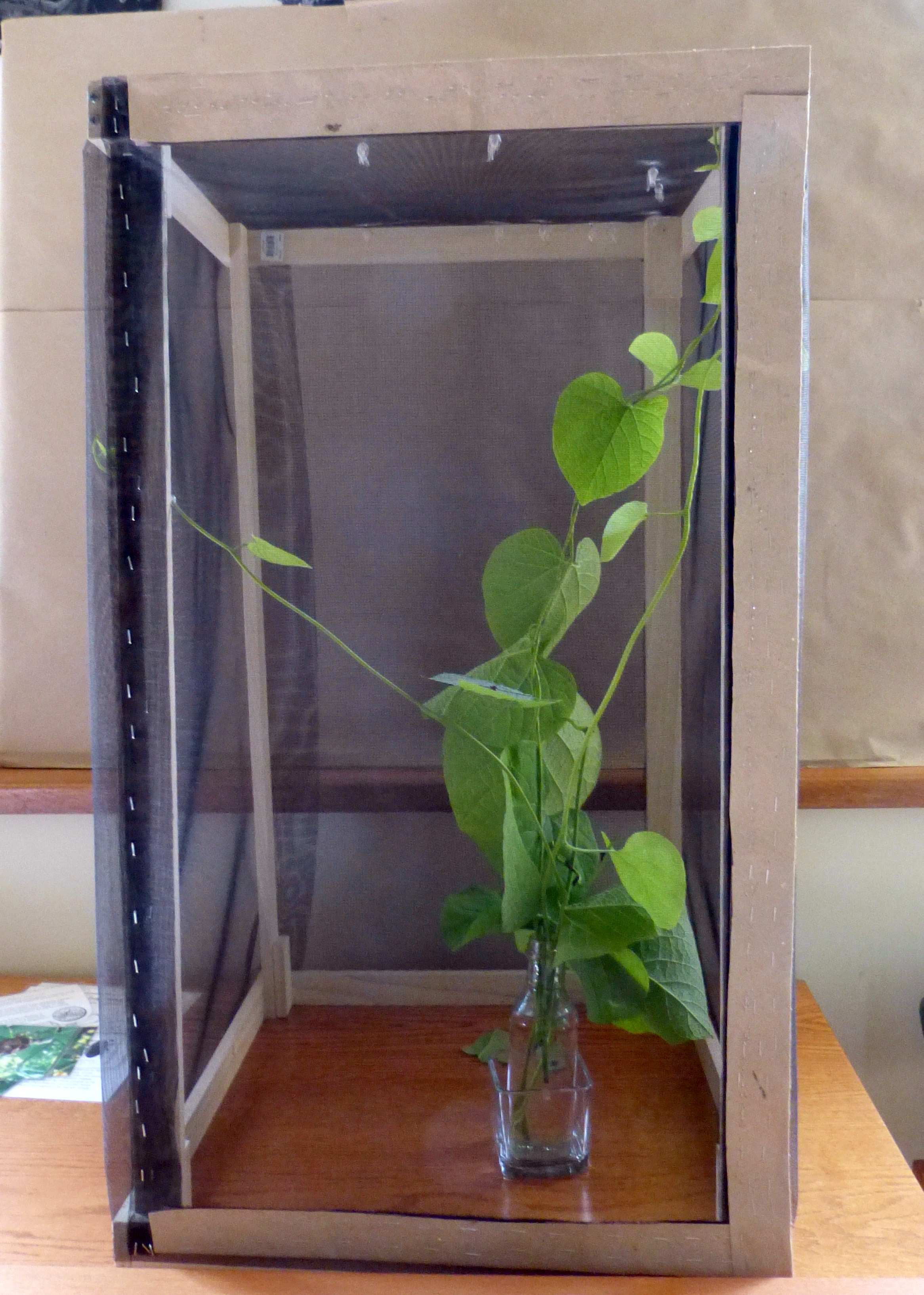 The butterfly inclosure at the Visitor’s Center in the Hunnewell Building.

As I mentioned at the beginning of this long post, there are five swallowtail species that can be seen on the Arboretum grounds.  I still have one to go, although I did see it a few years ago while vacationing in Pennsylvania: 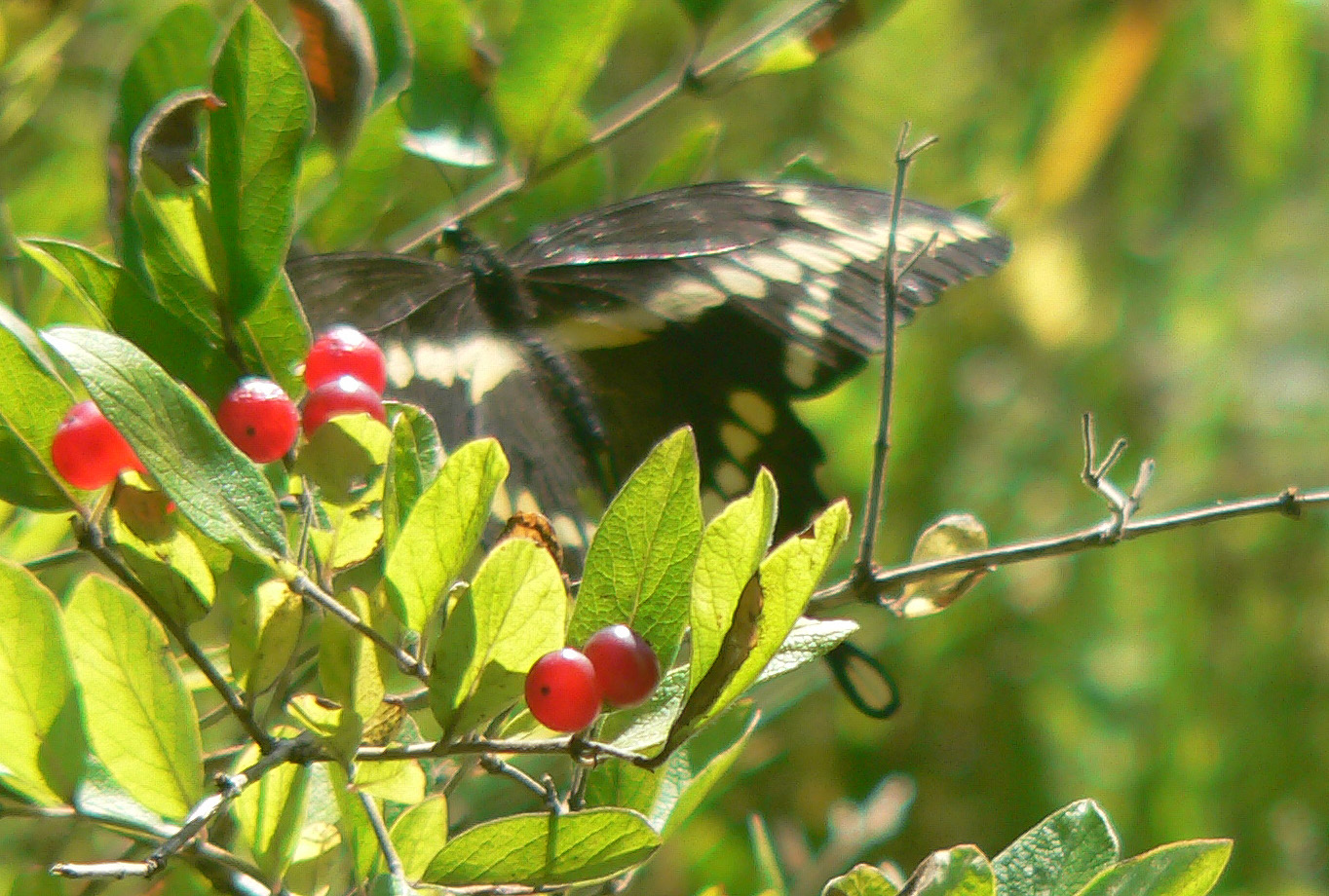 Giant Swallowtail Papilio cresphontes. Although this is a very poor photo, it is enough to confirm the identity of the specimen. The yellow spot within the tail, seen to the right of the lower berries, is diagnostic.

Giant Swallowtails have been reported in the Arboretum for the last two years; it is a species that seems to be increasing in our area.  Their host plants are Prickly Ash and Hop Tree; both are represented in the collection.  I’ll be keeping a look out!