In the spring I love to go birding in the Arnold Arboretum and elsewhere on the Emerald Necklace.   By late June, however, most of the migratory birds have either moved farther north to their breeding grounds or are nesting locally and want to be as inconspicuous as possible to avoid detection.  That’s when I look elsewhere in the natural world for some interesting and colorful sightings.

Dragonflies are an ancient invertebrate group, at least 250 million years old.  Some of the prehistoric ones had wingspans of three feet, probably due to the higher levels of oxygen in the atmosphere way back then. Today’s versions are still large for an insect, some with body lengths of more than three inches.  There are two main subgroups– damselflies and dragonflies.  Here are examples of each, showing the primary differences: 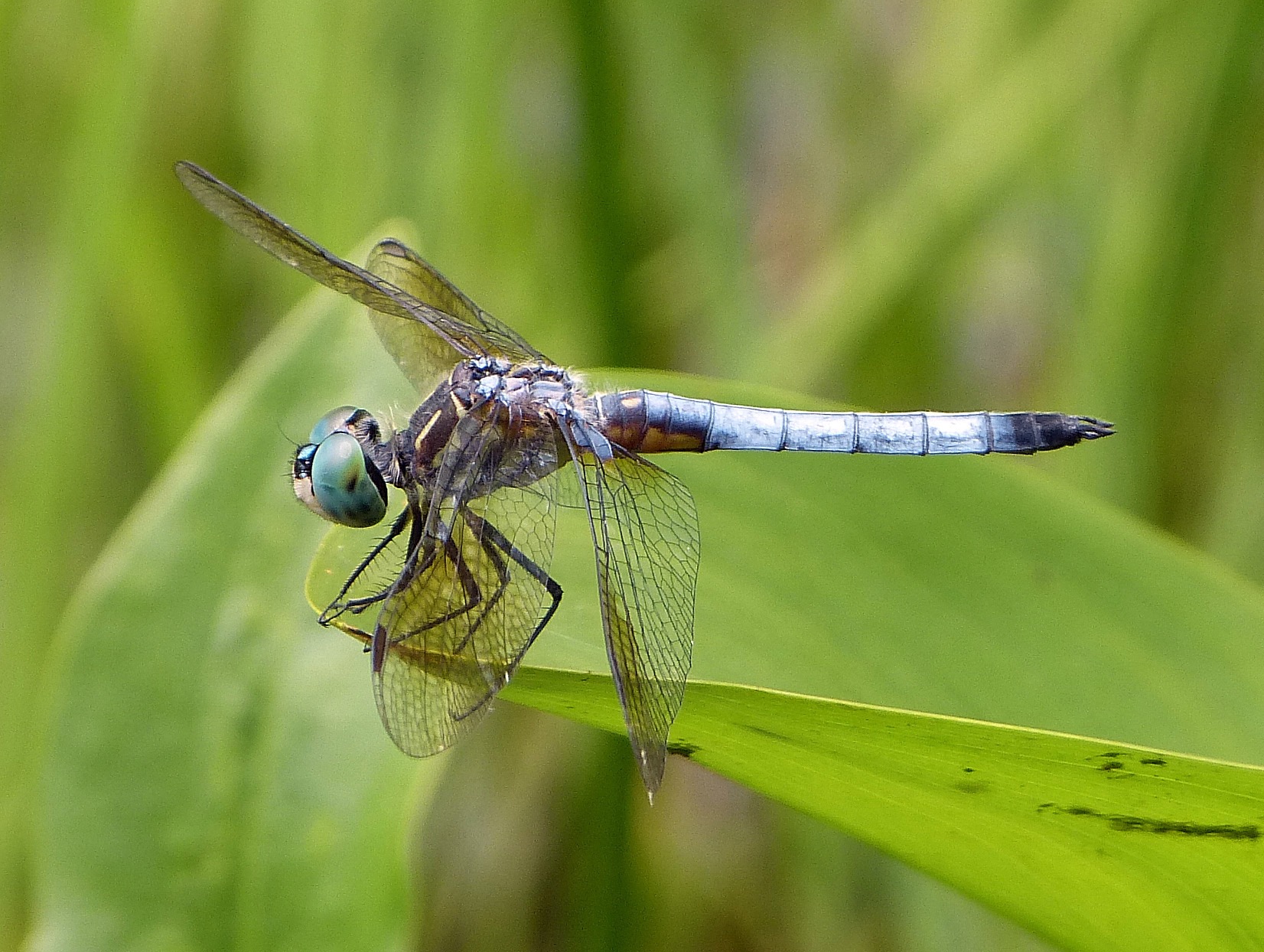 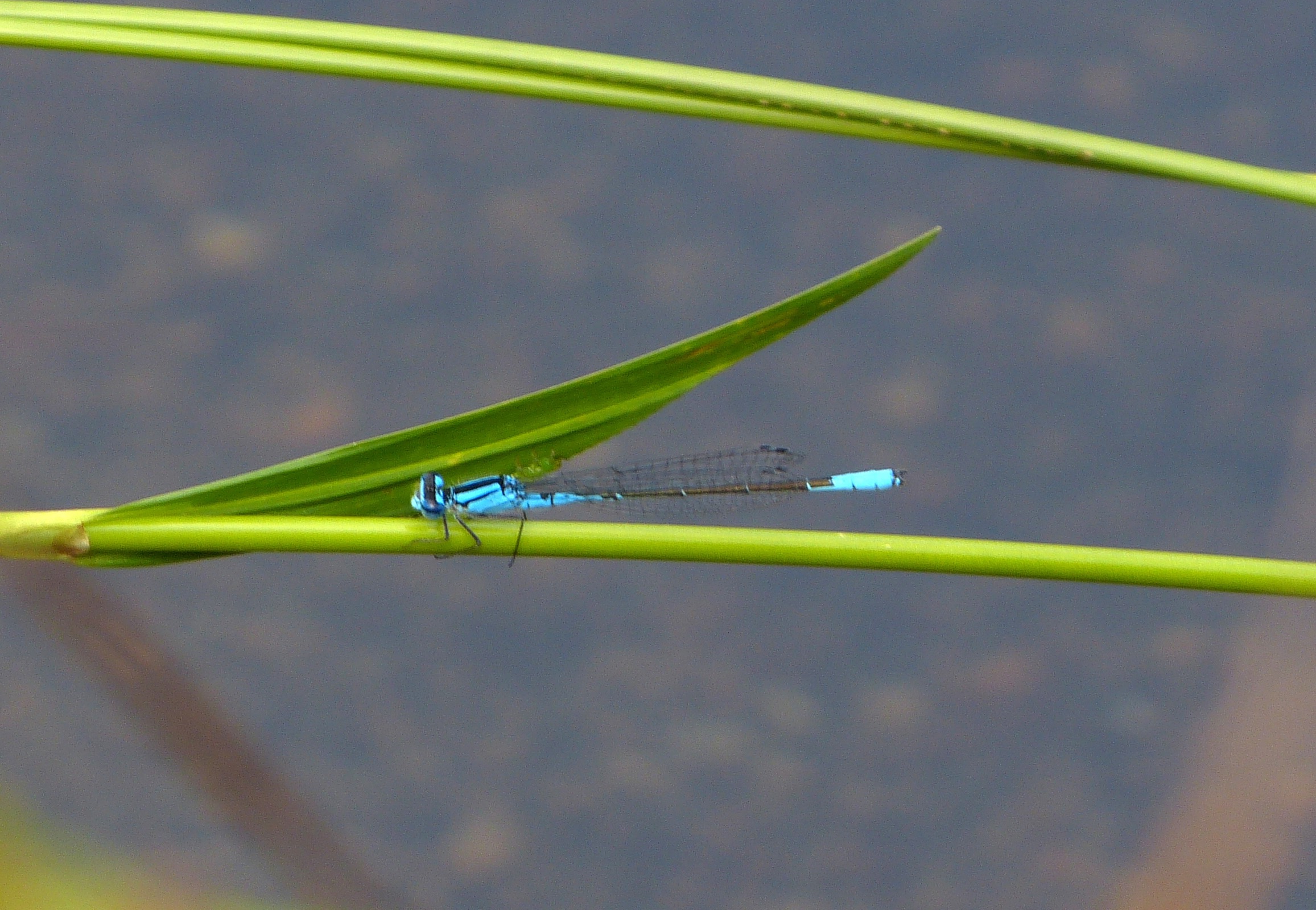 Azure Bluet, male. This pond damselfly is fairly characteristic of the damselfly sub-group; slender, delicate and holding its wings closed when at rest. They are weaker fliers than their cousins the dragonflies.

All members of the order Odonata (odes for short) have peculiar mating behaviors. The male grasps the female either behind the eyes (dragonfly) or by the neck (damselfly) as seen below: 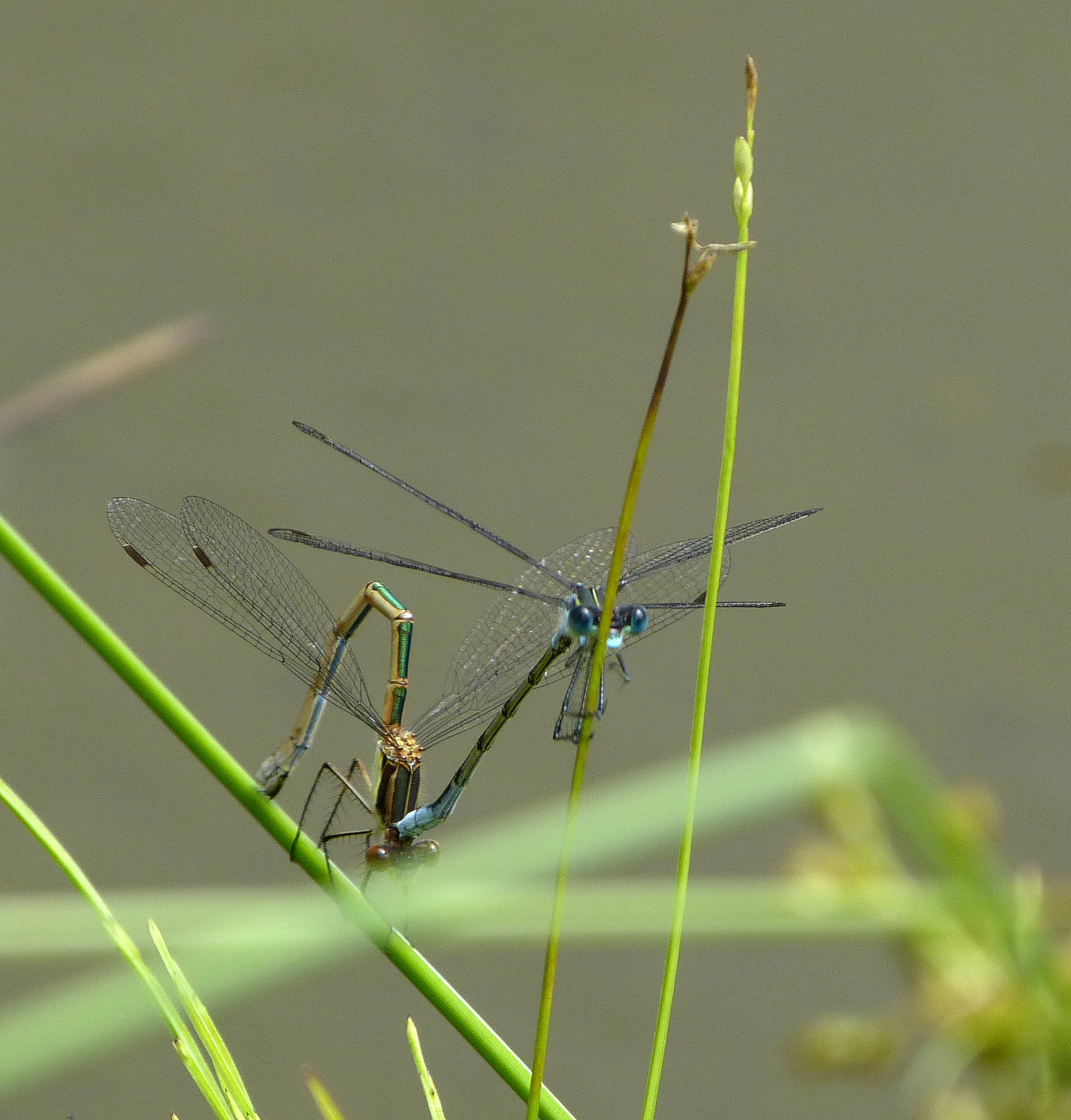 Probable Northern Spreadwing tandem pair; the male is the bluish one. Several odonata experts studied this image taken recently in Vermont and couldn’t positively identify it. Many damselflies can only be distinguished from one another by a careful study of their external genitalia! Photo: Bob Mayer

After mating the female dragonfly stores sperm in her spermetheca. The males compete for fertilization and some will scrape out previous sperm from the female’s spermetheca.  Talk about male competitiveness!

The eggs are laid on the leaves of water plants or in water where they hatch into larvae.  The larvae can be nearly as large as the adult insect but because they live in water they are seldom seen. They also live much longer than the adults, most of whom fly around for less than a month. The larvae of some odes live and grow for several years, moulting their exoskeletons many times before finally undergoing metamorphosis into the winged adult.  Here is an image of a dragonfly larva my grandson discovered while digging in the sand in a lake in Vermont: 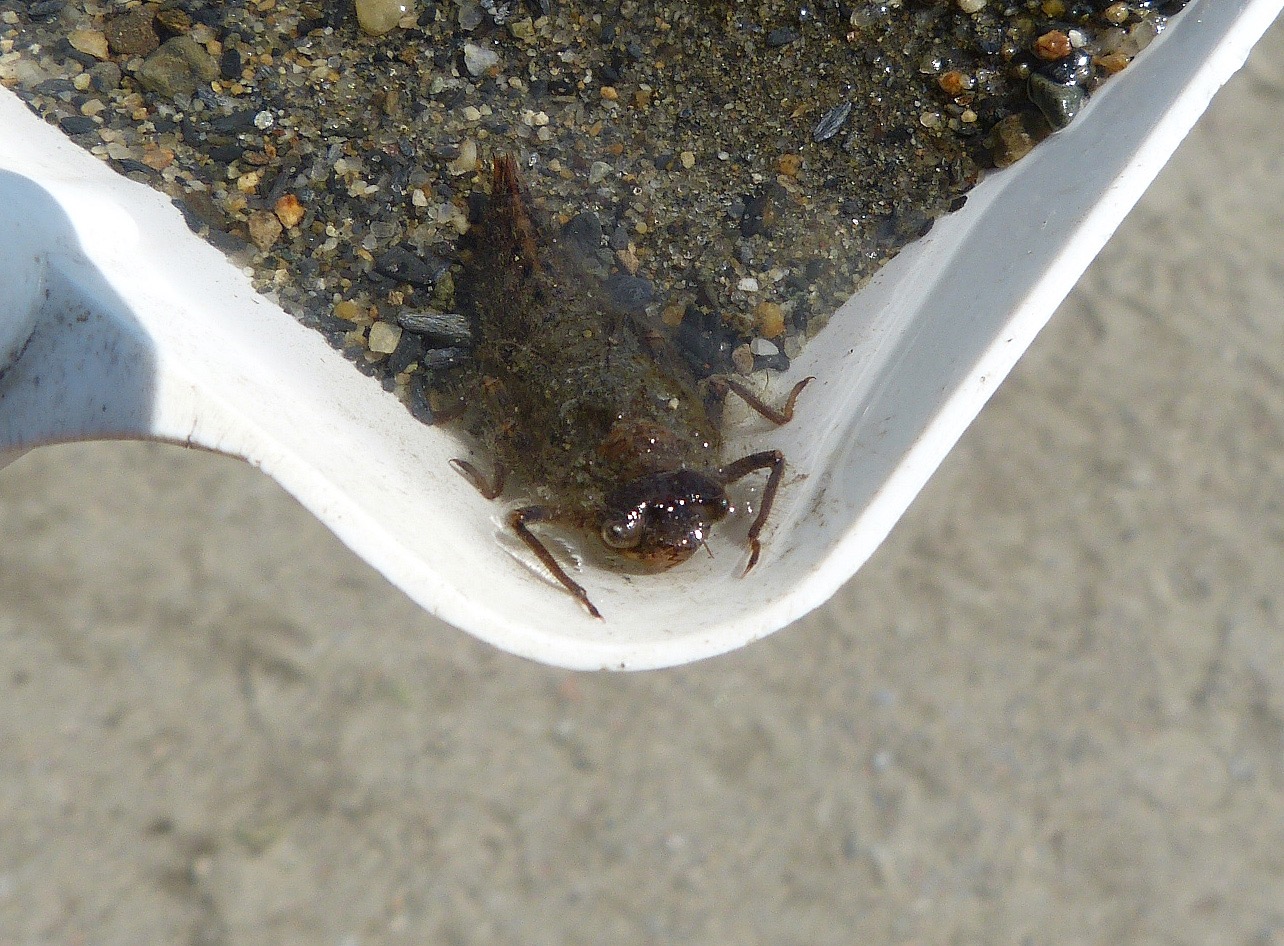 This dragonfly larva may live longer than the adult form, but it won’t compete in a beauty contest! Photo: Bob Mayer

All odes are carnivores, in both larval and adult form, and adult dragonflies capture and eat all sorts of flying insects, including other dragonflies, on the wing.

Over the last ten years I’ve recorded about a dozen different species of Odonata in the Arboretum. They can be found almost anywhere but are usually not far from some water source.  The easiest place to find them is near the three man-made ponds off Meadow Road.  In the remainder of this post I will discuss some of these pond species, showing images of both sexes for many of them as they are often quite dissimilar.  All the displayed dragonflies are members of the same family— the skimmers.

One of the smallest and prettiest pond species in the AA is the Eastern Amberwing: 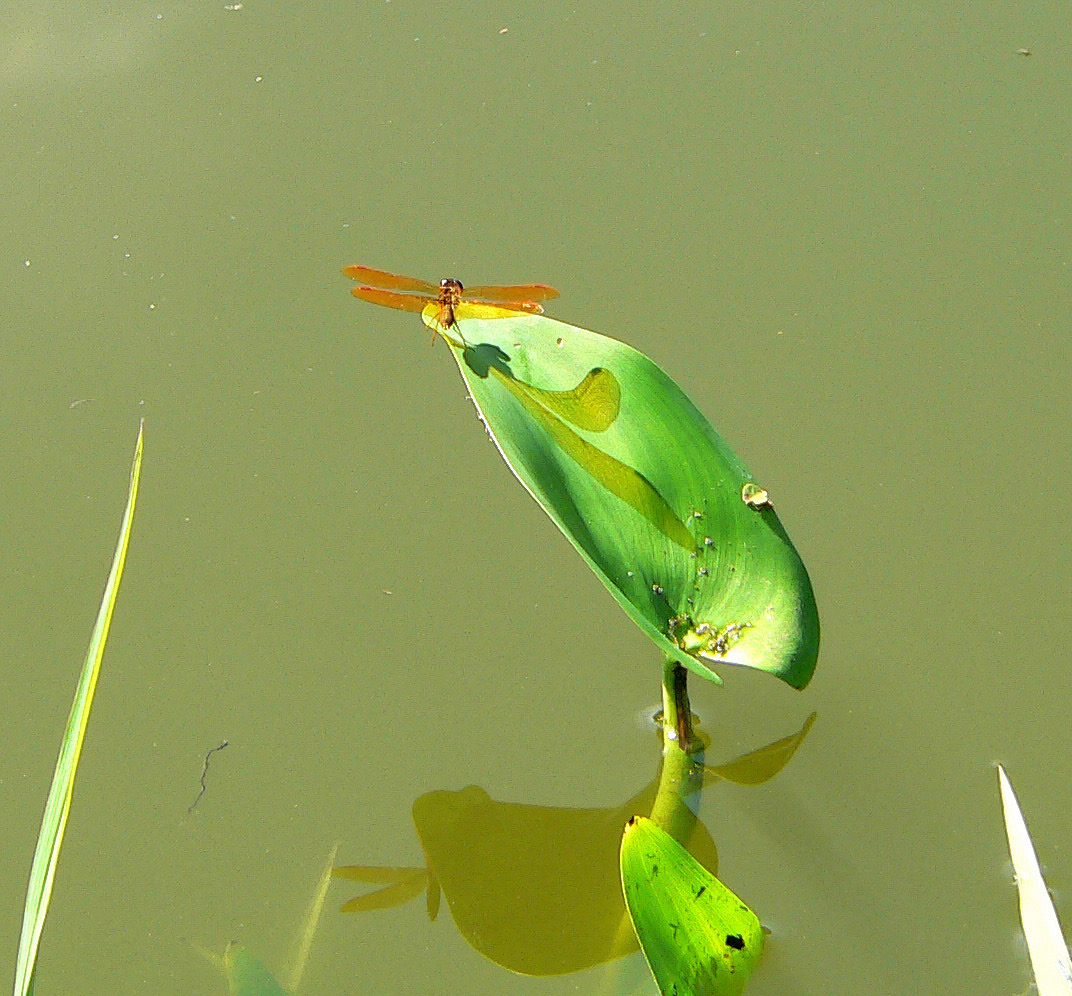 Like many dragonfly species, the female is patterned differently 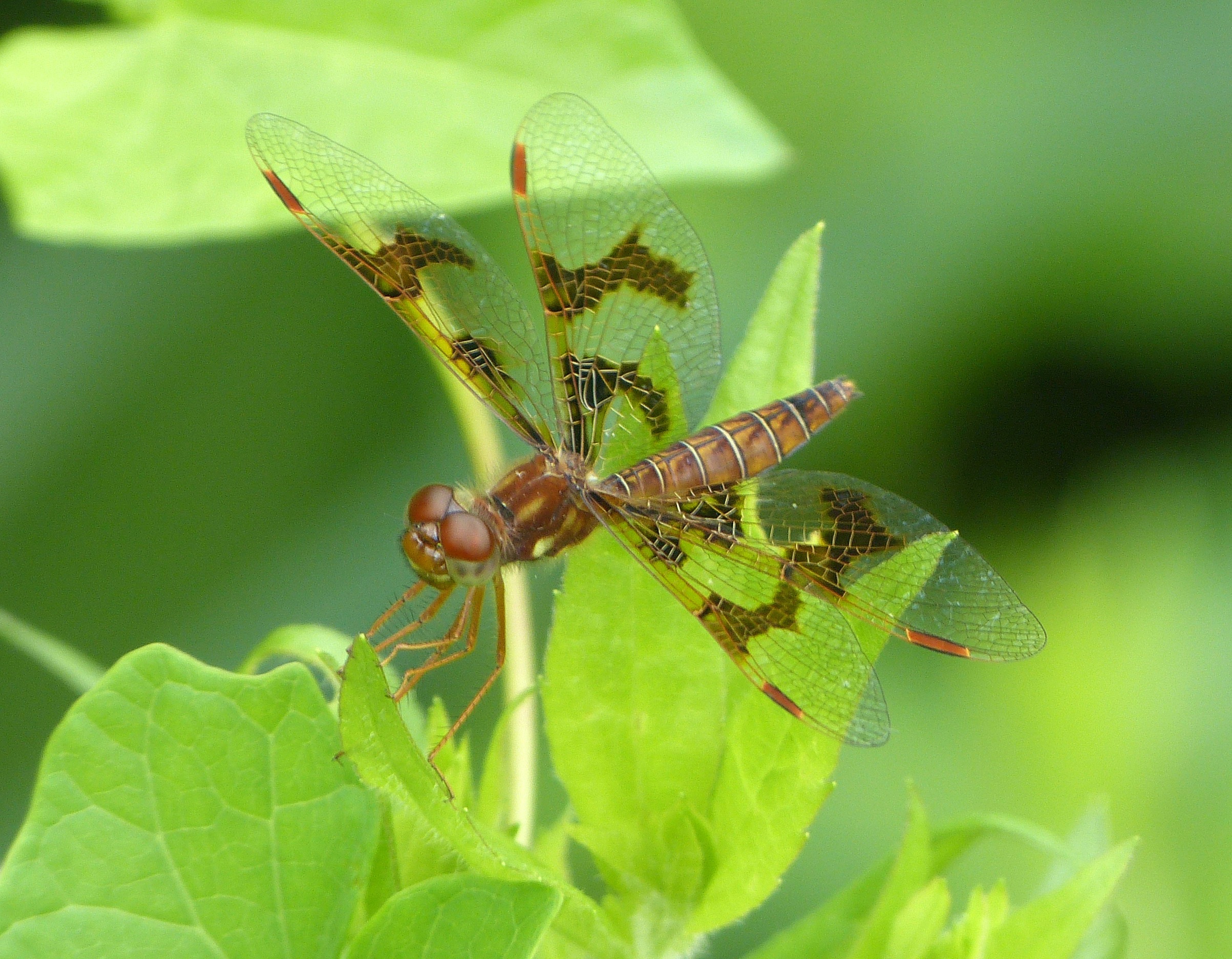 Eastern Amberwing female. Note the dark patches on her wings, not seen on the male of this small dragonfly. Photo: Bob Mayer

Blue Dashers are medium-sized dragonflies that are common around the ponds during much of the summer.  The male is pictured above, representing a “typical dragonfly”.  Females are seen less frequently and have different markings: 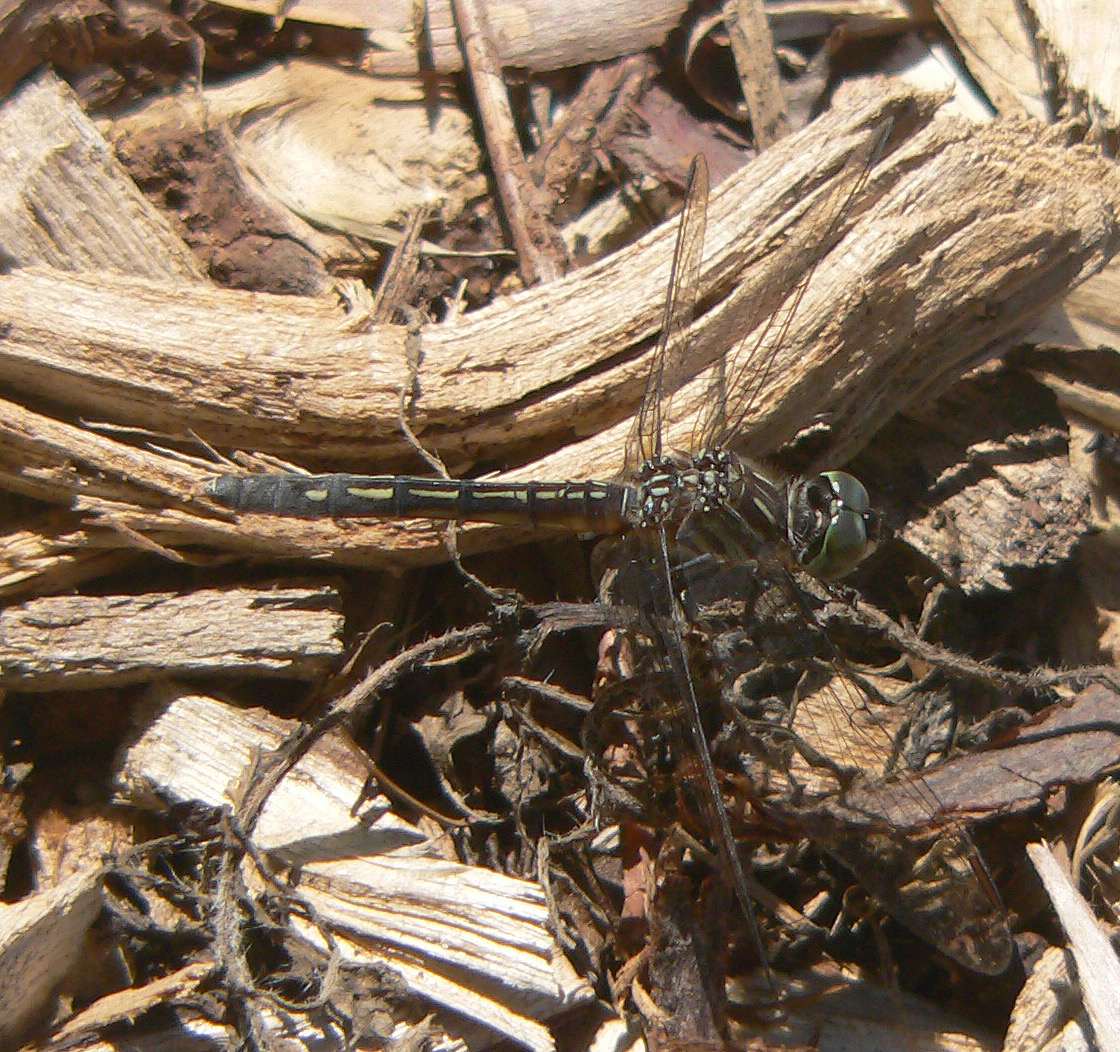 The female Blue Dasher has no blue color on it’s abdomen, instead showing paired yellow streaks along the sides. Photo: Bob Mayer

Another very common dragonfly near the ponds is well named: 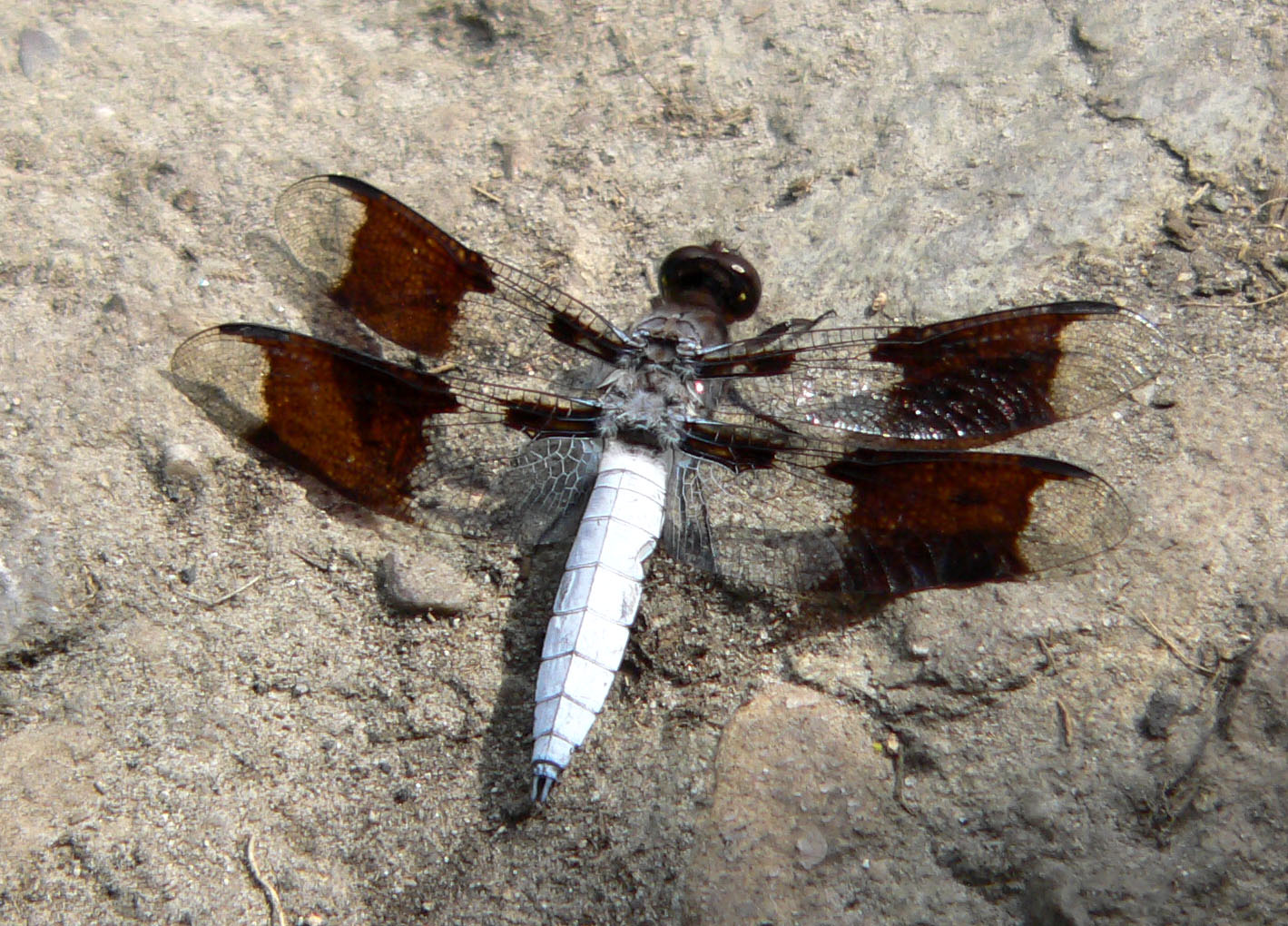 Here again the female of this species is quite different: 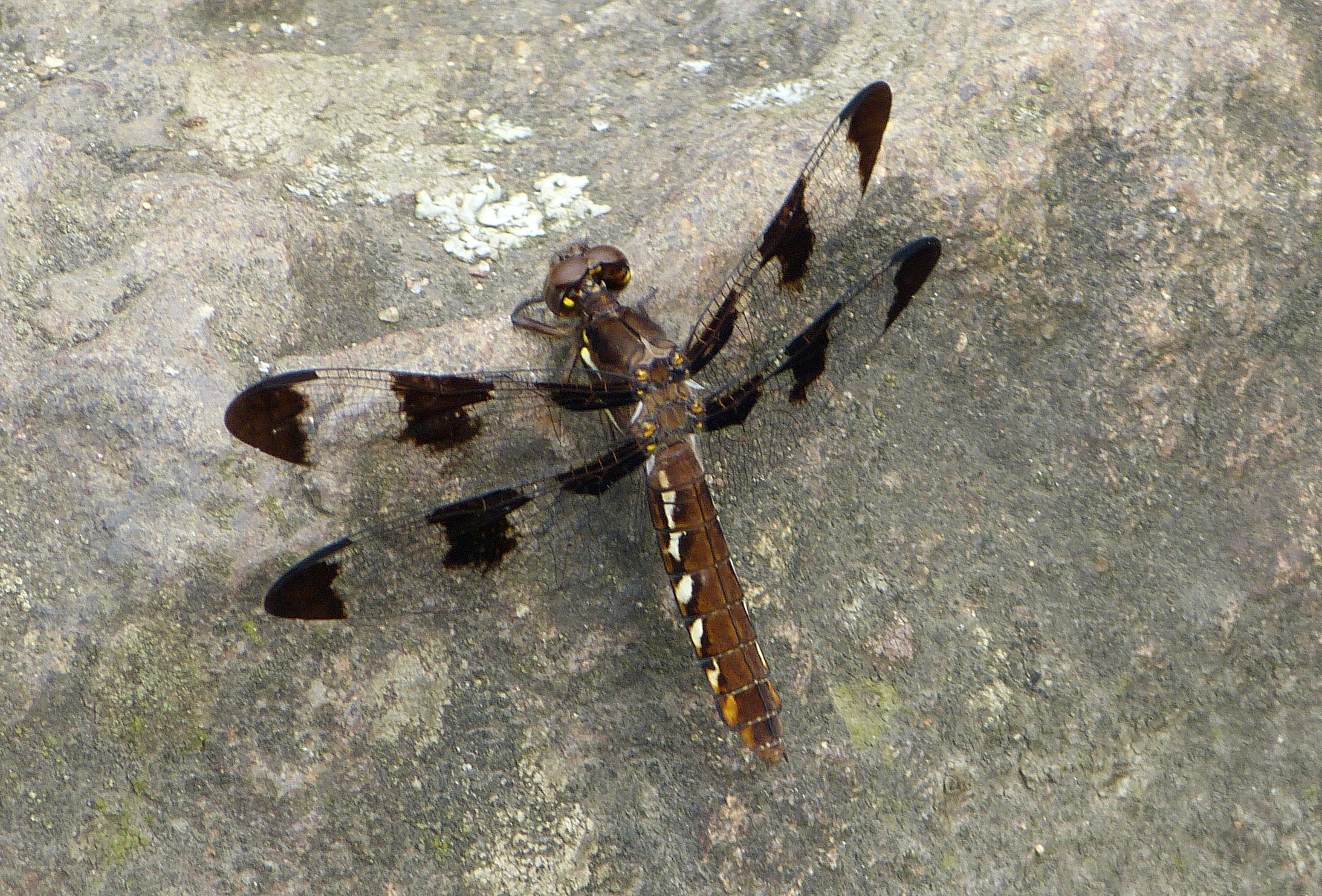 This female Common Whitetail does not have a white abdomen and has three black patches on each wing Photo: Bob Mayer

Perhaps the most striking large ode flying lustily around the ponds in the Arboretum is the Twelve-spotted Skimmer: 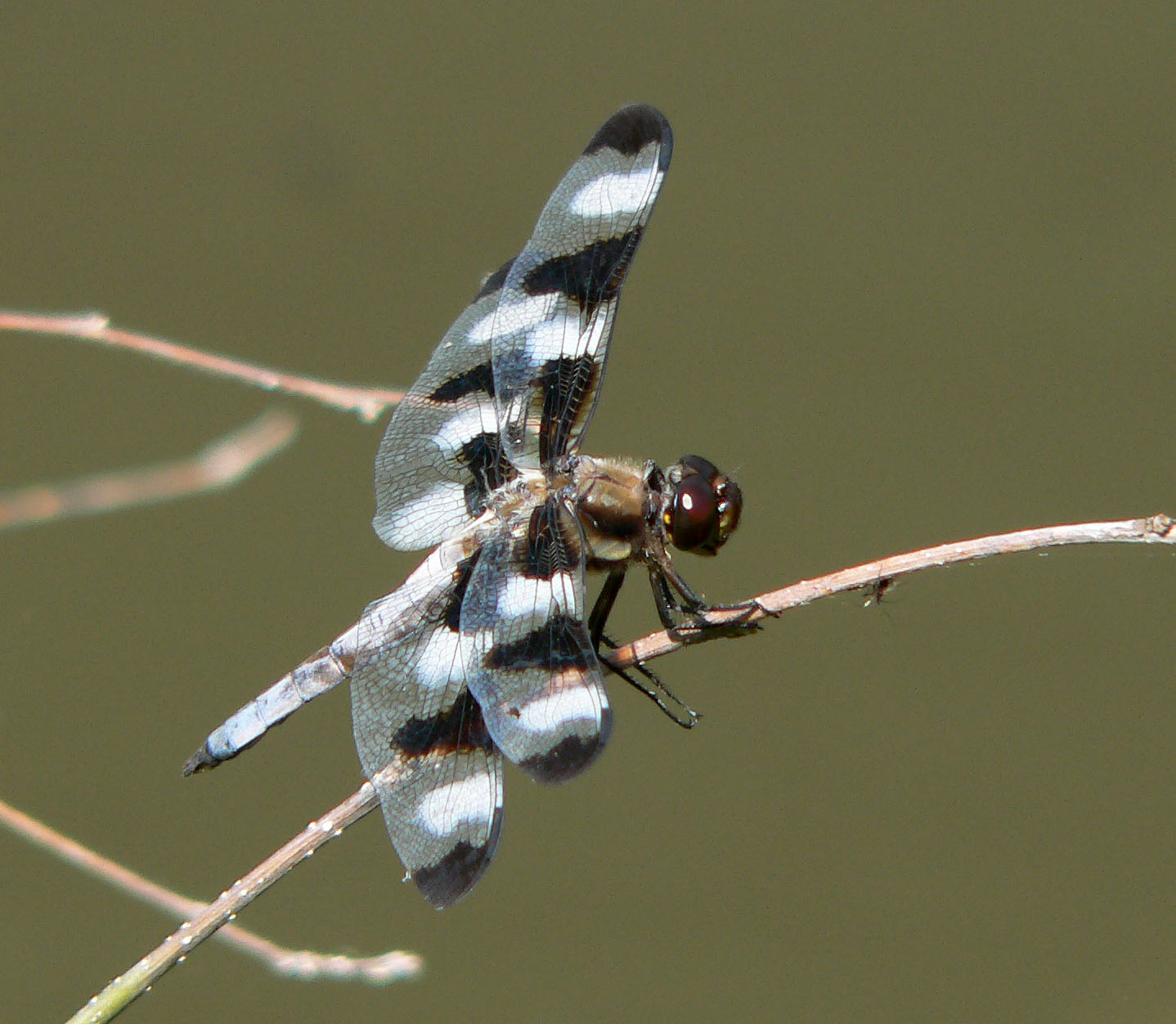 Twelve-spotted Skimmer male. They are named for the three black spots on each wing but the white patches in between are what makes this ode shine. Photo: Bob Mayer

Once again the female is less flashy, and closely resembles the female Common Whitetail: 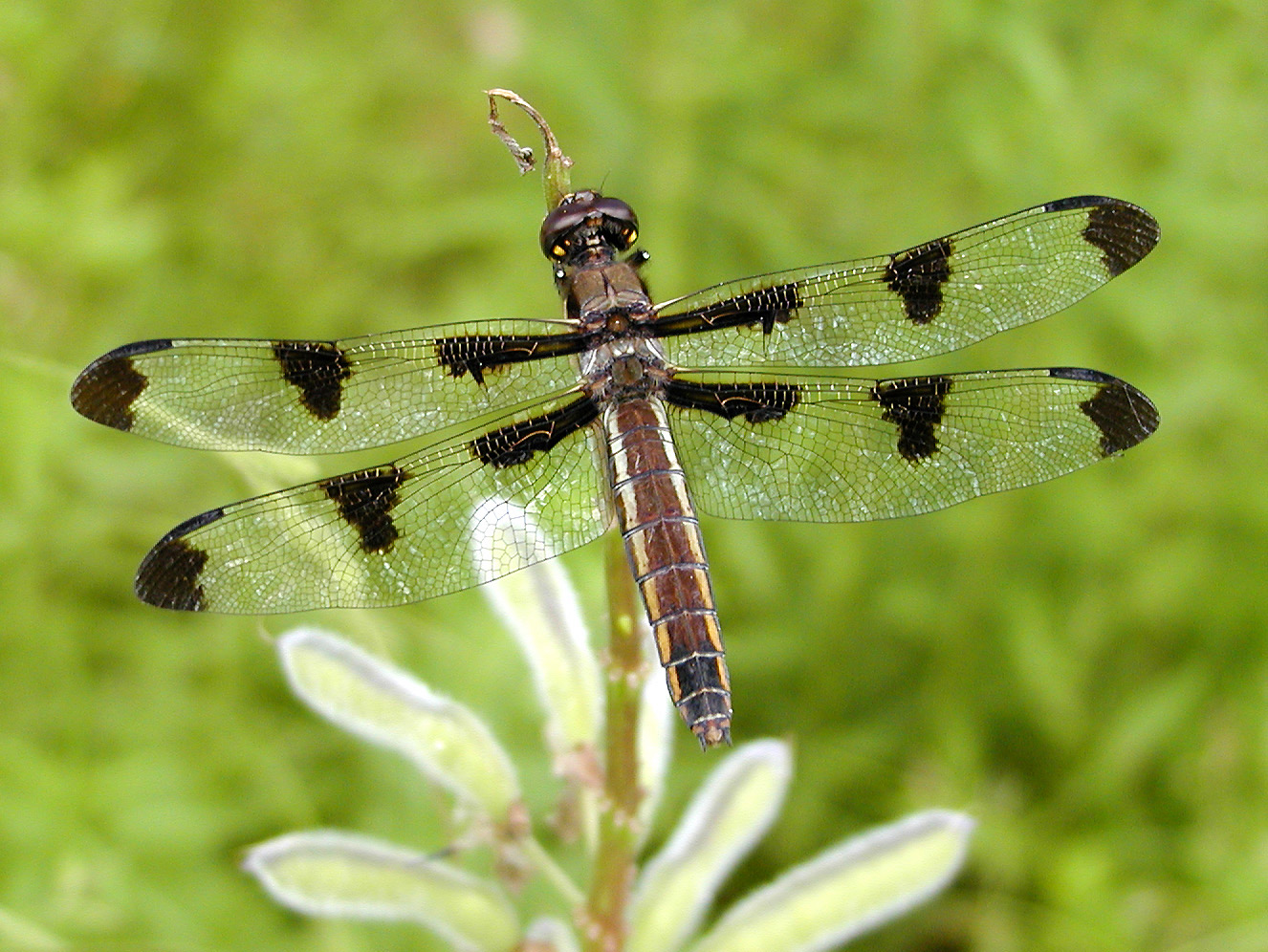 Much less common, but equally flashy, is the male Widow Skimmer:

Widow Skimmer male. The single large black band and white patches on all four wings are diagnostic for this species. Photo: Bob Mayer

The female lacks the white on the wings: 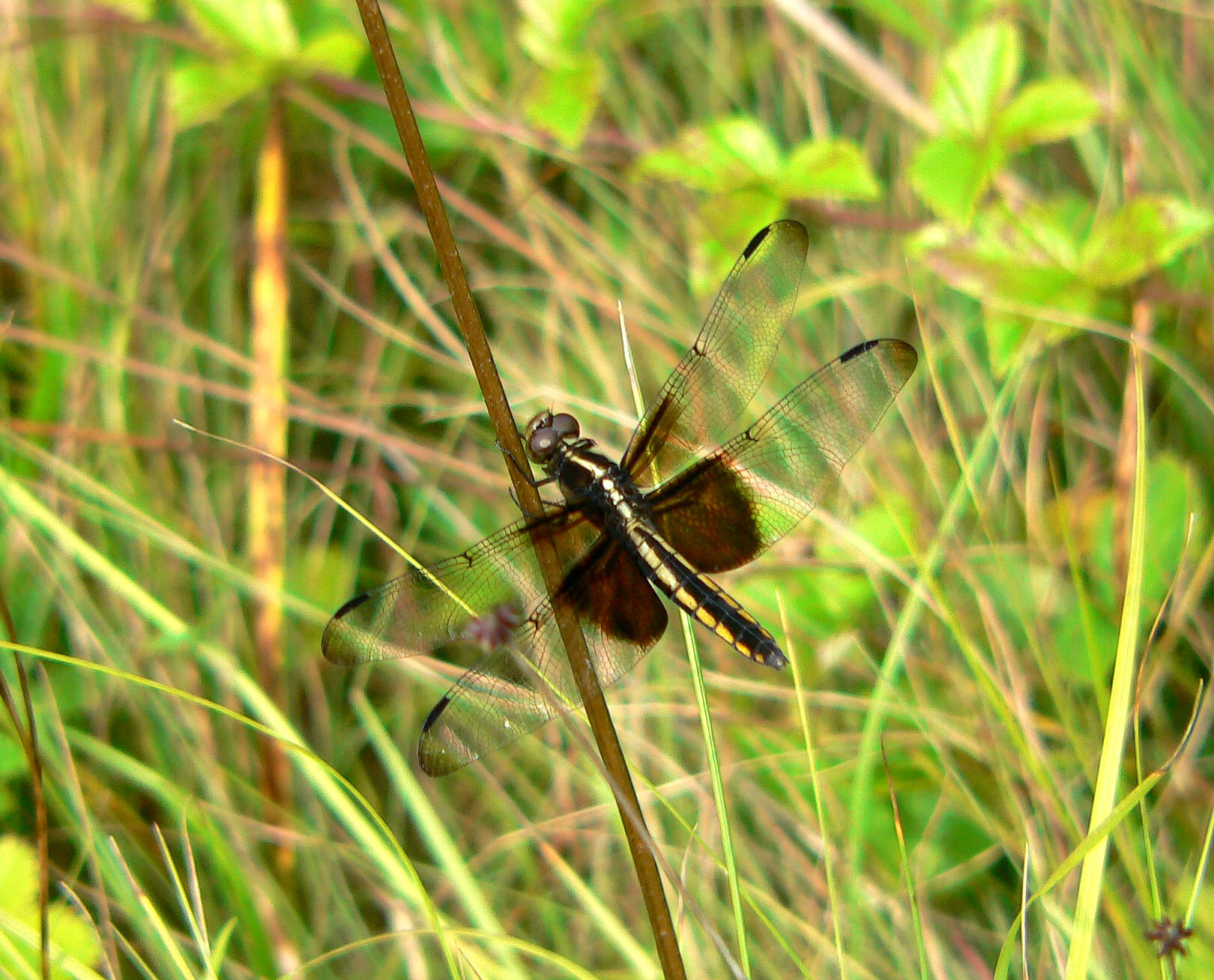 This female Widow Skimmer could be easily confused with other skimmers without careful observation. Photo: Bob Mayer

There is another large skimmer which frequents the ponds, seen here resting on a plant at pond edge: 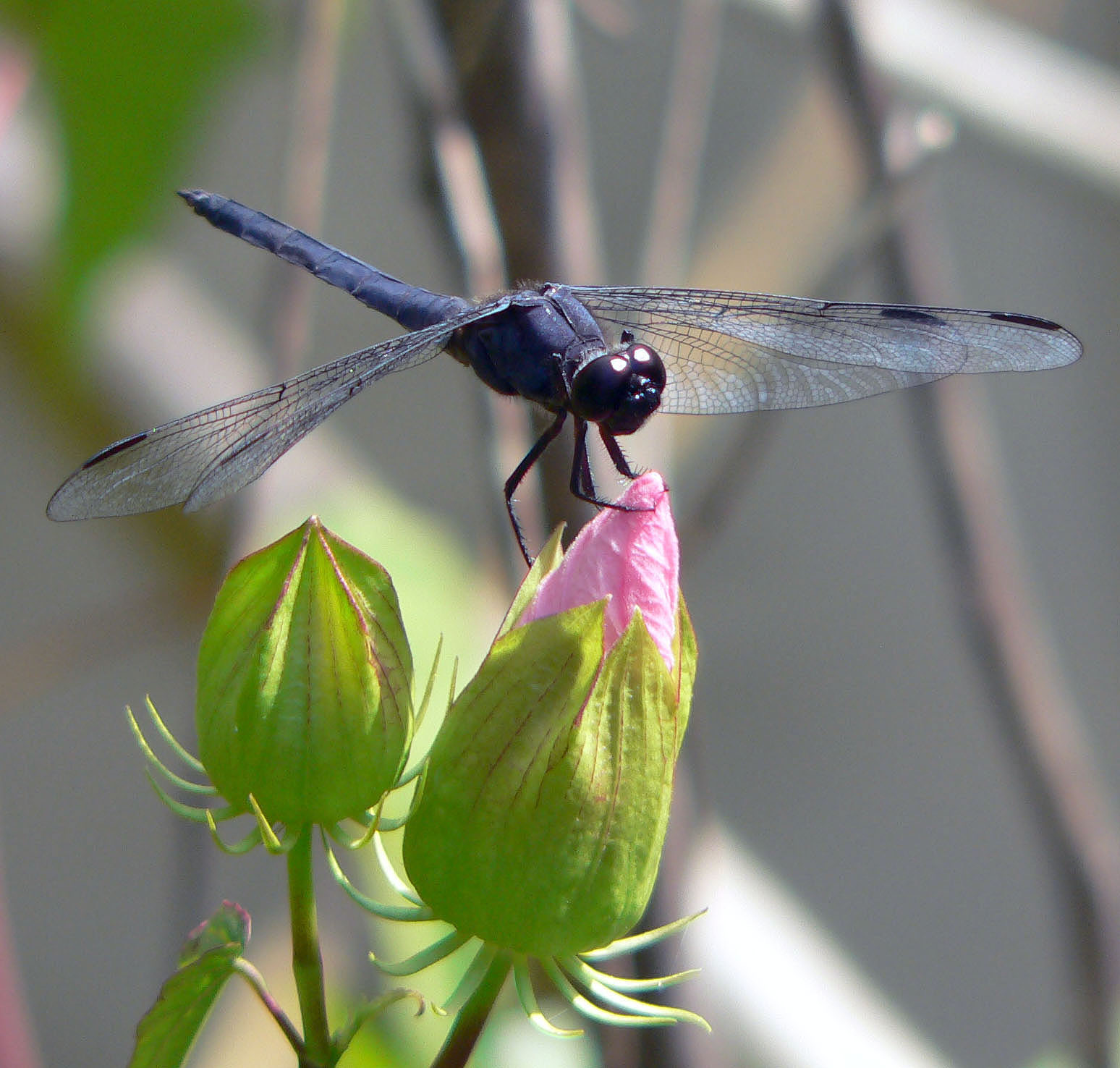 Male Slaty Skimmer on Swamp Mallow flower.  This species has no wing markings (except for the small stigma seen on most dragonflies) and a uniformly slate-blue thorax and abdomen. The female is a drab brown. Photo: Bob Mayer

Also in the skimmer family is the Eastern Pondhawk: 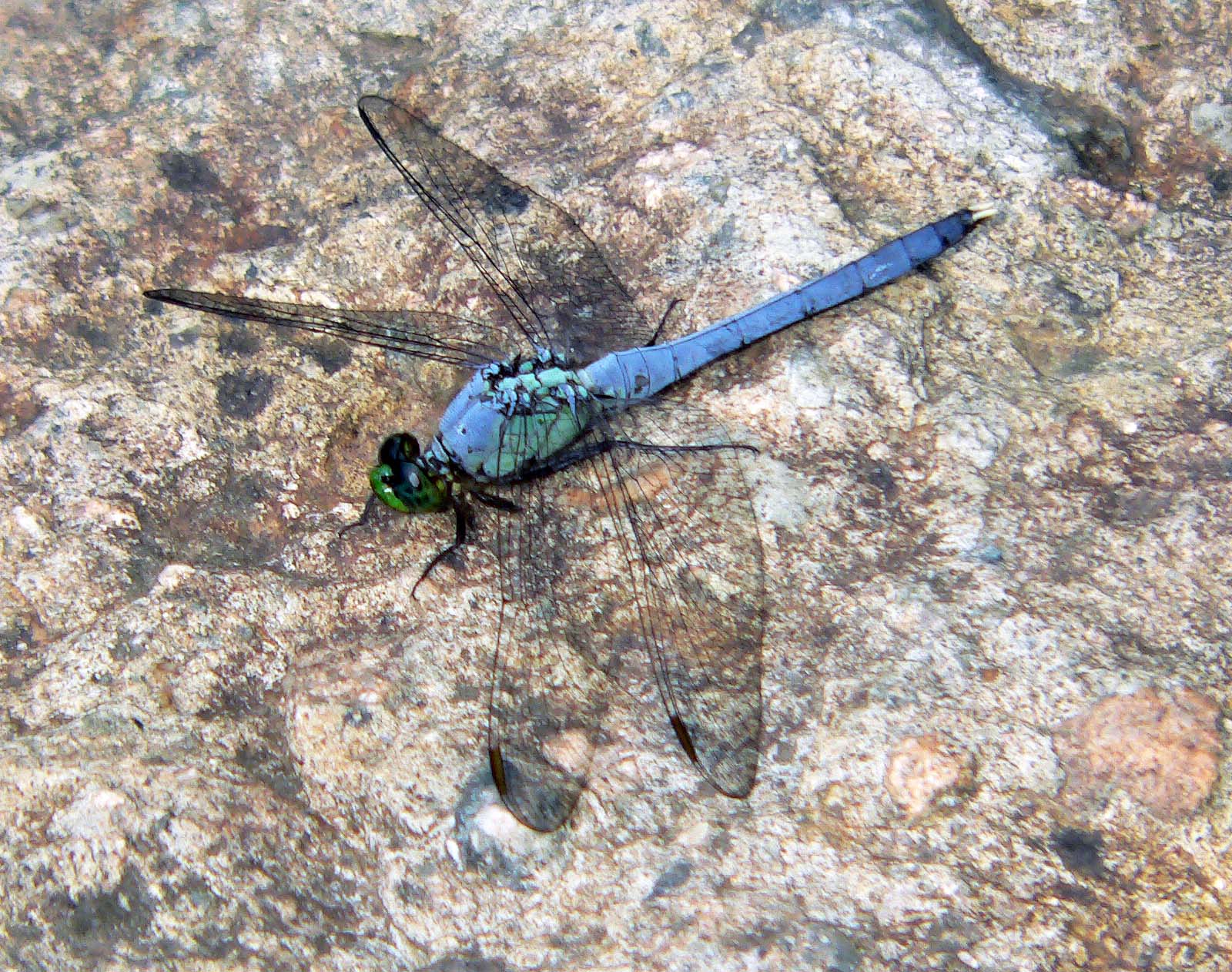 Eastern Pondhawk male. The entire body is blue-green except for the small white abdominal appendages at the very tip. Photo: Bob Mayer

You’re probably expecting the female to be drab; not so with the Pondhawk: 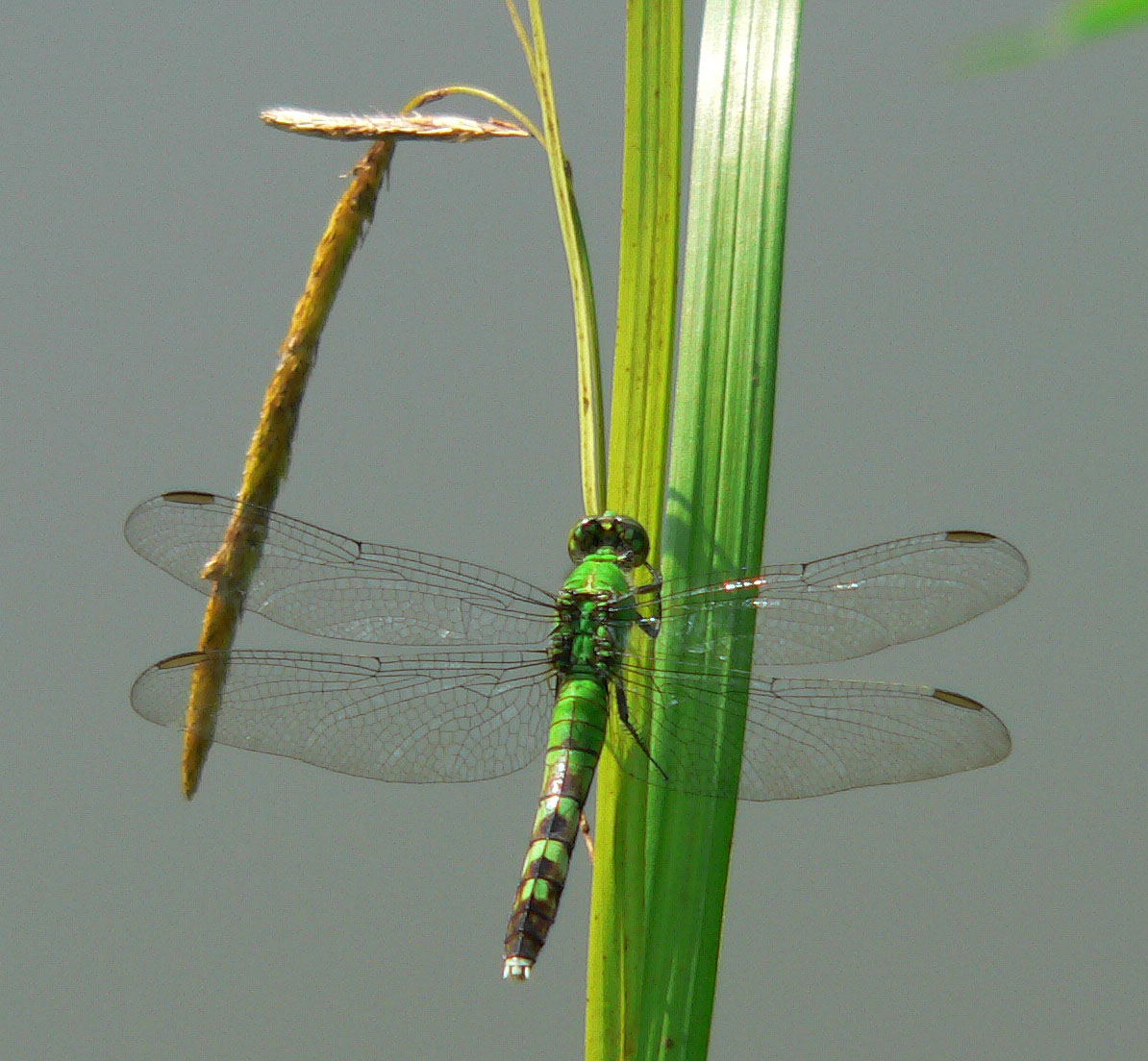 The female Eastern Pondhawk is at least as colorful as its male counterpart. Photo:Bob Mayer

Finally I should mention two more members of the skimmer family that are actually in the same genus, Spot-winged and Wandering Gliders.  The former shows up earlier in the dragonfly season (which is early June through mid September) and is less colorful than the Wandering Glider, which is golden in color.  The characteristic flight behavior of these stocky odes is that they spend long periods in gliding flight, with interspersed bursts of flapping, but they seldom perch. That’s the reason I have no photos of either!  But their flight patterns give them away when they do show up at the ponds or over open fields in the Arboretum.

In a subsequent post I will discuss some other odonates that can be found on the AA grounds, often at some distance from open bodies of water.  In the meantime please check out the ponds, especially in the mid-day. You will almost certainly see some beautiful dragonflies if you look carefully!

There will be an [“Insect Mob” on Monday August 12th at 4:00 PM starting at the ponds in the Arnold Arboretum. This brief field visit will be led by an expert on dragonflies from Harvard’s Organismic and Evolutionary Biology Department.  Check it out if your available then!