I began this blog with a post on Owls in the Arnold Arboretum just over a year ago, so it seems time for an update on these very popular birds of prey.  The winter of 2012-13 was the year of the Barred Owl; an irruption of this species from northern forests produced many sightings in our neighborhood and throughout Massachusetts.  Here is one seen back in December of 2012: 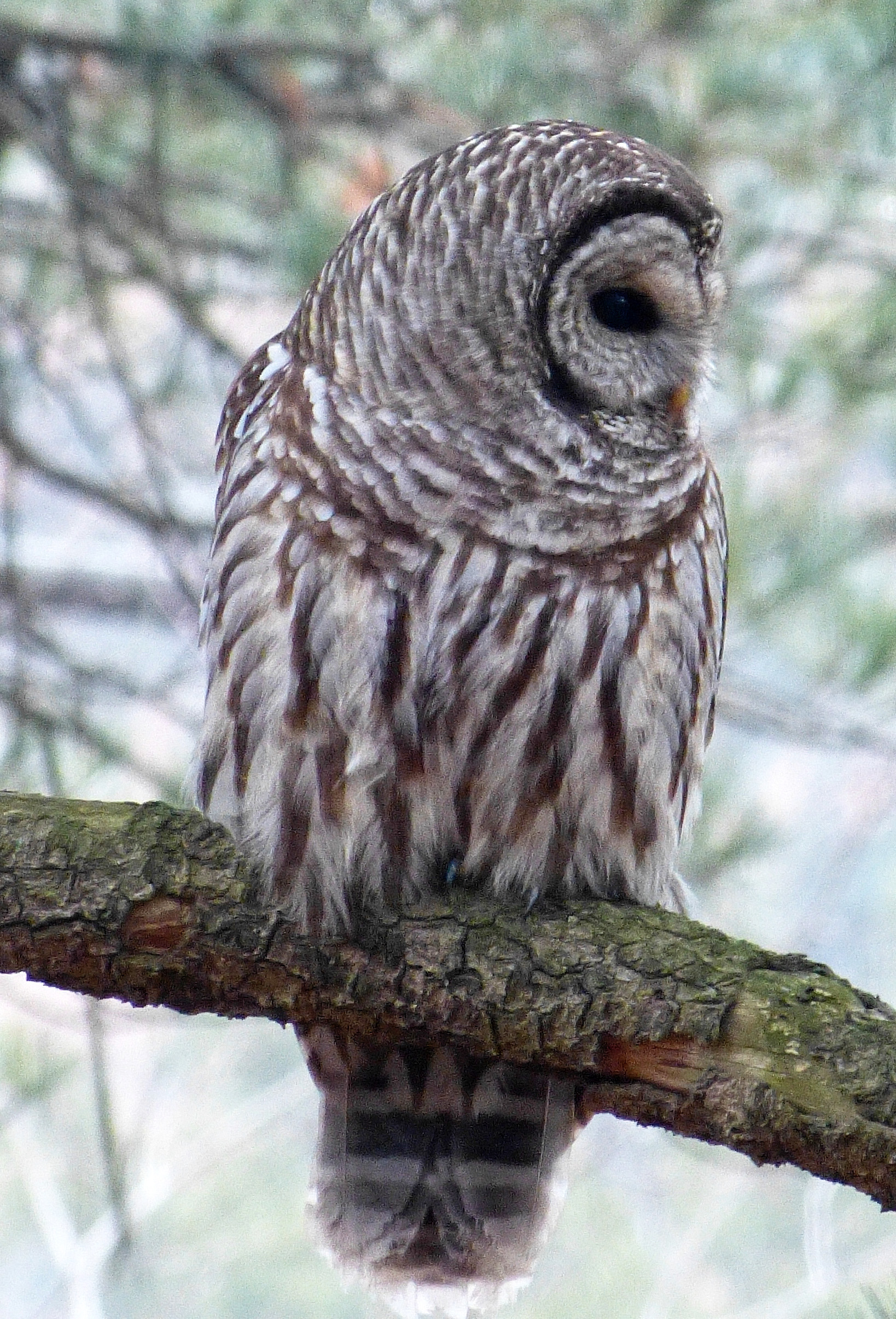 Barred Owl in the conifer section of the Arboretum. Photo: Bob Mayer

This winter there have been only two sightings of Barred Owl in all of Suffolk County.  Rather than suggesting a decline in the species, this is likely a variation based on such things as weather, breeding success and food supply.

This year’s “owl of the year”, as many of you have probably heard, is the Snowy Owl.  Speculation is that this erratic migration into southern climes as far down as Bermuda, was due to a highly successful breeding season in 2013 in the arctic tundra, followed by an insufficient lemming population as the year progressed.  In any case sightings of this owl, the largest by weight of all North American owls, have been greater than in a half century of records in Massachusetts.  An Audubon owl expert who traps snowies  at Logan Airport, and moves them to areas safer for both birds and airplanes, has trapped a record 90 owls this season.

So far there has only been one report of a Snowy Owl in the Emerald Necklace in 2014 – on the first of the year at Jamaica Pond.  I saw one at Castle Island in late December 2013, when I scoped the Logan runways and found one in the distance.  As I continued my walk along the Pleasant Bay causeway someone put me onto a much better sighting; this beauty sitting on a corner of Fort Independence:

Closer to home there have been other developments in the owl world over the past year.  As I reported in a post in April, the locally famous one-eyed female Great Horned Owl successfully raised a pair of owlets in Forest Hills Cemetery last spring.  There is an early report that she is sitting on eggs again this year, but the location of the nest is being closely held so as not to disturb the pair at this critical time. Great Horned Owls are the earliest bird species to nest in Massachusetts.

Another occurrence of nesting Great Horned Owls this year did not turn out as well.  Back in May I was told by an Arboretum staffer that a fledgling owl was found injured beneath a nest in a White Pine atop Bussey Hill.  It was taken to a rehab center where it had to be euthanized due to a badly broken wing.  As a second owlet was said to be at the nest I went there right away.  I was too late; I found the nest but no owls. Not far away I discovered this grisly scene: 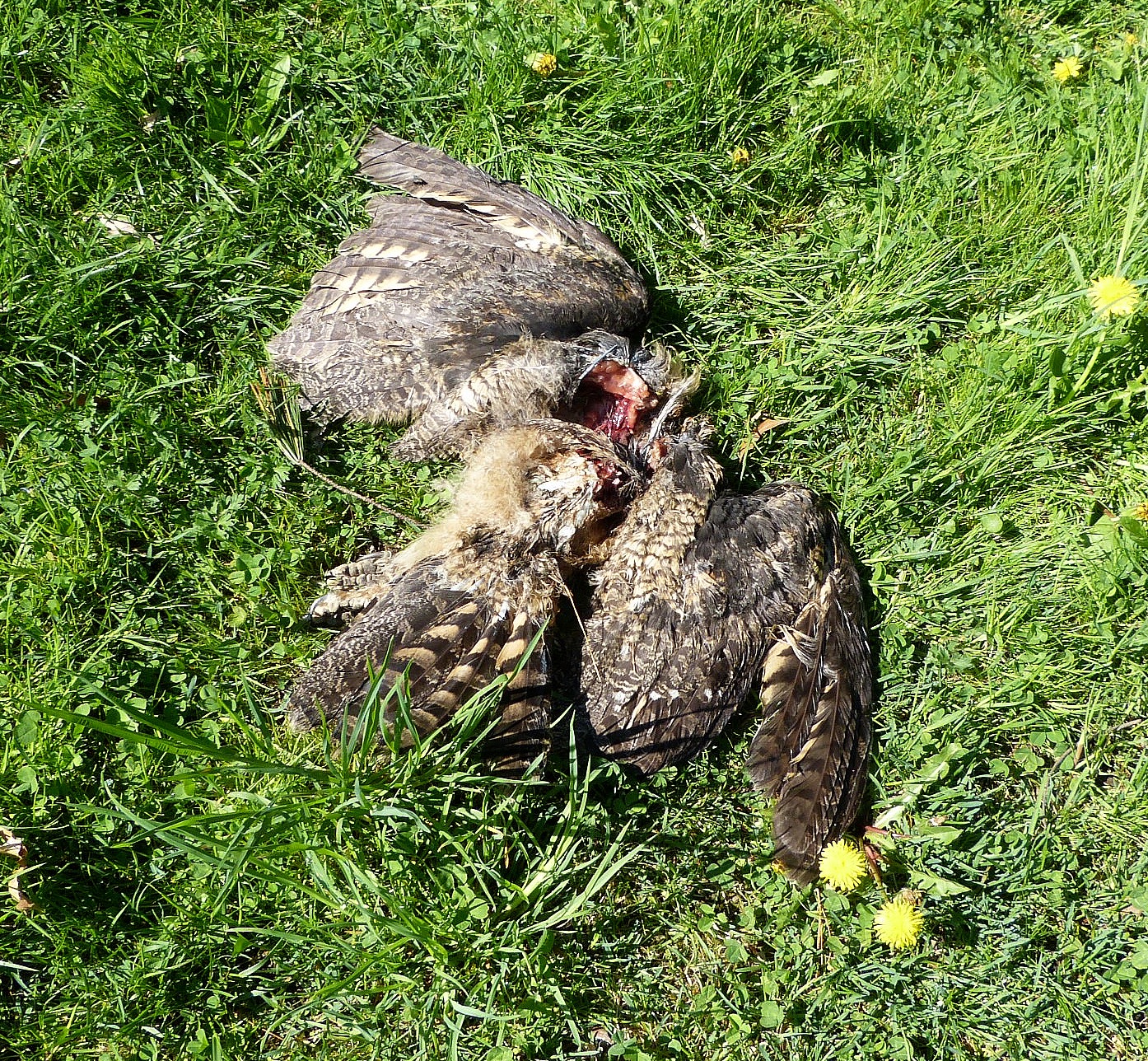 Dead Great-horned Owlet. This bird looked to be fully fledged. It had been decapitated by some predator- perhaps another owl, a crow, hawk or four-footed predator while on the ground. Photo: Bob Mayer

This winter I went back to the site to see if there might be a new nesting attempt in the old nest (common with Great Horned Owls) but discovered no owls and also no tree!  The specimen had been deemed unhealthy and had been cut down.

I end this post on a happier note.  About two weeks ago the same staff member that had put me on to the Great-horned Owl nest in the Arboretum emailed me about an Eastern Screech Owl that was sunbathing in a hole in a tree along Meadow Road near the ponds.  This time I was not disappointed: 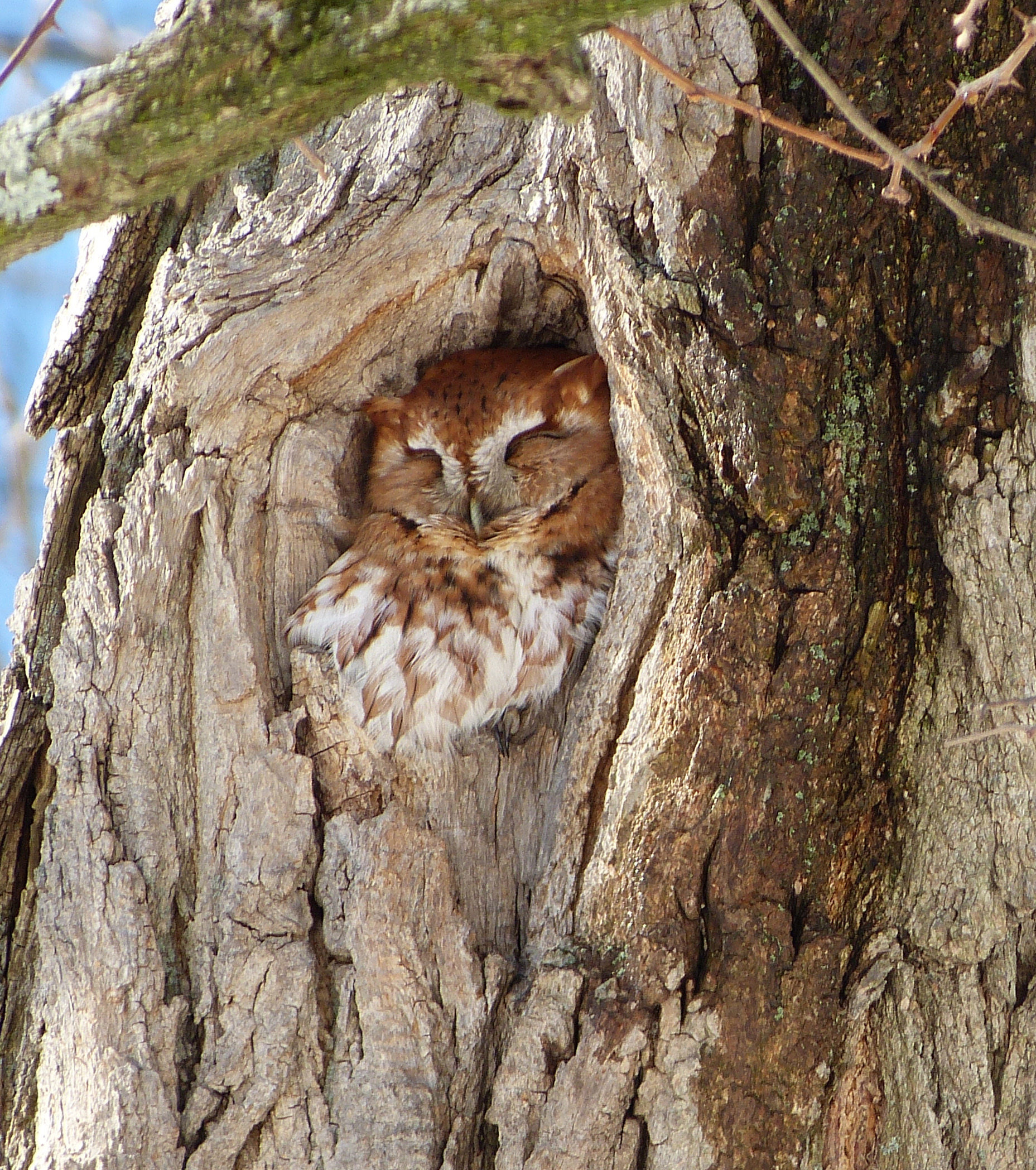 Eastern Screech-Owl, red phase. This species also has a gray coloration. The colors are not gender specific. Photo: Bob Mayer

The bird has been seen in this roost hole on most days since it was initially found so it may stick around for a while.  To find it (or at least the hole) follow these directions:

The roost hole is an accessioned tree with a black tag, Robinia pseudo acacia 23173-C, and is on the right of the road coming in from the main entrance; it is just at the end of a wooden fence as you reach the legume section and about 100 yards before the ponds. The tree leans heavily toward the road and the hole is about 30 feet up. The owl is best seen from the pond side looking back.

Screech owls don’t lay eggs until mid to late March so this is not a nest.  Nesting owls are given special attention by the birding community to try to avoid disturbance that might cause the female to abandon the nest.  Perhaps this owl will pair and mate and nest somewhere in the Arboretum; they have done so in the past. If I find the nest site, I’ll never tell!

I’m leading a winter bird walk on Saturday March 22nd beginning at 8:00 AM and starting from the main gate off the Arborway.  Perhaps the owl will still be there. We also should see the real harbinger of spring by that date.  Spoiler alert – it isn’t a robin!  Join me.