As a City of Boston park, the Arnold Arboretum is officially closed from dusk to dawn, prime time for owls. They can also be found in the daylight hours – often revealed by crows or Blue Jays mobbing (harassing) them in their daytime roost, or by hearing their distinctive calls. The commonest owl in the Arboretum is the Eastern Screech-owl, a diminutive species (about 8 inches tall) that often holes up in tree cavities where they may be seen sunning themselves.  They are known to nest in the Arboretum and young birds have been reported there in the Spring. 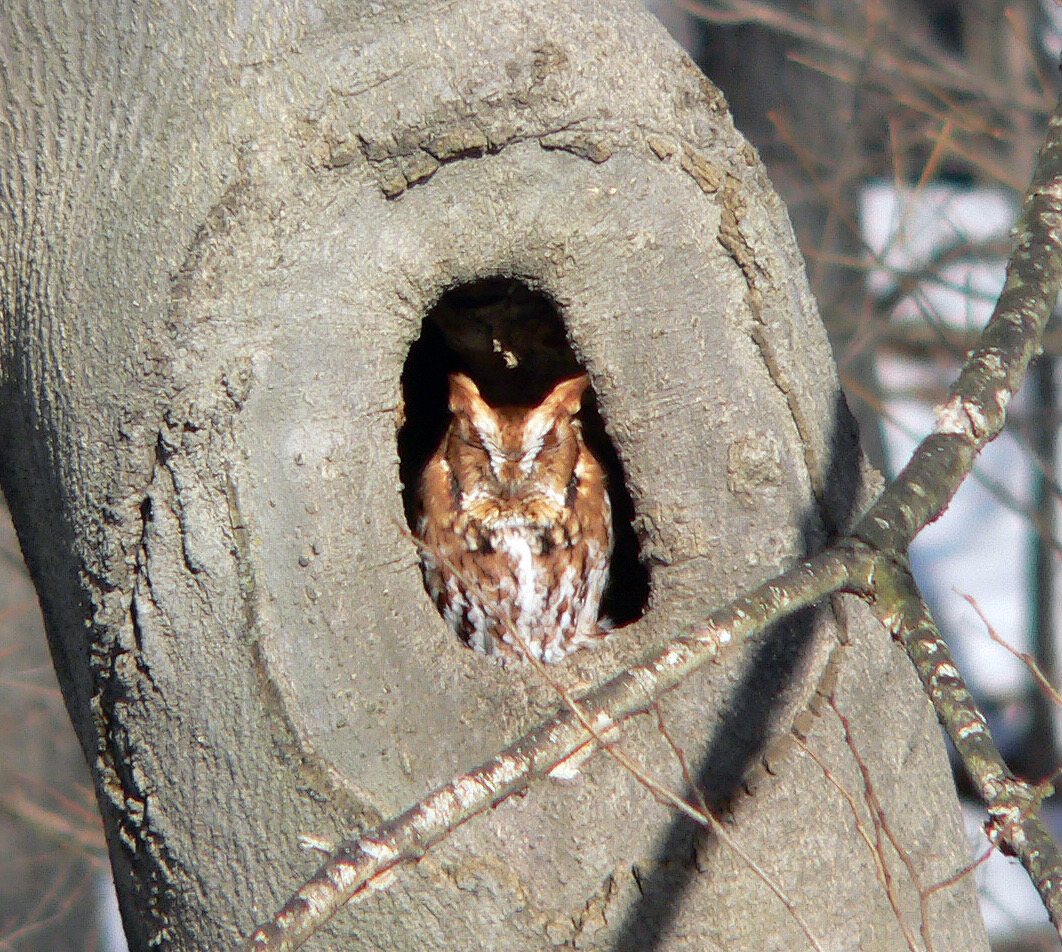 This is a red morph screech; others are gray.  On the Christmas Bird Count in 2012  night-owl birders found four screech owls in the Arb by playing a recording of their calls before dawn.

This year there has been an irruption of Barred Owls in Massachusetts, and at least one has taken a liking to the conifer section of the Arb. Irruptions of birds usually occur due to compromises in the food supply for that species; in this case the supposition is that a poor acorn crop in 2011 led to a marked reduction in the small rodent population-the Barred Owl’s main food source. This has brought hungry owls into very urban locations; the Boston Common, the Public Garden, the Fenway and the Arboretum. I caught sight of this beauty in early December just off Hemlock Hill Road: 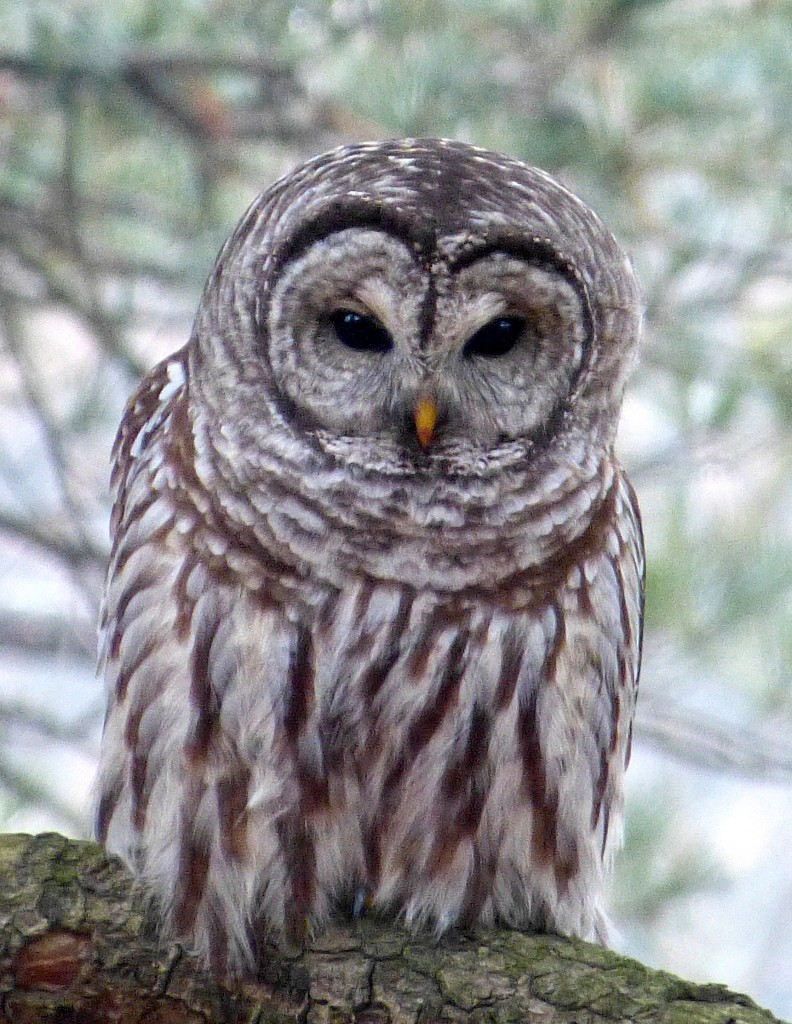 A careful look shows that she/he has some blood on the bill indicating a forceful connection with some rodent recently.

Next up on the size scale, but less frequently seen, is the Great Horned Owl: 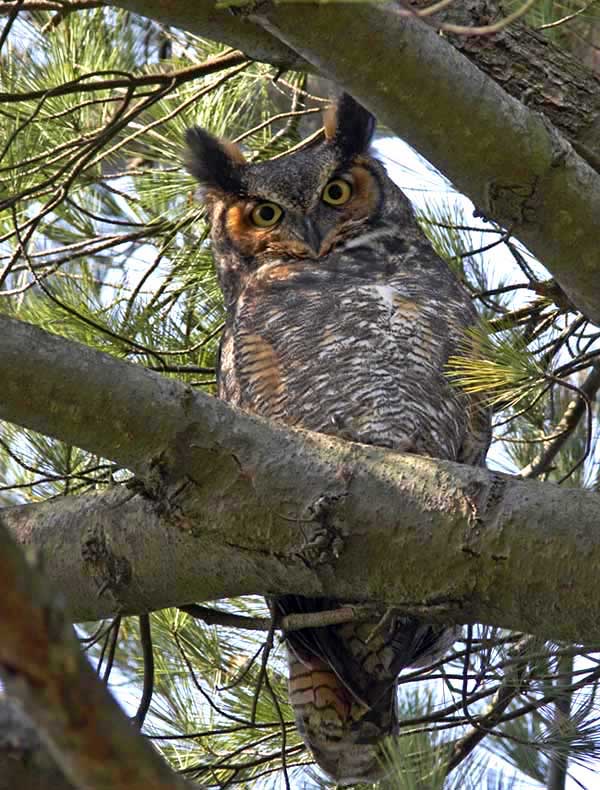 Just a bit larger than Barred Owls (22 versus 21 inches) Great Horned Owls are very adept at staying hidden during the day.  Sometimes “whitewash” (owl excrement) or pellets of hair and bones disgorged by owls after a meal will mark a favorite roosting site: 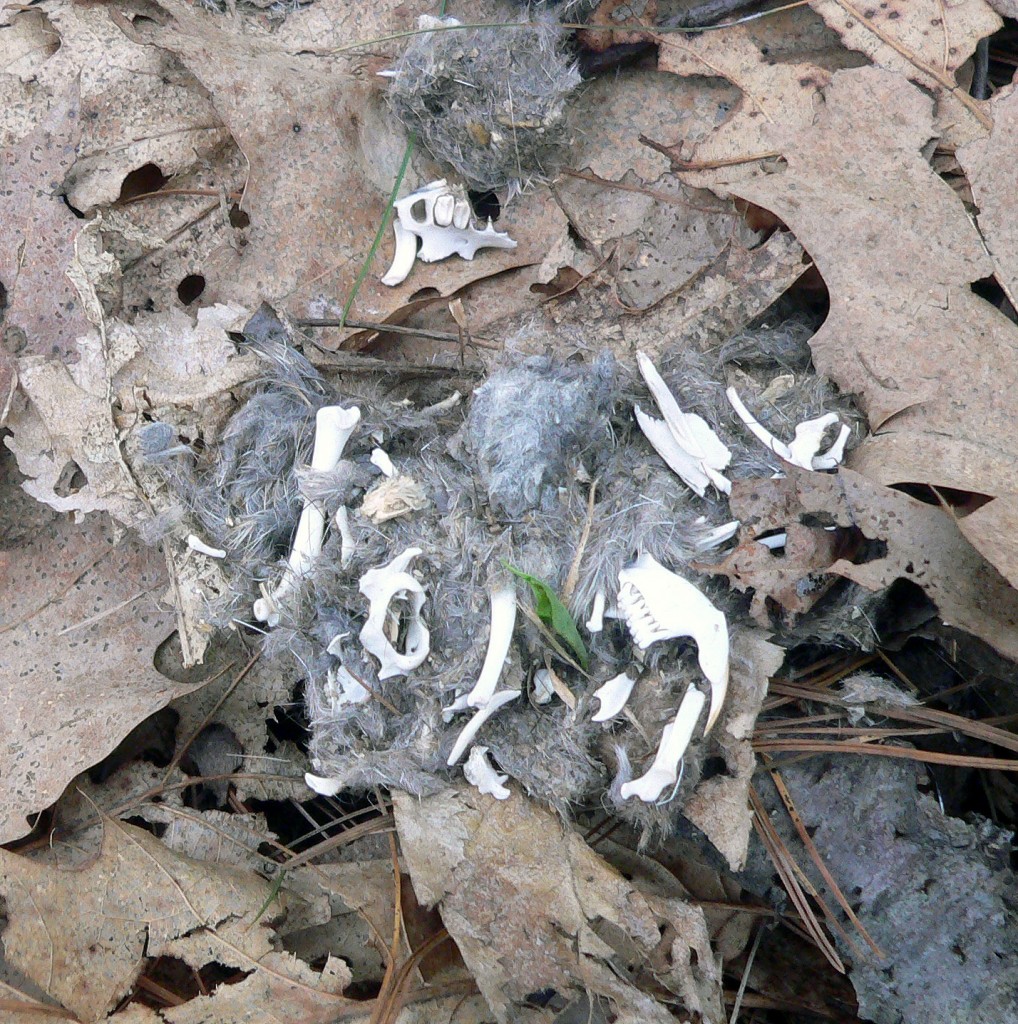 Back in the mid-nineties, a pair of Great Horned Owls nested on Hemlock Hill. Many visitors watched the family grow and the young fledge from the nest. Since then there has not been a confirmed breeding of this species on the grounds; most of the local nests have been in nearby Franklin Park.  In recent years however, breeding there seems to have stopped. The reason is thought to be due to the loss of an alpha male bird (nicknamed “Ben Franklin” by a local naturalist) who had successfully paired with several local female Great Horned Owls.  The Arboretum played a role in that sad tale.

On the day after Christmas in 2008, I got an email from a birding friend reporting that a Great Horned Owl was sitting out in the open in a large oak near the beech collection off Valley Road. It was being attacked by several crows but refused to move; my friend suspected it was injured. I went to the site and found the birds: 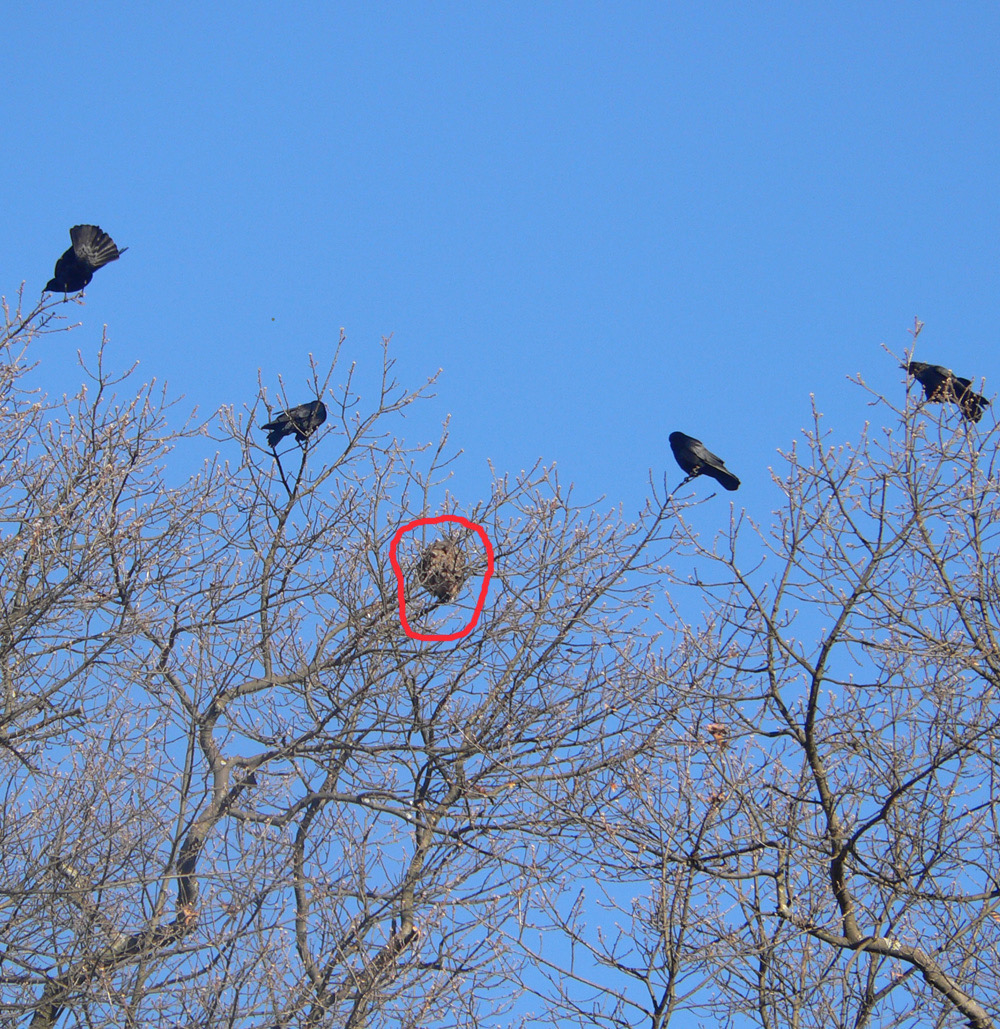 A friend who is both a birder and a tree climber responded to a phone call and joined my vigil. He proceeded to don climbing gear and ascend the eighty foot oak where the owl rested (we assumed a first responder status and broke the ban on tree climbing in the arboretum).  In a relatively short time the bird was in hand, further evidence that he was significantly impaired. The sequence of the catch is shown below, clockwise from the upper left: 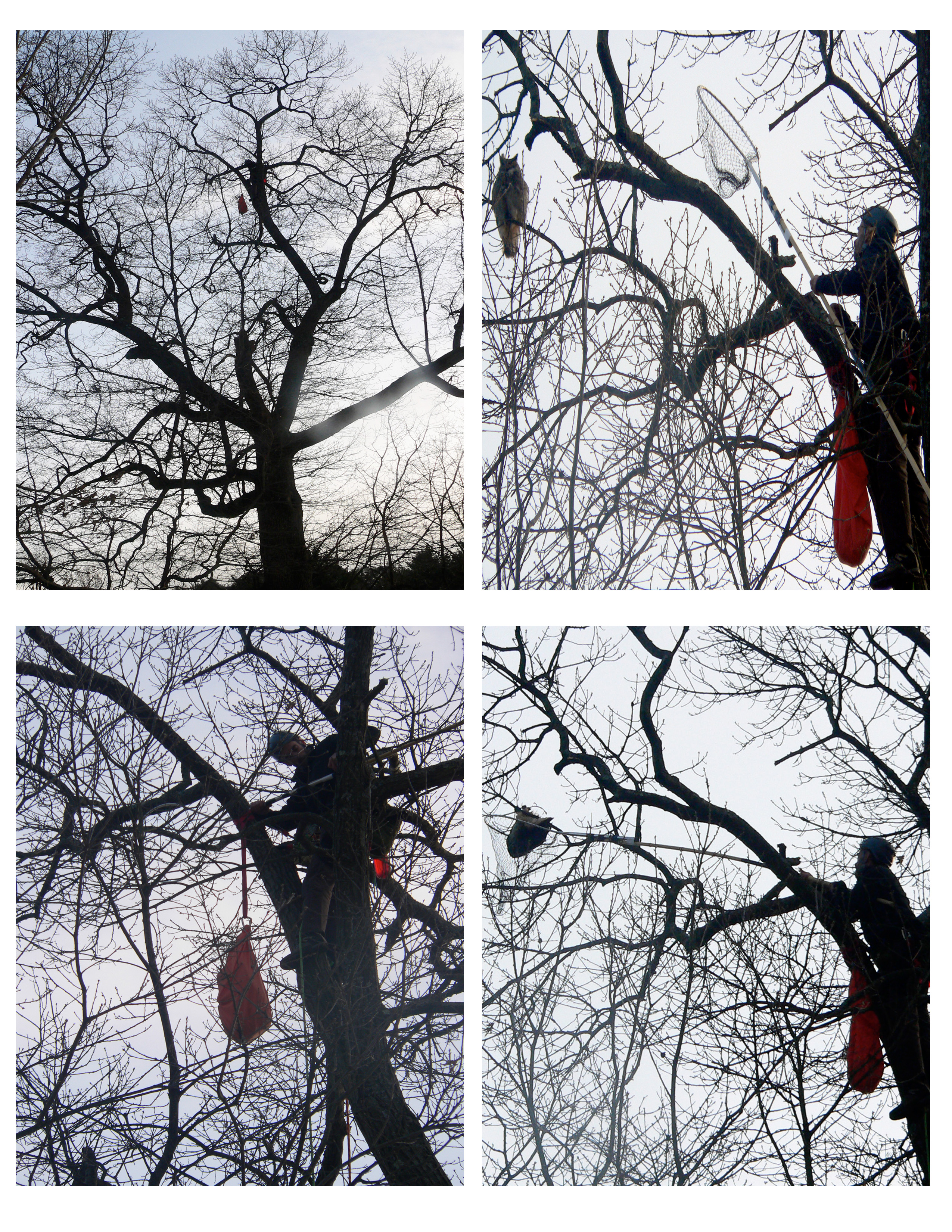 Capturing a Great Horned Owl. Clockwise from upper left: The tree with owl followed by the capture
Photos: Bob Mayer

The bird was taken to Tufts Veterinary School but died shortly after arrival. Necropsy indicated it had suffered severe blunt trauma, likely from a vehicle strike. As the females in Franklin Park departed not long thereafter we presume the lost bird was Ben. Hopefully another robust male will soon claim the territory and we will continue to hear the mournful call of the Great Horned Owl in the neighborhood.

Of the nine species of owl documented in Suffolk County since 1900, only the three species discussed above are likely to be seen in the Arnold Arboretum. But keep your eyes and ears at the ready for them or possibly even a Snowy, Saw-whet or Boreal Owl that may appear or be heard hidden somewhere in the dense canopy of Olmsted’s forests.