In the winter I probably get more questions from casual birding friends about bird feeders than anything else. Should I or shouldn’t I? What kind of seed should I buy? Should I splurge on pre-shelled seed? How do I get rid of those hungry squirrels? Those damn House Sparrows are eating me out of house and home!  Why don’t the birds come to my wonderful feeder?

Our basic instinct — as we sit comfortably inside, watching those tiny creatures out in the cold and snow — is to feed them.  And for the same winter weather reasons, wouldn’t it be nice to stay inside and still enjoy the birds?

Off and on over the years a debate over whether feeding birds is good for them has persisted.  Some say feeding birds will make them dependent and lazy, like the “hand up not hand out” position on public welfare.  I was only able to find one reference to support that claim, a Swiss study that found that fed males of a common European bird started to “sleep in” — beginning their mating calls later in the morning — a practice that might be nice for the individual bird but isn’t good for natural selection to advance the species.

There are lots of other arguments expounded: here is a fact or fiction review of some of them. My position is that if the Cornell Laboratory of Ornithology, the American Birding Association and Massachusetts Audubon all promote bird feeding at least in the harsh winter months, it can’t be all that bad for birds.

There are some important ground rules however. Use fresh seed each year and keep feeders clean; washing with a 10% bleach solution will work. Think about how many animals are eating from the same feeder – if one of them was ill, the disease could travel to the species who visited your feeder, who then go bring it to your neighbor’s feeders…and so on, and so on…

In particular, there is an avian conjunctivitis that can spread in the feeder crowd. House Finches have high sensitivity to this illness that can lead to blindness. Their susceptibility is thought to be due to the fact that the eastern House Finch population originated entirely from a small number of pet birds released in the 1940s; they are highly inbred, exhibit low genetic diversity and have lower immunity to disease.

So if we’ve decided that it’s all right to provide food for birds, what should be laid at table?  The most popular food used by birders is sunflower seeds.  Many of the less expensive mixed seeds sold in grocery stores include types less attractive to most seed eating birds — red millet and cracked corn for example. Some bird seed suppliers sell pre-shelled, or “no waste” seed.  This avoids the mess of hulls piling up under the feeder, and killing grass or other vegetation, but it is expensive.  I far as I know the birds are happy to shell their own if esthetics aren’t an issue.  If you are especially interested in attracting woodpeckers put out some suet cakes…that should work: 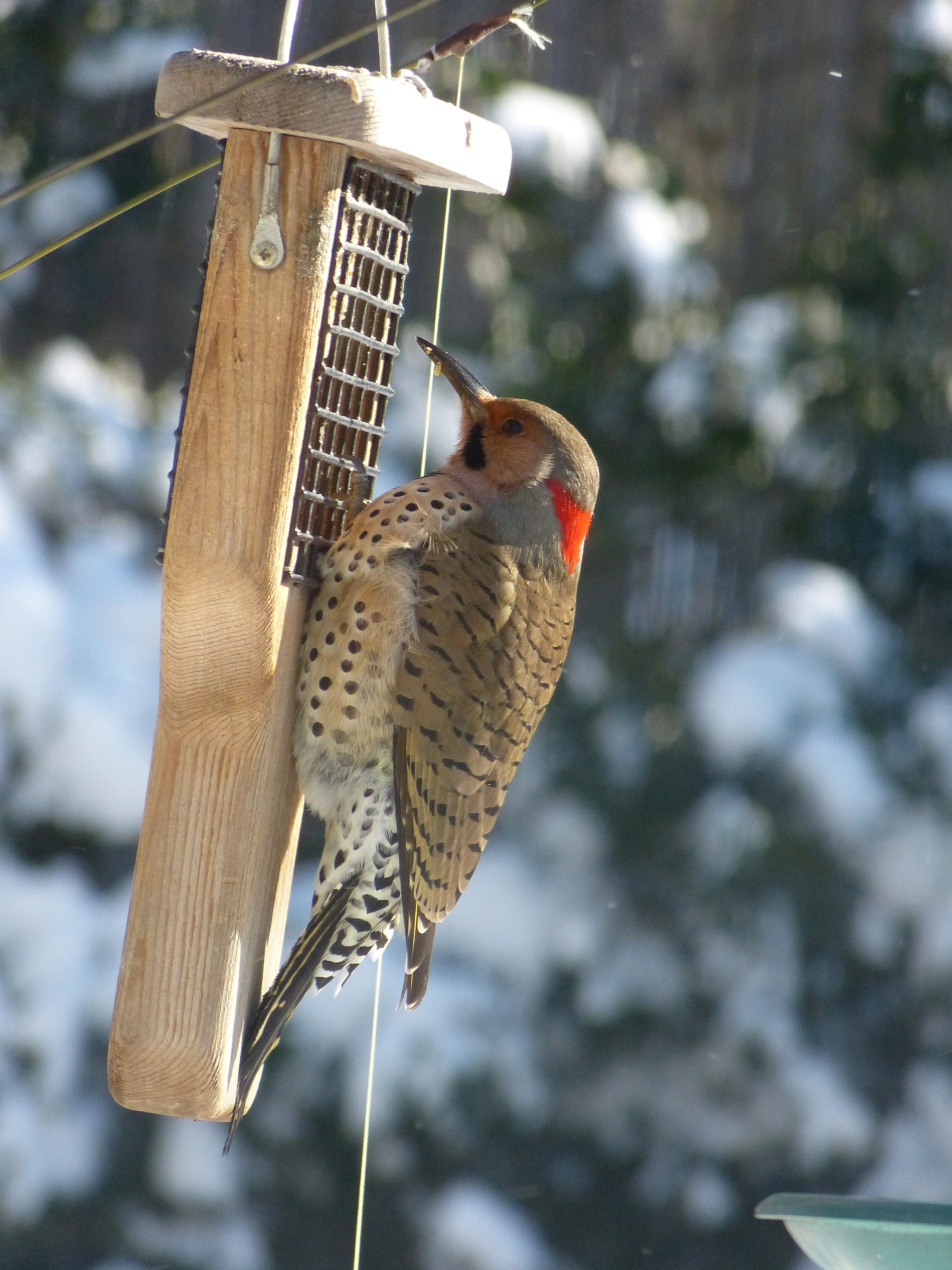 A male Northern Flicker. Flickers do not come to suet as often as other woodpecker species. Photo: Bob Mayer

There is a group of feeder prone birds referred to as “winter finches” and there are irruptions of some of those species in some years (not so in 2014 though).  Last winter was a good year for this perky little bird: 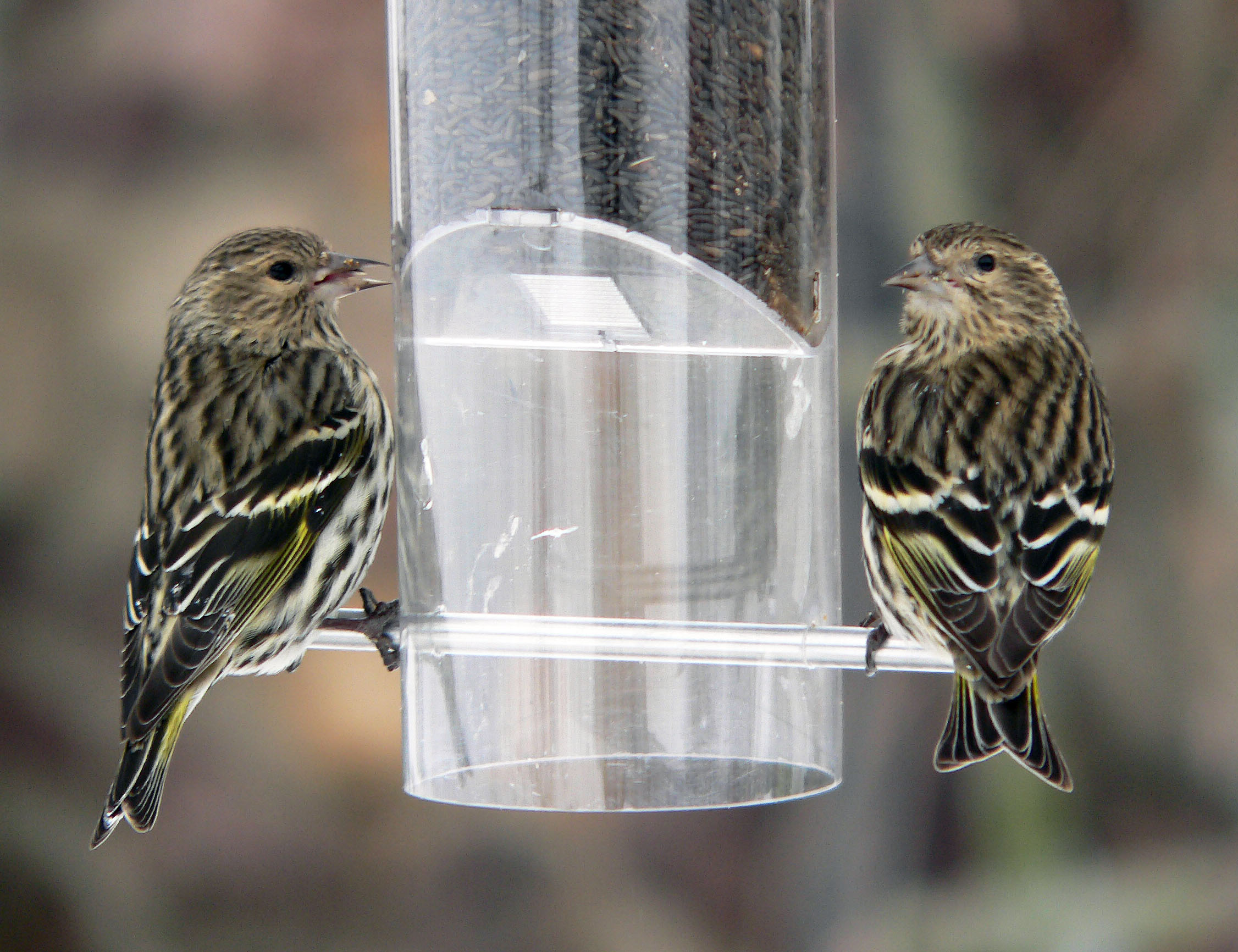 Pine Siskin.  When the northern cone crop is poor these birds head south and often end up at feeders providing niger or thistle seed as seen in the image. Photo: Bob Mayer

Those who get into attracting unusual birds in winter will put out meal worms or fruits like blueberries and orange sections.  I’ve tried to pull in bluebirds with such offerings without success. Last winter though, I posted about a Baltimore Oriole that came to my feeders for seed and was encouraged to stay with orange halves: 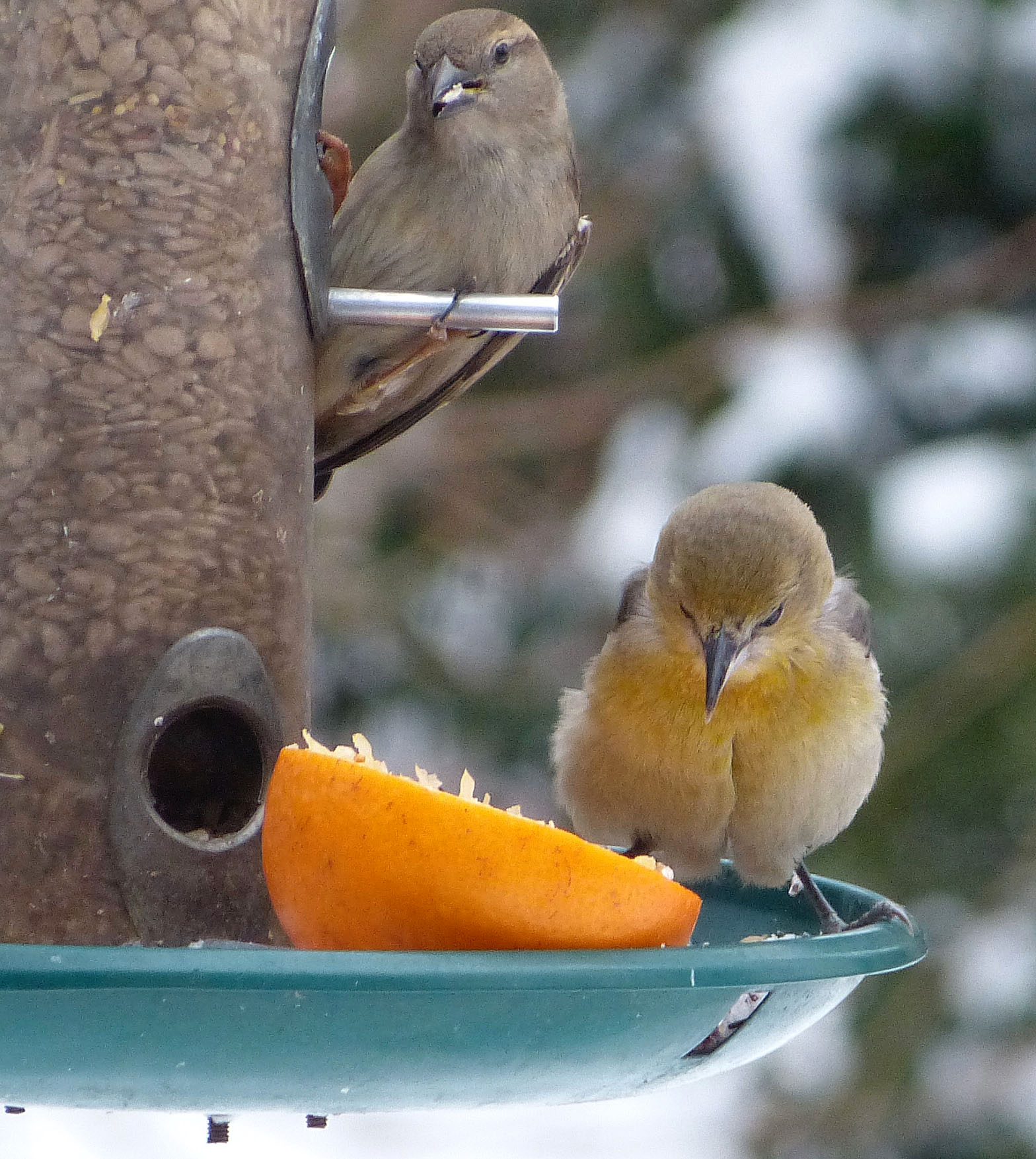 In the last thirteen years I have been lucky enough to see over thirty species of birds at my winter only feeders.  At first I lost a lot of seed to Gray Squirrels that frequent my yard.  Since installing a guard on the feeder post I’ve saved a lot of money.  Squirrels will climb the pole, but can’t seem to get past it. 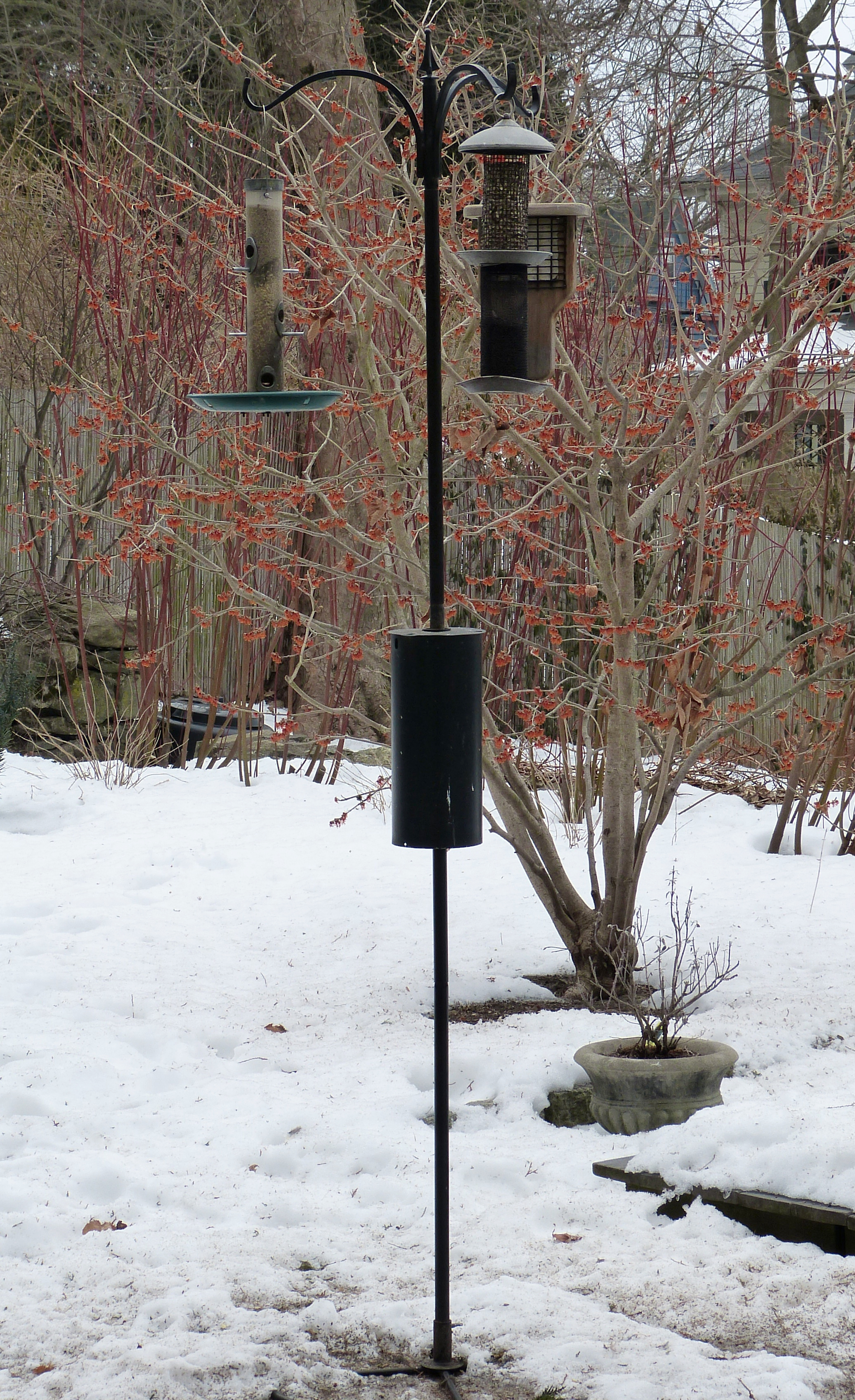 The black guard is an upside-down can that sits on a ring so that it moves if a squirrel tries to climb over it.

For those whose feeders can’t be protected in this way there are other options.  Several online bird feeding sites offer seed that has been treated with capsaicin, the active ingredient in red pepper. Birds are not effected by it, but squirrels won’t eat it. For those of you with a bit of a sadistic streak, there are fancy bird feeders that have a built in spring mechanism that spins when a heavy squirrel gets on the feeder, tossing it away like water off lettuce in a spinner. Who knows, maybe the squirrels like it, although I doubt it.

If you’ve put up a feeder in an urban setting you no doubt have come to curse another seed eater, the non-native House or English Sparrow.  This introduced species, apply named Passer domesticus for their fondness for human dwellings, tends to move in flocks and will eat you out of bird seed as fast as a couple of hungry squirrels,  Once they have found your treasure trove they will keep on coming. This fall I was invaded by 20 or more “limeys” and I decided to try a technique I’d heard about from another urban birder– a so called “magic halo”.

This device consists of a large wire wheel from which lines of string or fishing line are suspended every eighteen inches or so, forming a frail barrier around the suspended feeders.  Here is an image of the makeshift rig I created from wire coat hangers: 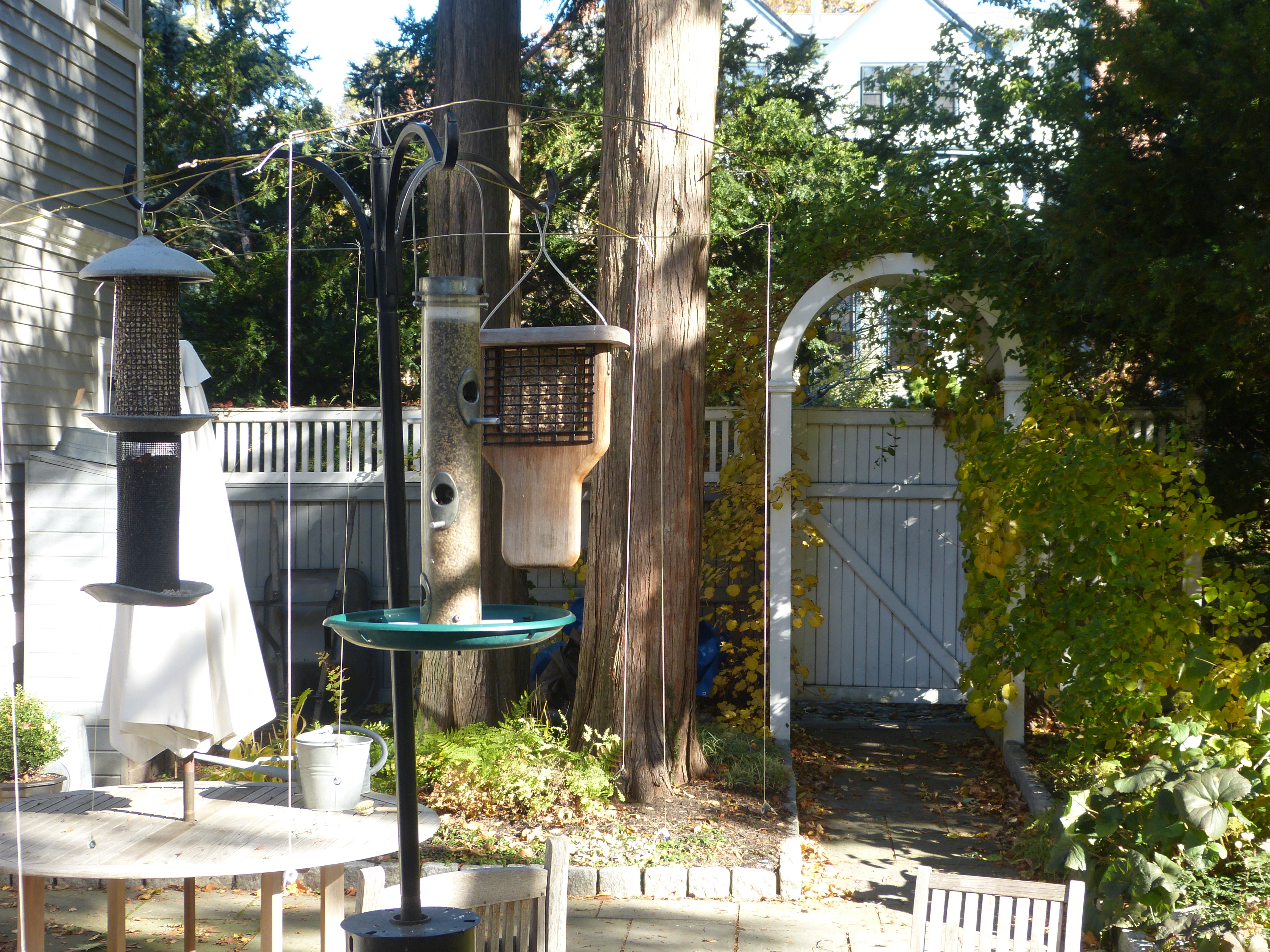 A home made magic halo designed to keep House Sparrows away from bird feeders.

It is no wonder that commercial makers of these devices call them Magic Halos. They indeed “magically” keep non-native House Sparrows away from seed and suet while allowing native seed eating birds in.  The House Sparrows will fly toward the feeders but shy away at the last minute, ending up sitting forlornly beneath the feeding station: 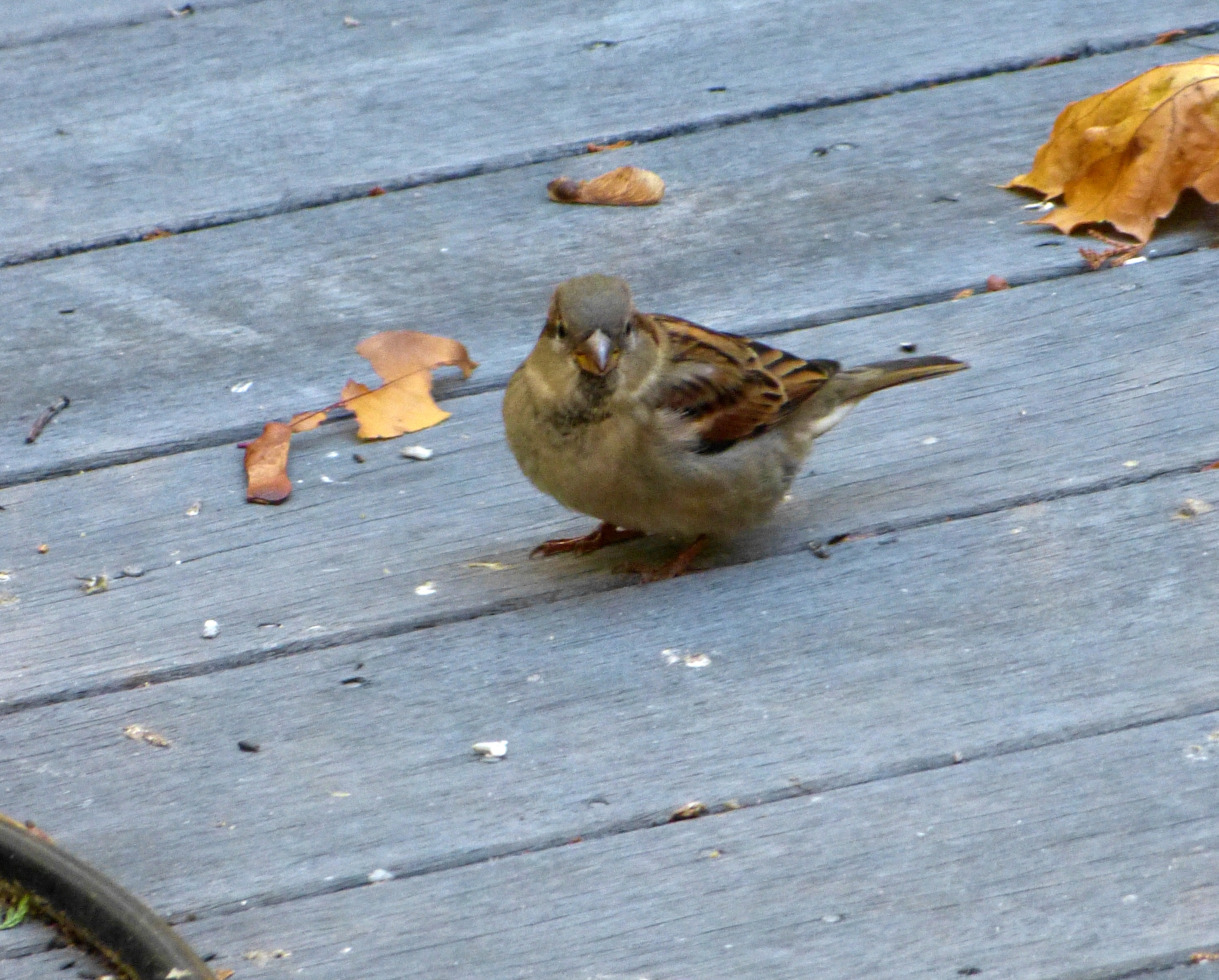 In the four months that I had this device in place I saw no more than two or three House Sparrows get past it.  I have no idea how it works, nor have I read any satisfactory explanation.  Apparently these birds, members of a group called Old World Sparrows, have a aversion to dangling strings that our native species do not.

Regrettably, after saving me lots of money in bird seed and requiring only minor maintenance, my rig was destroyed by a marauding Red-tailed Hawk who “took it out” while trying to snatch a bird at the feeder.

Before I got to the task of trying to put my halo back together I ran into a new feeder dilemma. For the first time in memory I attracted a Northern Mockingbird to my feeders.  As “mockers”  were one of the least reported feeder birds in Massachusetts in this year’s Focus on Feeders (only 75 reports, versus over 700 for chickadees, juncos and cardinals) I was delighted to see this feisty and flashy bird.

This mockingbird has established ‘territory” over my feeders,  chasing every other bird that comes in or even gets close to the feeding station: 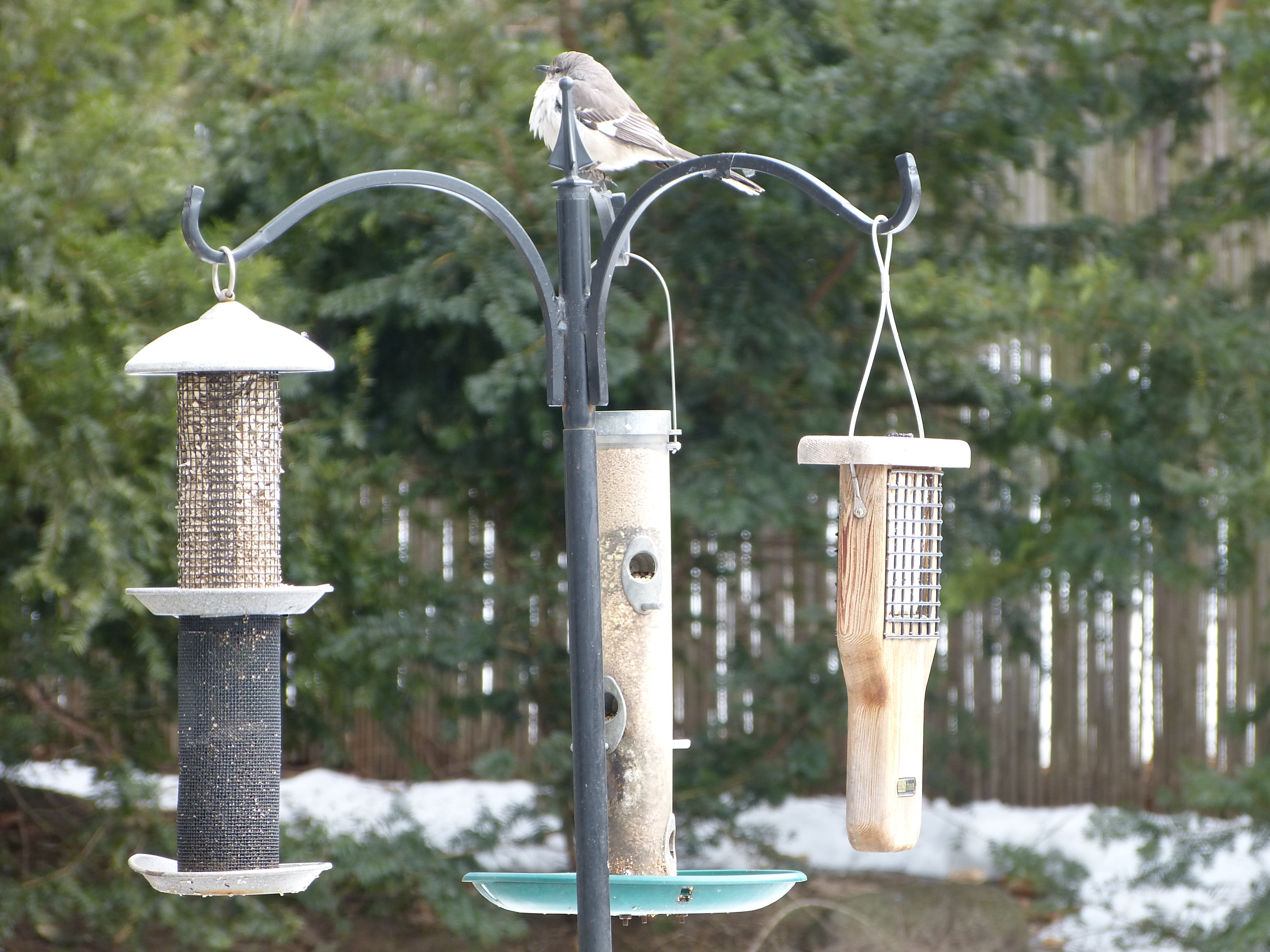 What started out as interesting has now became infuriating!  For the last month no bird has been able to come to the feeders longer than a few seconds before he swoops in and chases it.  I am saving a whole lot on feed. The mocker is the only one eating, and he doesn’t eat much.  Most of the time he just sits on or near the feeders looking like he is king of the rock. And he is: 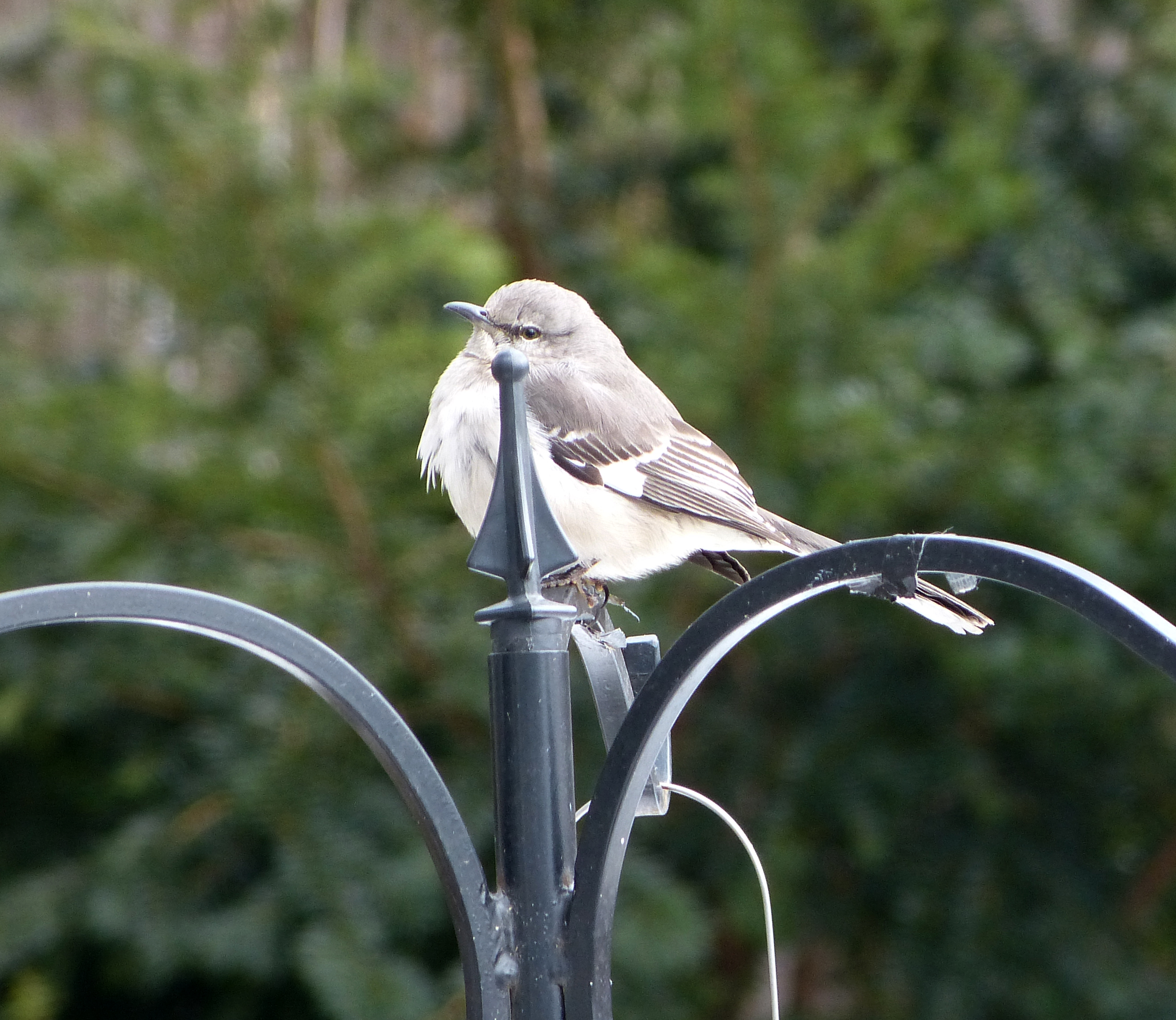 I tried taking the feeders down for a week. He was back within an hour of re-hanging them.  I put out a near life size photo of the neighborhood hawk. 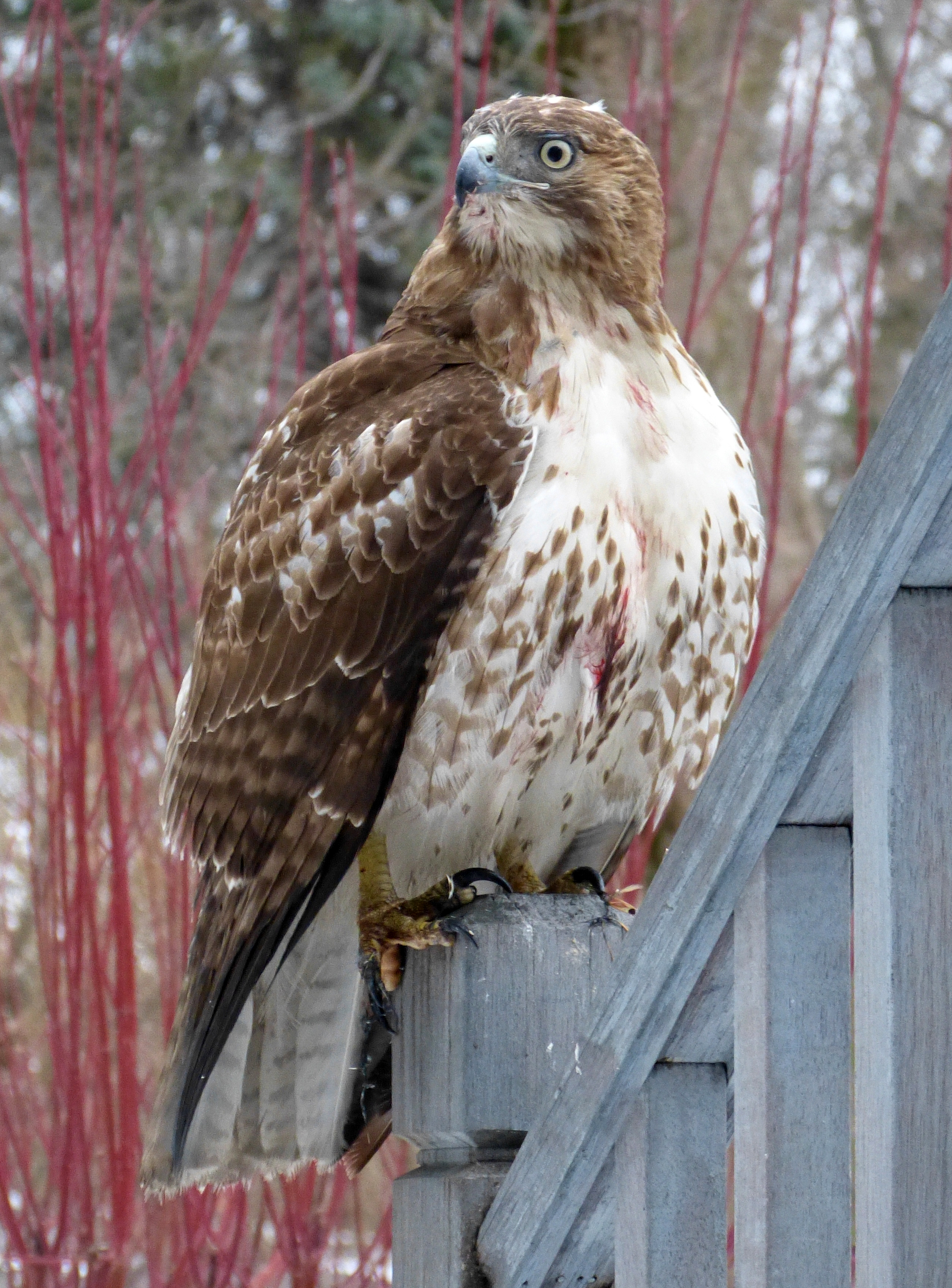 Immature Red-tailed Hawk after a catch and feed; note the tell-tale blood spots on the breast. Photo: Bob Mayer

He comes up and stares at it!  I guess I just have to wait out the season, unless of course the real red-tail decides to solve my problem.  Maybe I’ll try to put out a contract!