The feeders in my side yard in Jamaica Plain get pretty good action during the winter.  Over the years I have recorded 28 species drawn to the free lunch, including some less common ones like this Red-breasted Nuthatch: 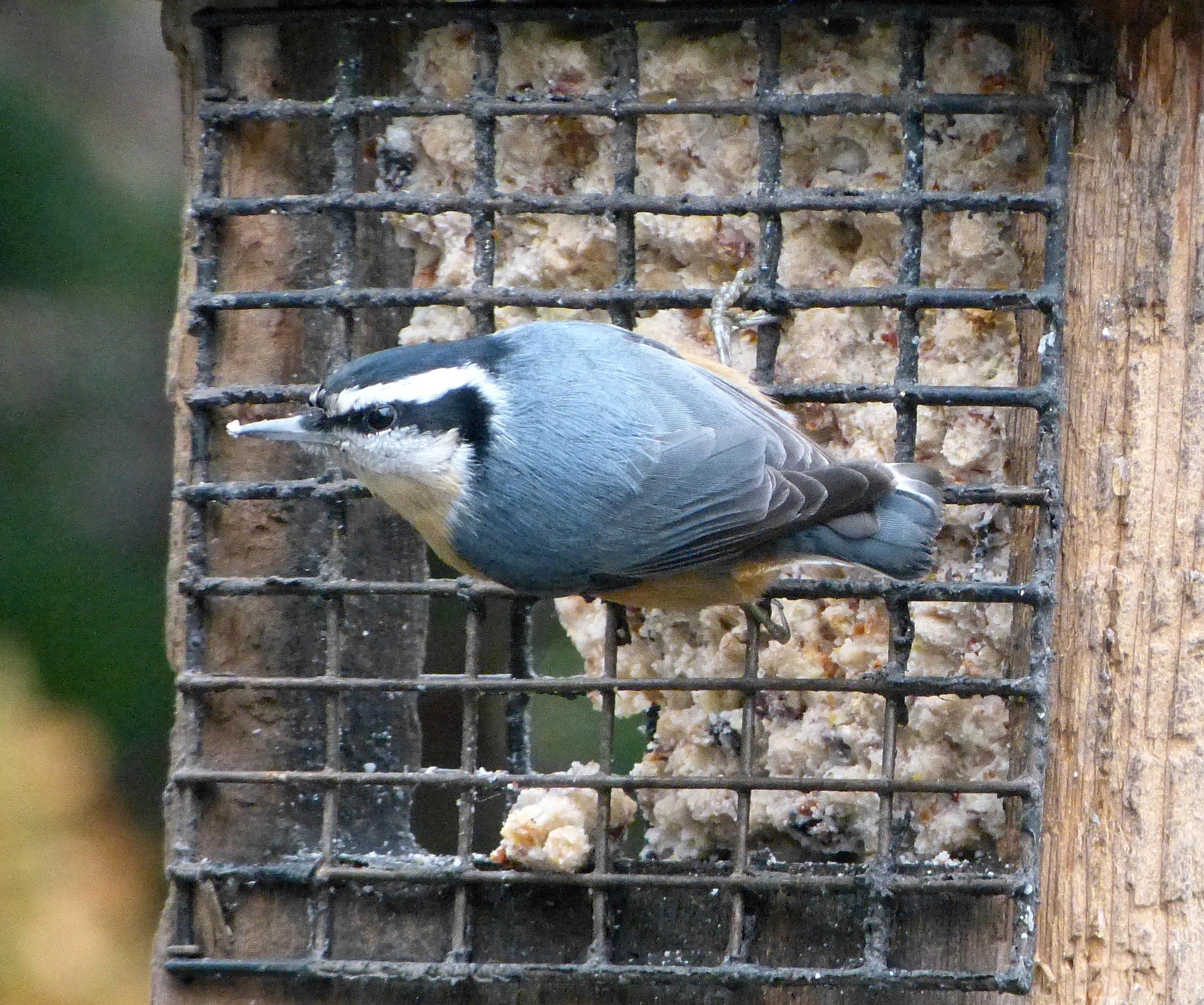 On February 8th, the day that Blizzard 2013 began, I was watching a flurry of activity at the feeders, a typical pre-storm surge.  I noticed a bird that had some yellow coloration; an American Goldfinch perhaps?  On closer inspection the bird was too big for a goldfinch, and the bill was too thin.  After further observation, and a check of my bird guides, I determined it was a Baltimore Oriole! 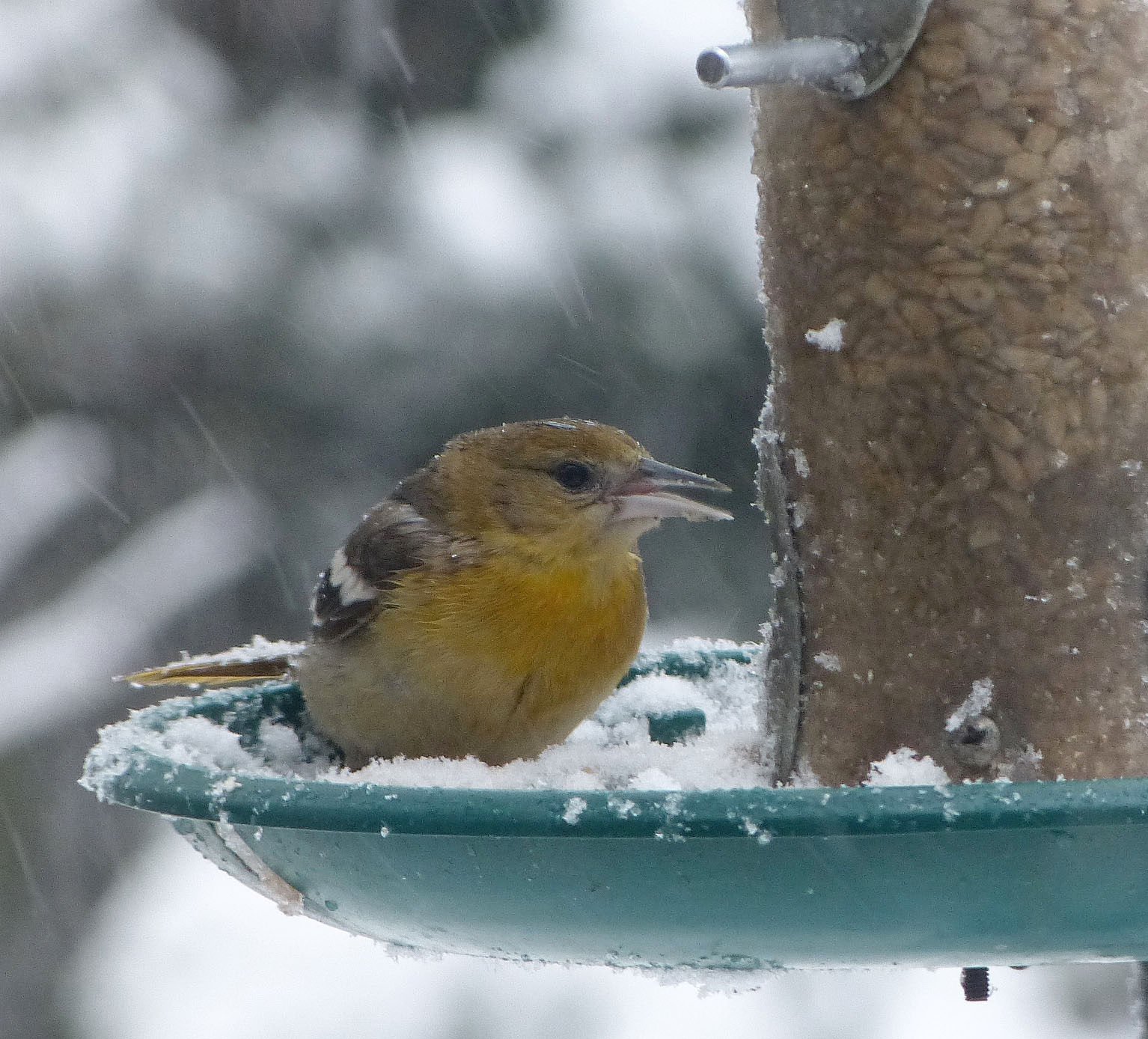 In early May, Baltimore Orioles begin to arrive from as far away as Central America to charm us with their rich, whistling song and bright colors.  Their hanging basket shaped nests are easily recognized in the Arnold Arboretum and elsewhere. 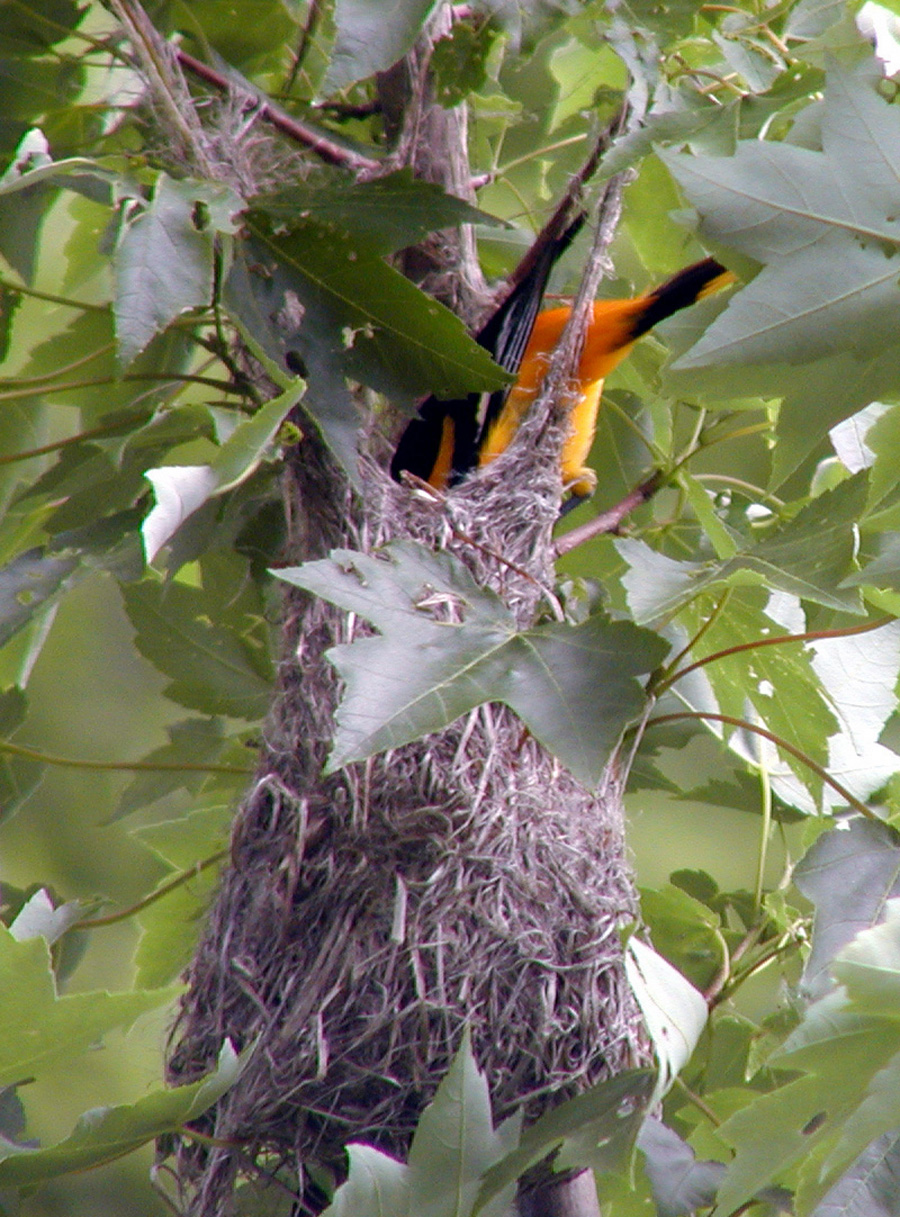 But in early fall both the adults and their new young head south.  That is they are supposed to head south.  The female bird at my feeder didn’t get it right.  She is one of four Baltimore Orioles that have been recorded since the beginning of the year in Massachusetts.  One was seen on Nantucket Island, another on Cape Cod. Oddly, the third one, a bright male, began coming to a feeder in Roslindale- only a few miles from my home- in December of 2012, and continued to return well into January.

“My” oriole continued to hold out as the wind and snow intensified and the competition for food increased: 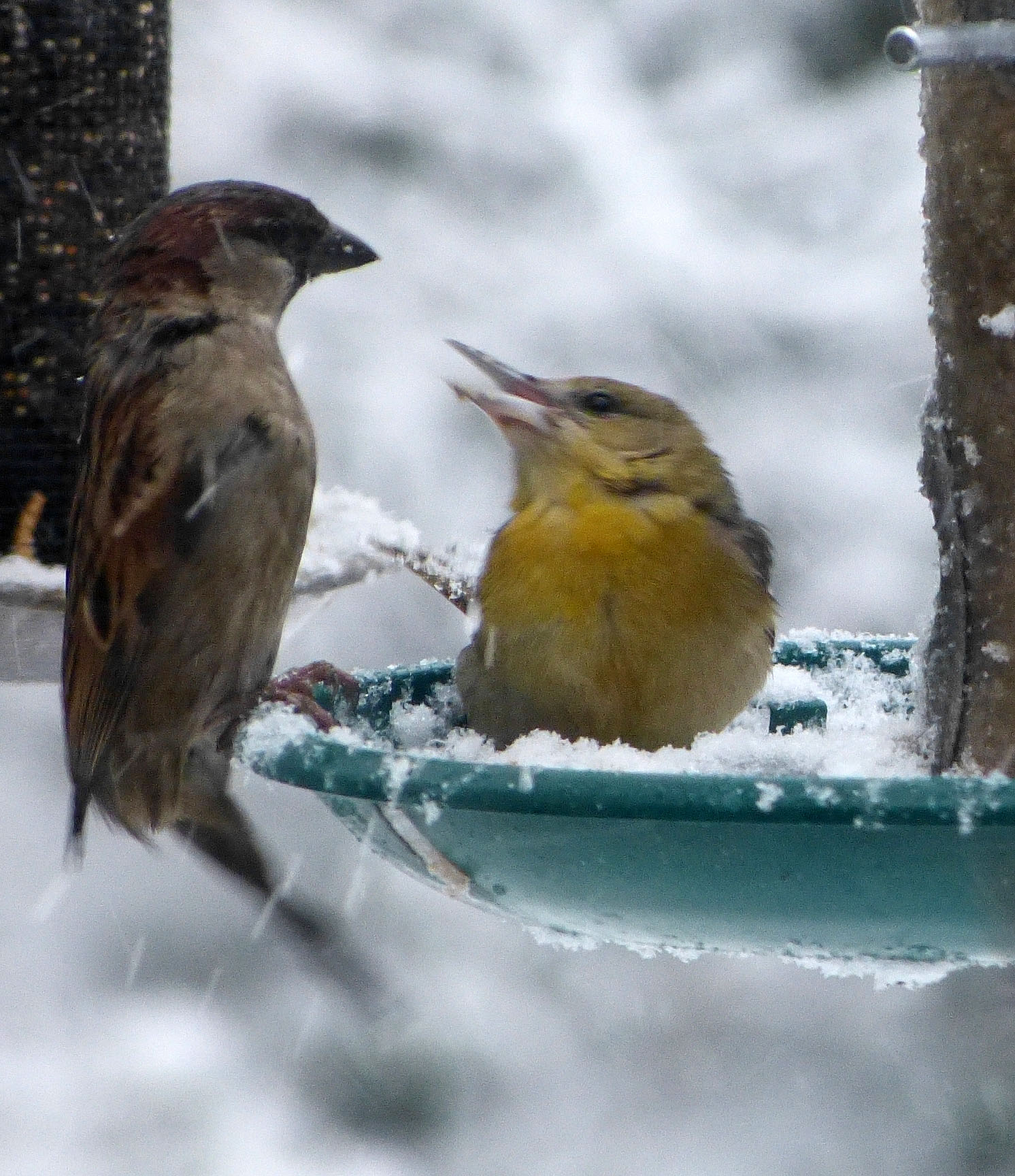 Female Baltimore Oriole at my feeder, defending her territory from an aggressive House Sparrow during the big storm. Photo: Bob Mayer

Given the severity of the blizzard, and the vulnerability of all birds in such weather I wondered if I would see the oriole again. The next morning as the storm began to wind down I looked out and there she was: 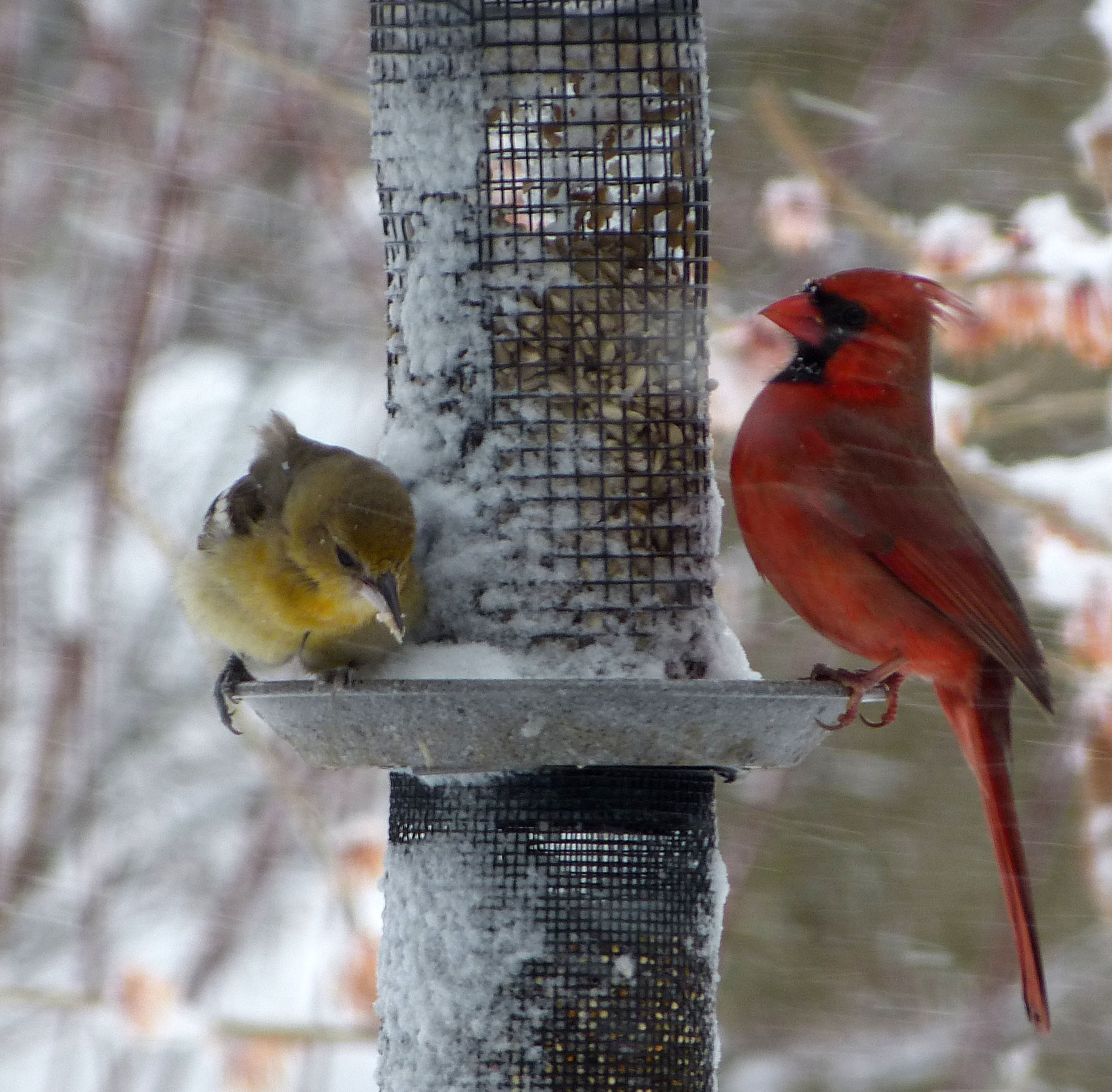 Out of place and time birds like this one attract a lot of attention.  People empathize with these stragglers and root for them against the weather.  In the process they are often seen as strong, adventurous and courageous.  Some have just fallen prey to heavy winds that blow them far off course. But many of these vagrants are immature birds and may be defective in some way.  Perhaps their GPS system is not up to par.

Will this bird make it until spring?  If so she could re-unite with others of her species, breed, and have another chance to get it right in next fall’s migration. The odds are not in her favor.  Avian mortality is quite high, even for those that are on track.  Fifty percent or more of some species perish one way or another, especially in the first year.

But each morning I check the feeders and am happy when I see her again: 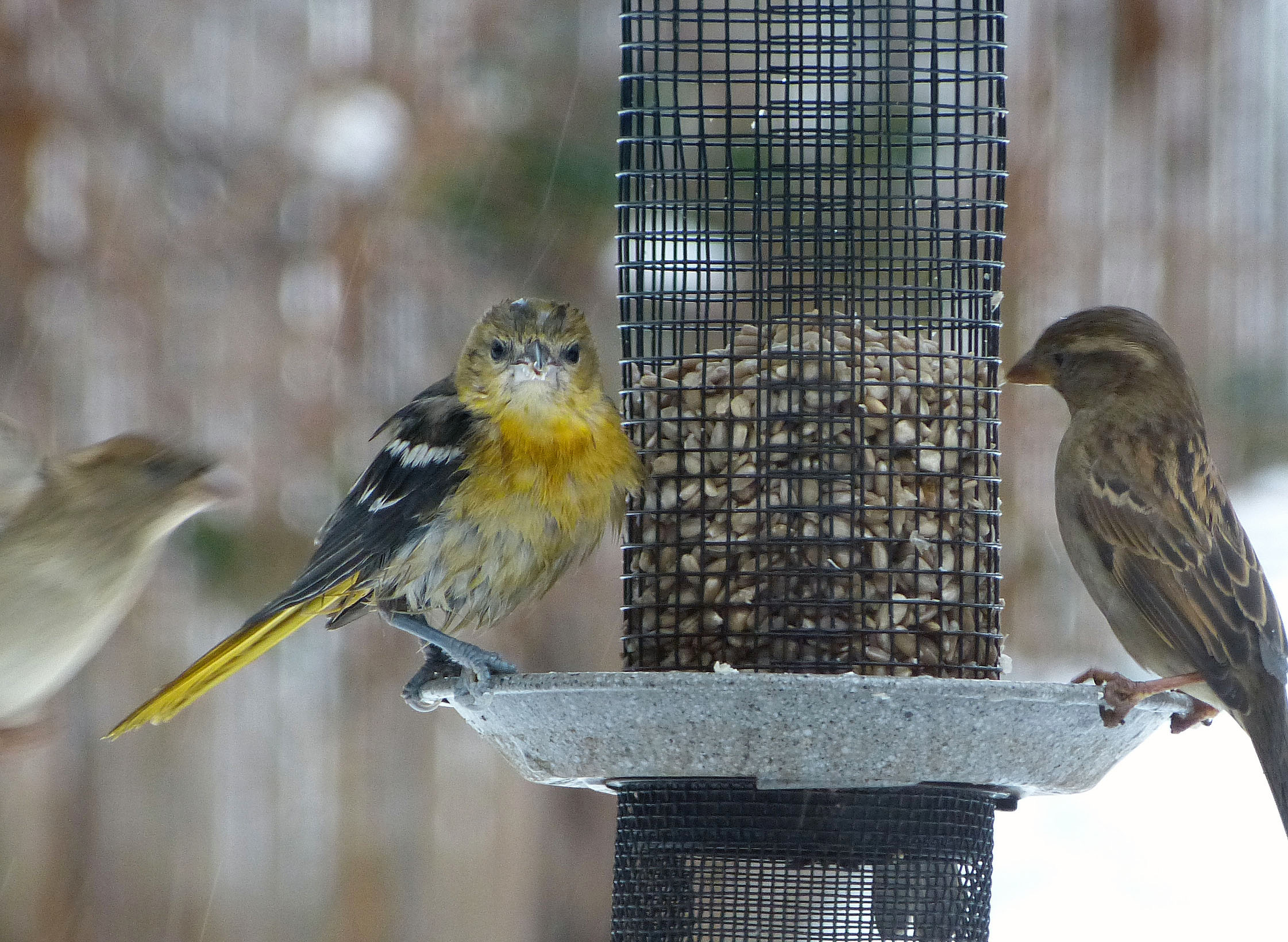 A drizzle has made the oriole especially bedraggled this afternoon. Photo: Bob Mayer

Many years ago while I was in Ethiopia with the Peace Corps I learned that in rural villages babies were not named until after they had survived the passage of a smallpox epidemic.  If I were of a mind to start naming my feeder birds she would be up for a christening by now.  But I’m not.  I don’t expect to see her in the Arboretum this summer, but she does look determined. 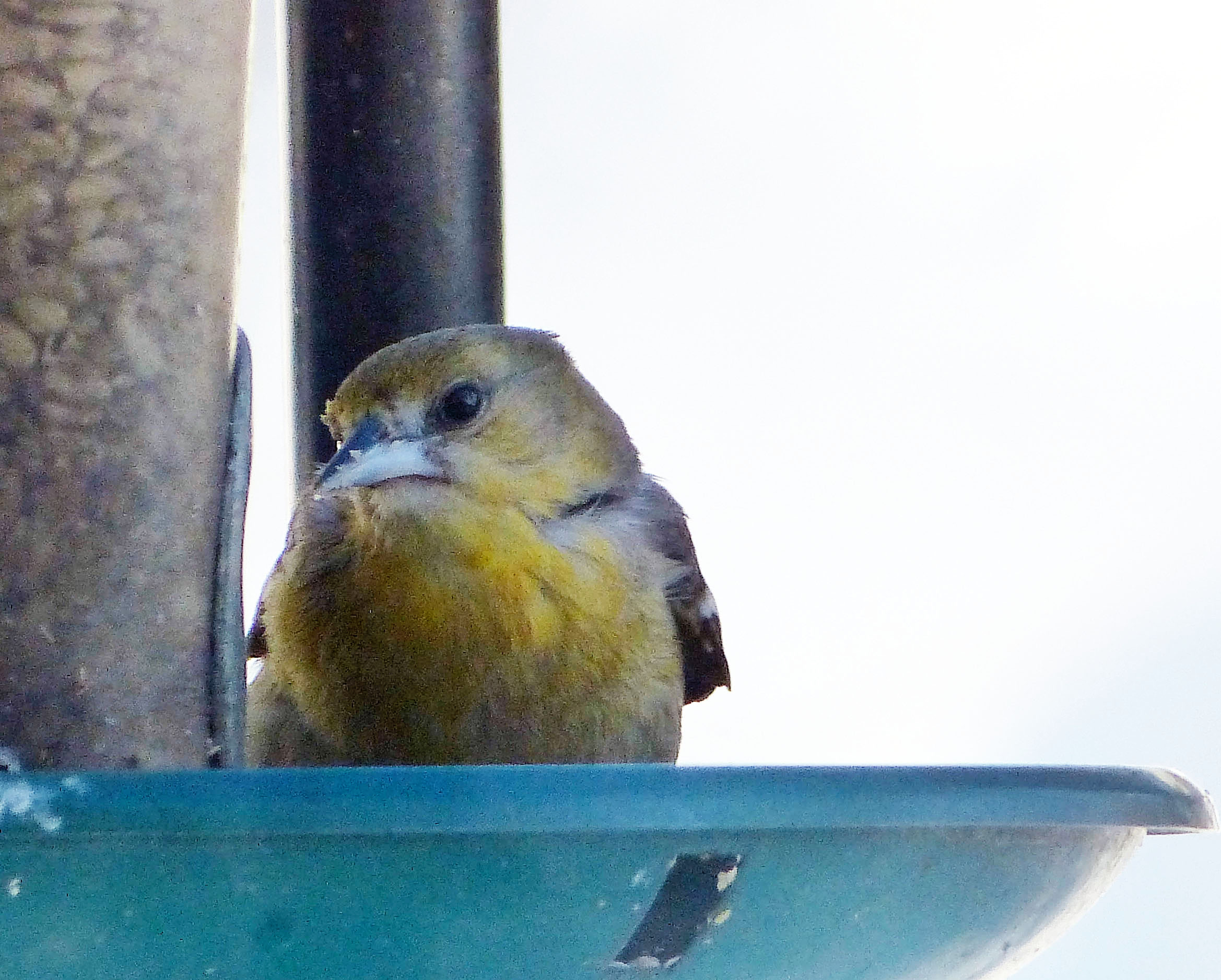 Keep watching those feeders- you never know what might show up!