Over 30 people appeared on Saturday in the overcast morning light, trying to discern color in warblers flitting high in he trees; it wasn’t easy. But the rain held off until the end and we had some nice birds including early migrants and nesters. We started off listening to a Chipping Sparrow as I spoke about the difficulty distinguishing it from the early migrant Pine Warbler; more on that later. Our first sight of an active nest was bizarre. I showed the group an obvious oriole nest, but orioles had just arrived in Boston a few days earlier so what could this complete nest be except last years holdover? What I had noticed on a scouting trip was another bird was using the nest for it’s own purpose, a chickadee! 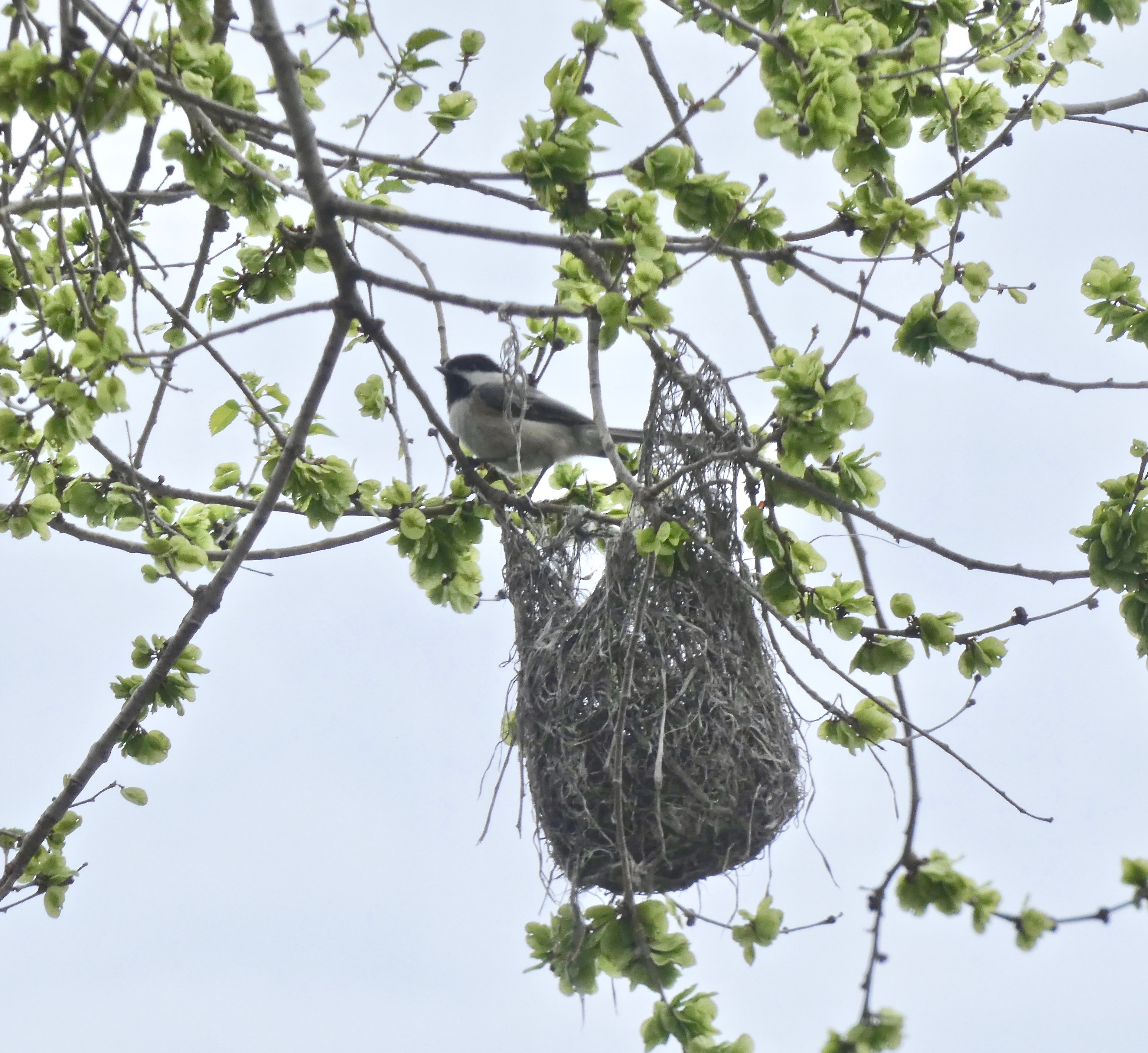 This Black-capped chickadee has taken over an old Baltimore Oriole nest for is own nesting site.

I had watched a pair of chickadees enter and leave the nest carrying moss to line their own nest. At the end of the walk we revisited this unusual sight and the whole group got to watch the chickadees in action.

Speaking of Orioles, they often arrive in Boston at the beginning of May and I had my first one on exactly that date. The group got to watch Baltimores of both sexes on the walk: 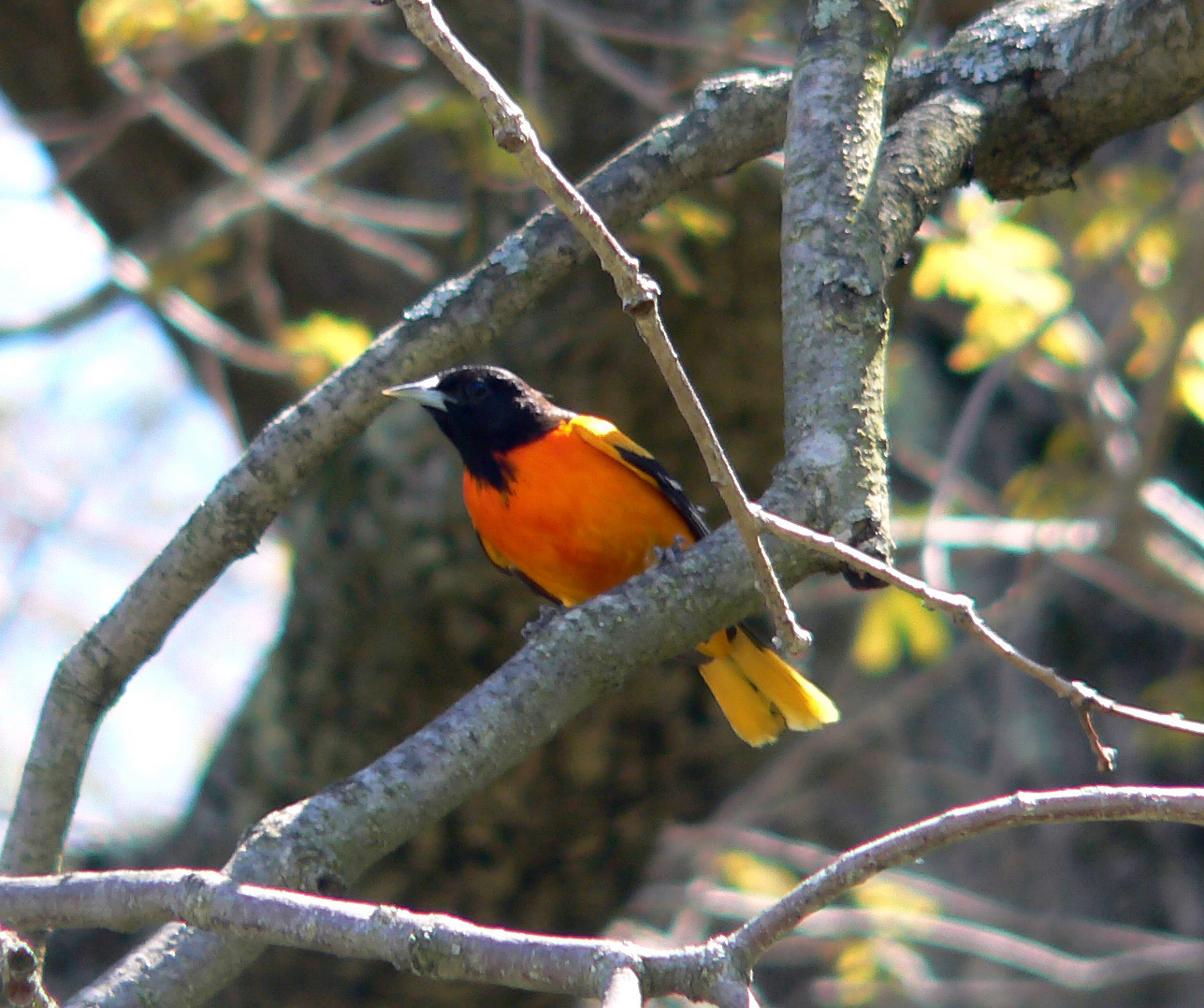 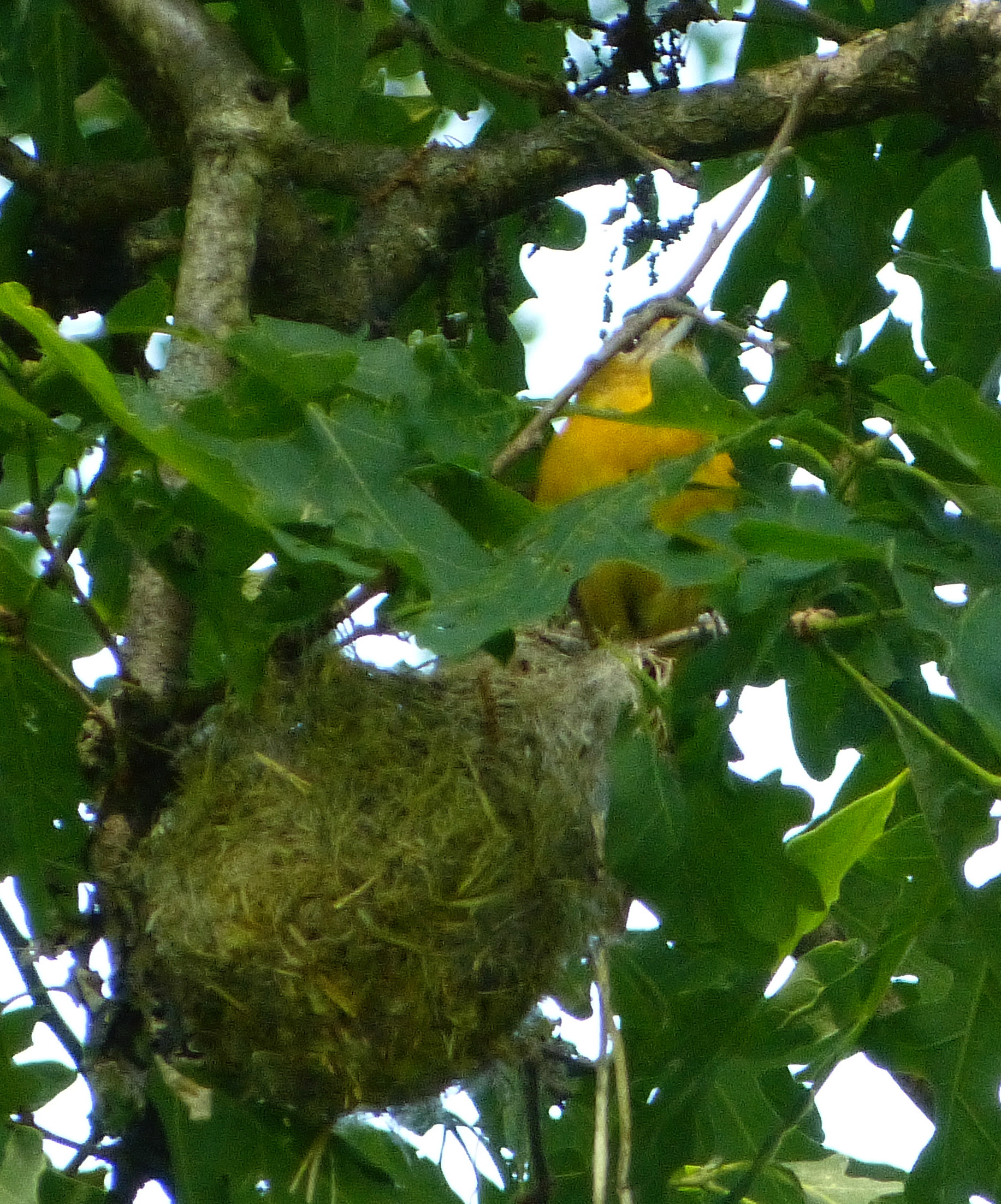 I had a birder new to my walks, and relatively new to birding, on the Saturday walk. His camera became critical to confirming one of the few warblers we saw well enough to suspect an identity which was confirmed by his images: 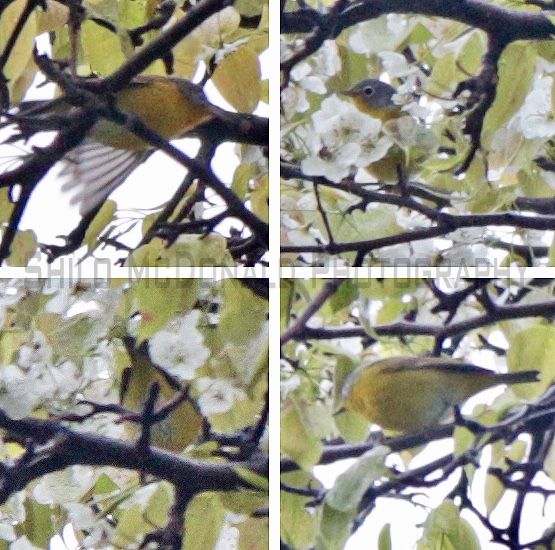 This photomontage created by Shilo McDonald shows all the identification points for this Nashville Warbler- yellow below, no wing bars, gray head, and (missing for all of us using binoculars) the distinct eye ring upper right. Thanks Shilo!

There were several birds high up in the just leafing out trees that were moving like warblers, but the light didn’t allow for seeing colors needed for positive ID.

We did have another early migrant in that area though, House Wren 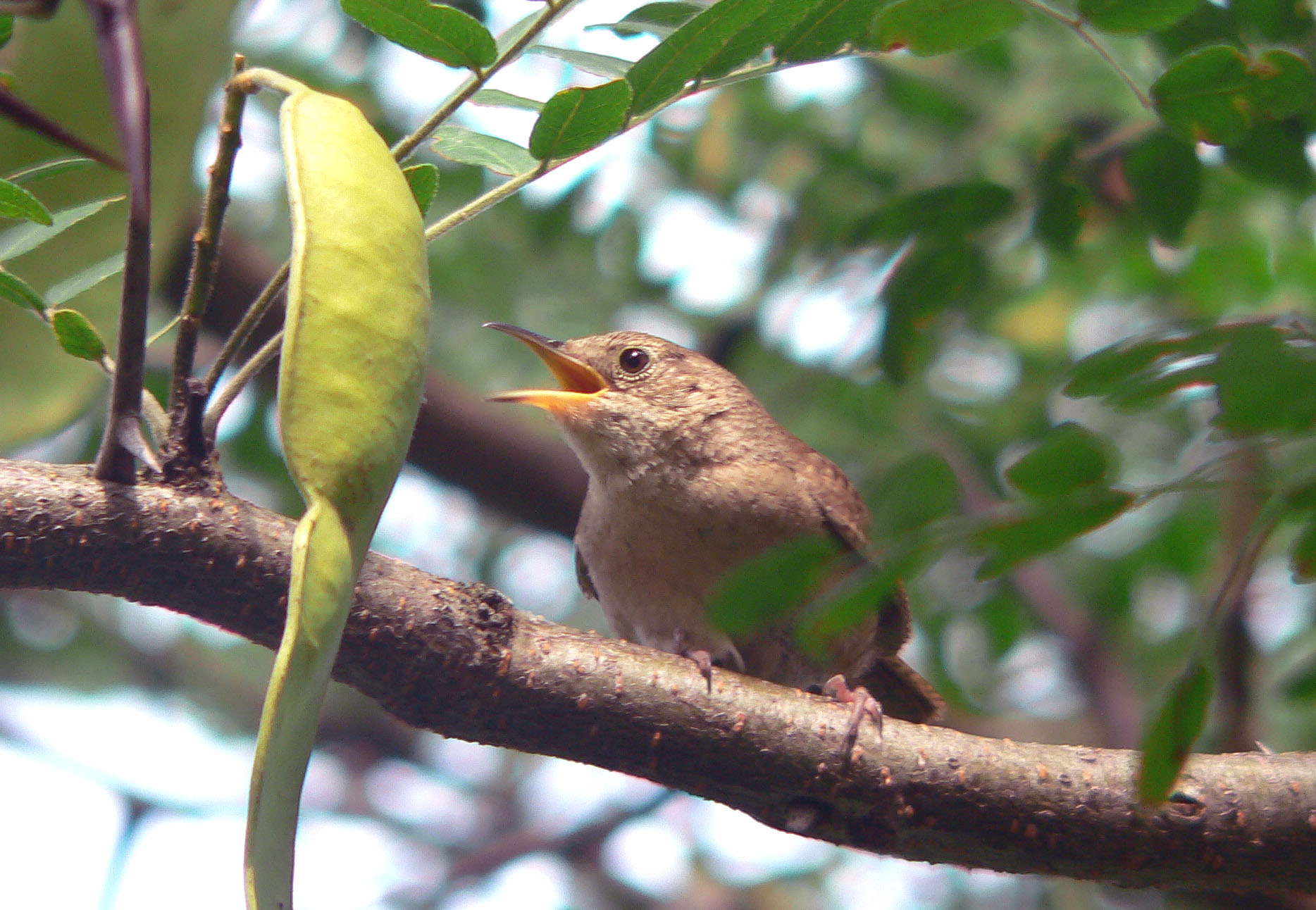 We first picked up the wren by call but then saw two of them.

There were also several sparrow species lower down: 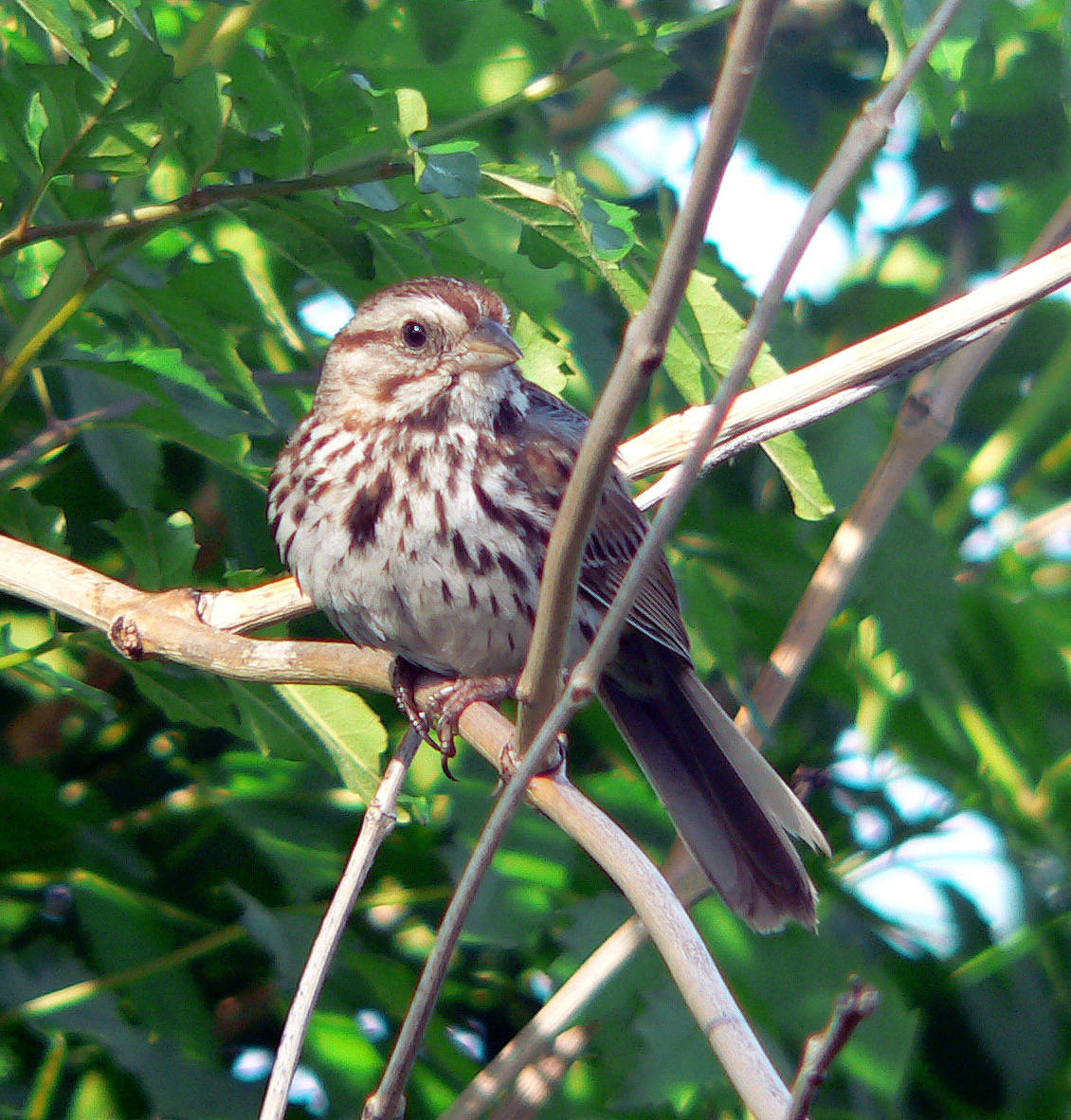 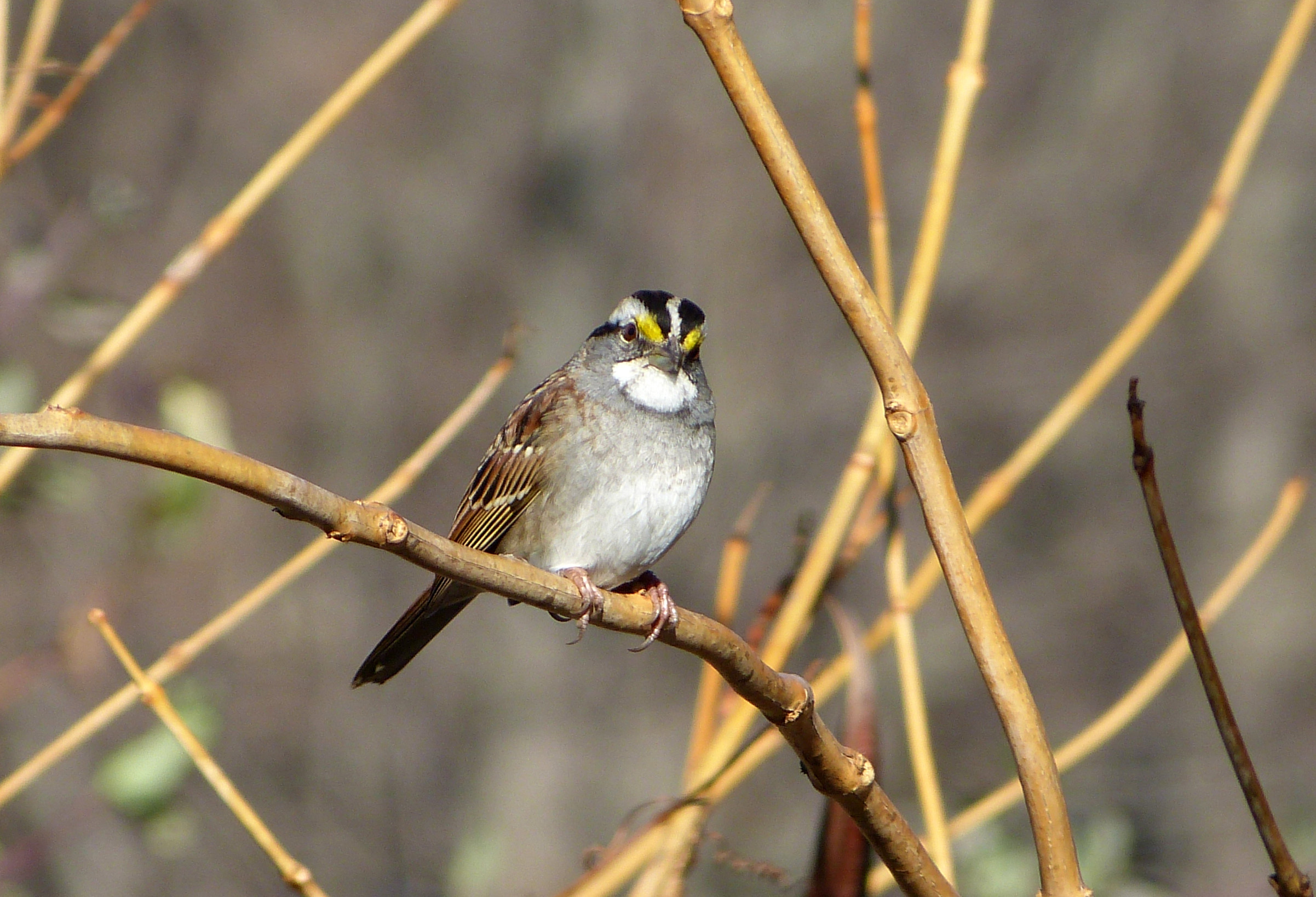 We also thought we heard a Field Sparrow but never saw it and weren’t certain enough of the few calls it made to take it for our list. 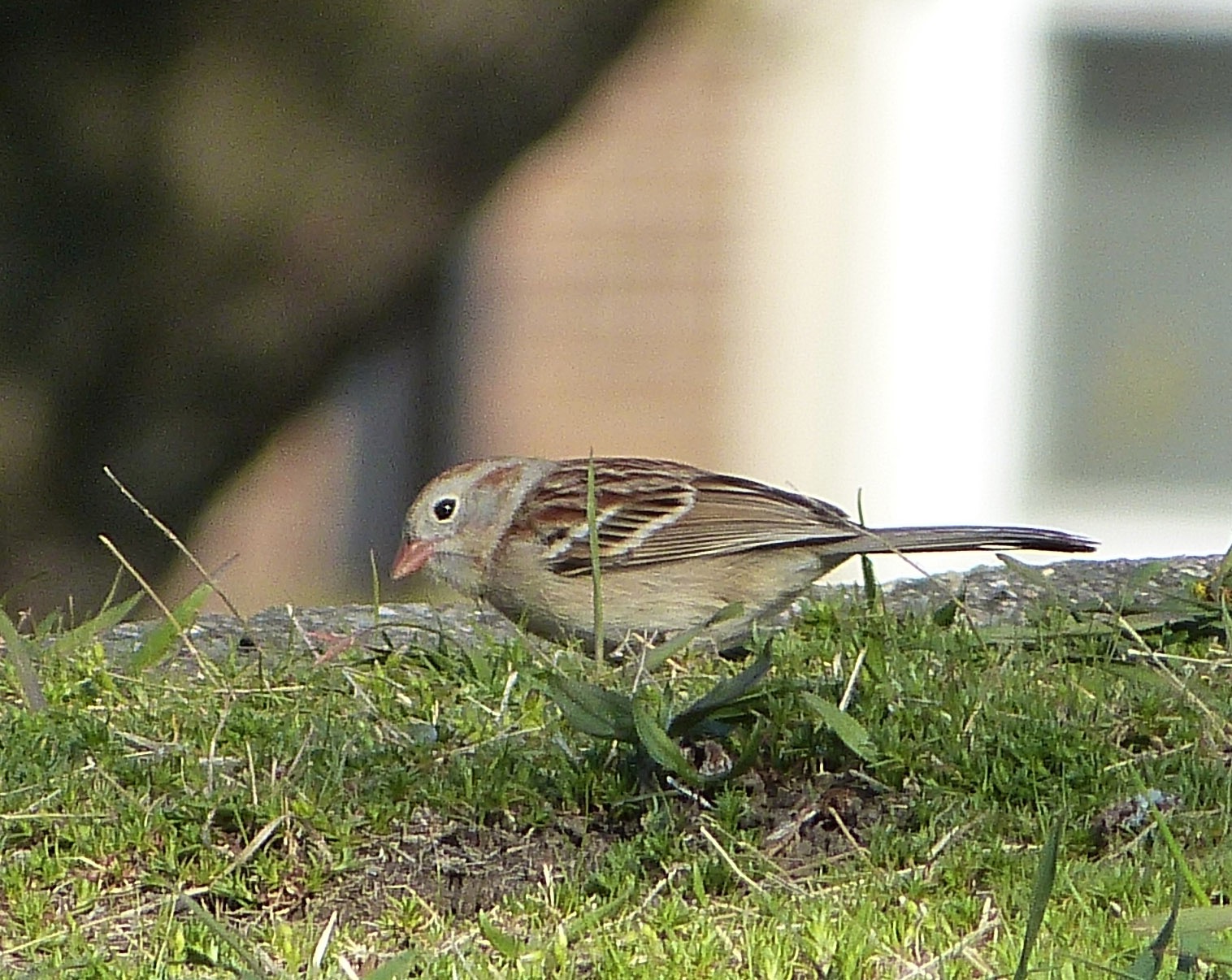 As we ascended the hill we checked the many nest boxes that my colleague Brendan Keegan has erected on the slope. Tree Swallows were clearly occupying several of them 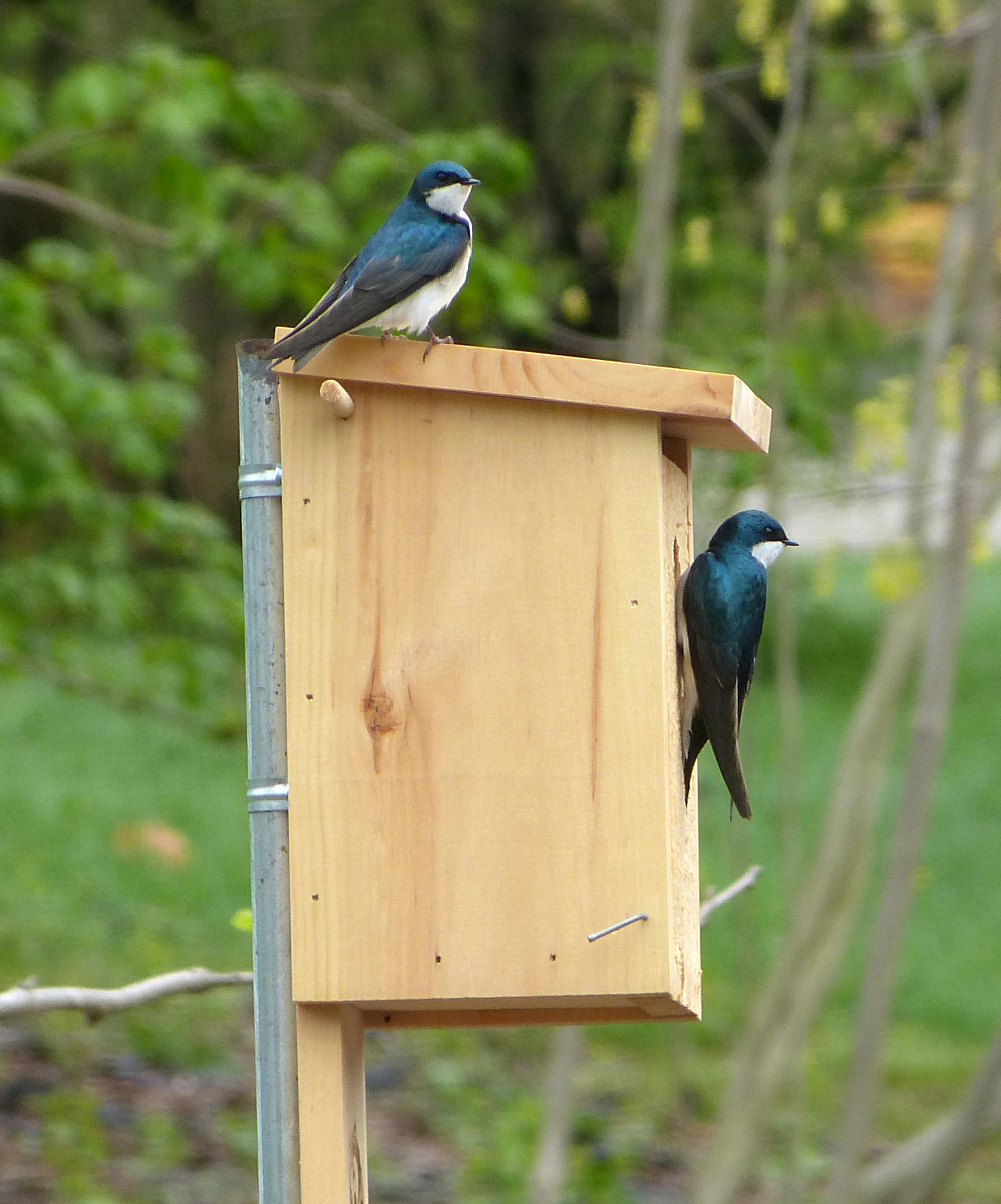 I had seen another “cavity nester” protecting one of the boxes earlier in the week and was disappointed when we got to that box and found nothing on it. As I told the group what I was hoping for a Tree Swallow landed on the box, and suddenly my bird appeared: 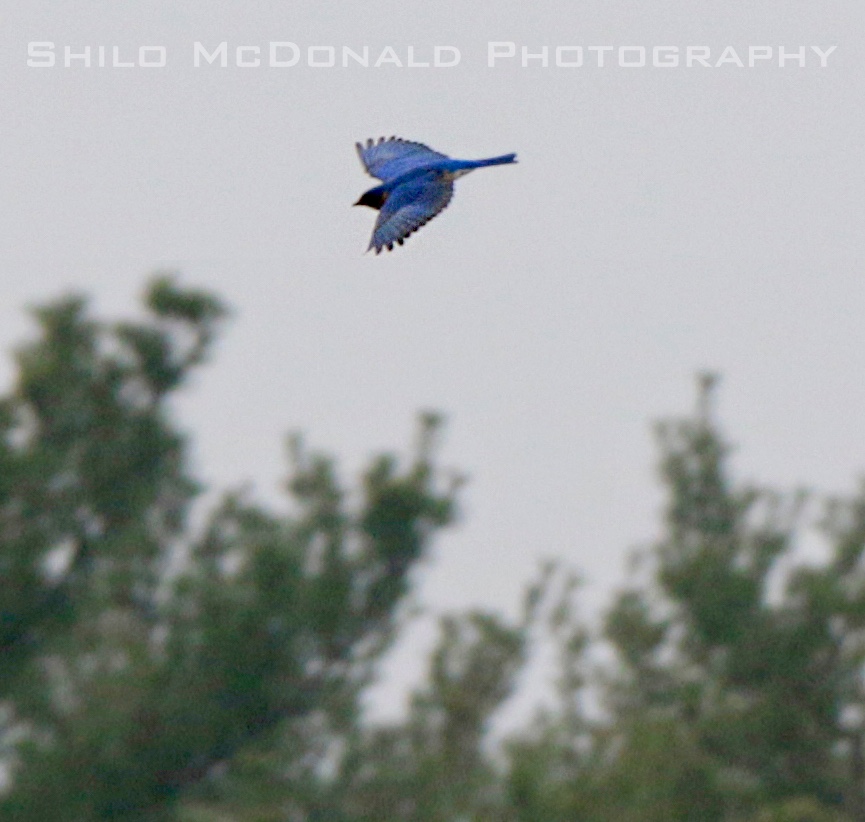 Here’s a closer look at them 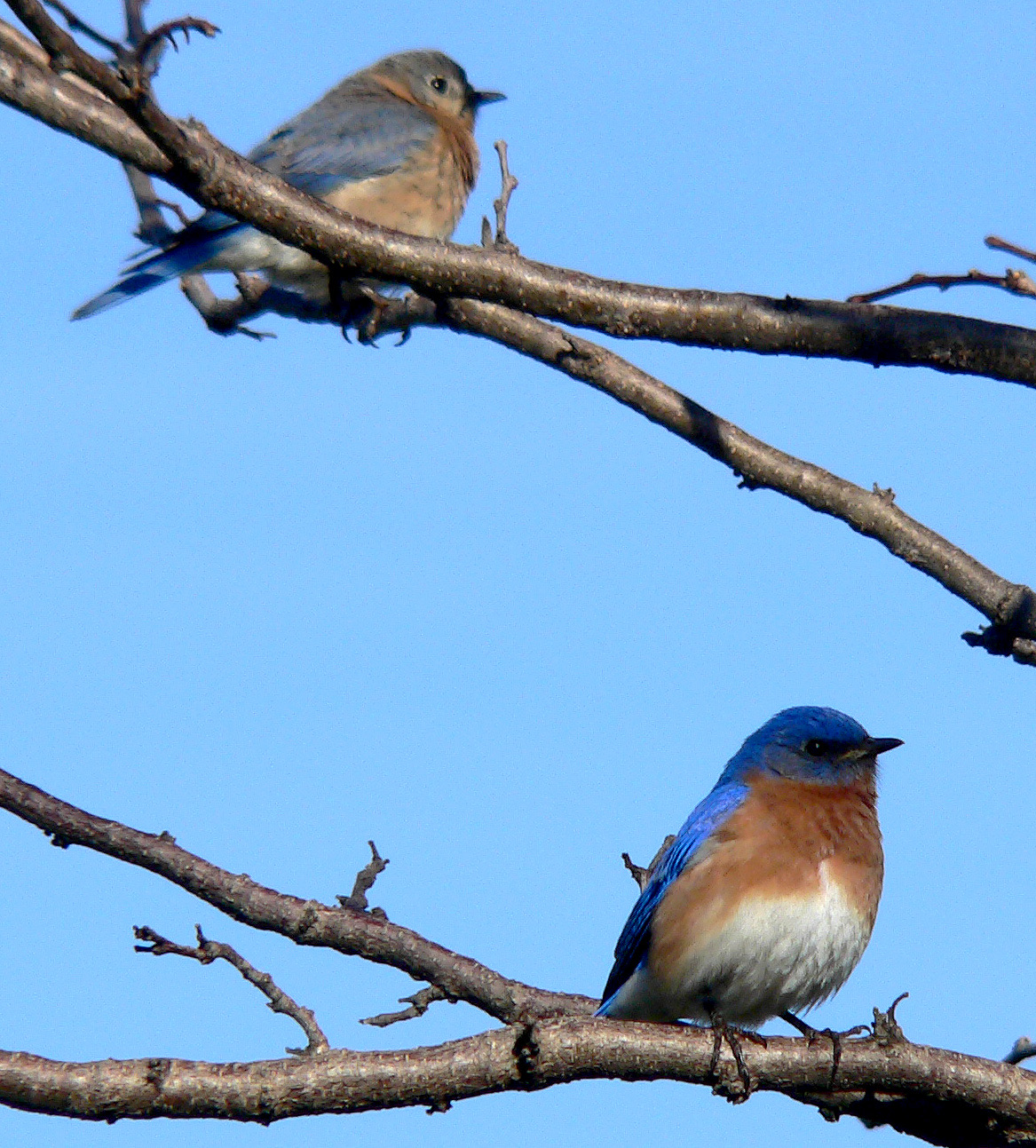 A pair of Eastern Bluebirds, male below

Back in the oughts when I first erected nest boxes in the Arboretum we had successful nesting of bluebirds for several years in a row but that ceased in 2009 when vandals broke open a box and destroyed the nest. Last year bluebirds tried again but were evicted by invasive House Sparrows. We’re hoping for a better outcome this year.

As we walked back to the Peters Hill Gate we picked up a few more species for the list. I thought I heard a Carolina Wren, but the call stopped. Then a cardinal. Then a Song Sparrow. One of the seasoned birders in the group solved the puzzle; mockingbird!

Northern Mockingbirds are famous mimics. Not only do they imitate other bird calls, they have been know to copy car alarms, door bells, and -near one clothing factory in the south- sewing machines.

We had run well over the announced time for the walk so I ended it at 10 AM, but a few diehards followed me across the street to Hemlock Hill where another early warbler has nested in past years. I played the call of the Pine Warbler and sure enough we got several responses and finally saw one. Here are the calls of the two birds I mentioned earlier on this post:

I have trouble telling the difference between these close calls. One distinction is that the Pine Warbler’s trill is short- one or to seconds- while the chipper goes on longer. Usually. So a longer call is almost always the sparrow, but a short one could be either. Others say the warbler call is slower, but ambient temperature can affect the speed for both. Someone in our small group felt the Chipping Sparrow sounded “tinny” while the Pine Warbler was more “resonant”. I liked that! Habitat can be helpful; chippers are more common in open areas while Pines are, true to their name, almost always in coniferous woods. In any case we finally had both for the walk! Here’s an image of a Pine warbler I got last week in another breeding area for this species at the AA, Bussey Hill: 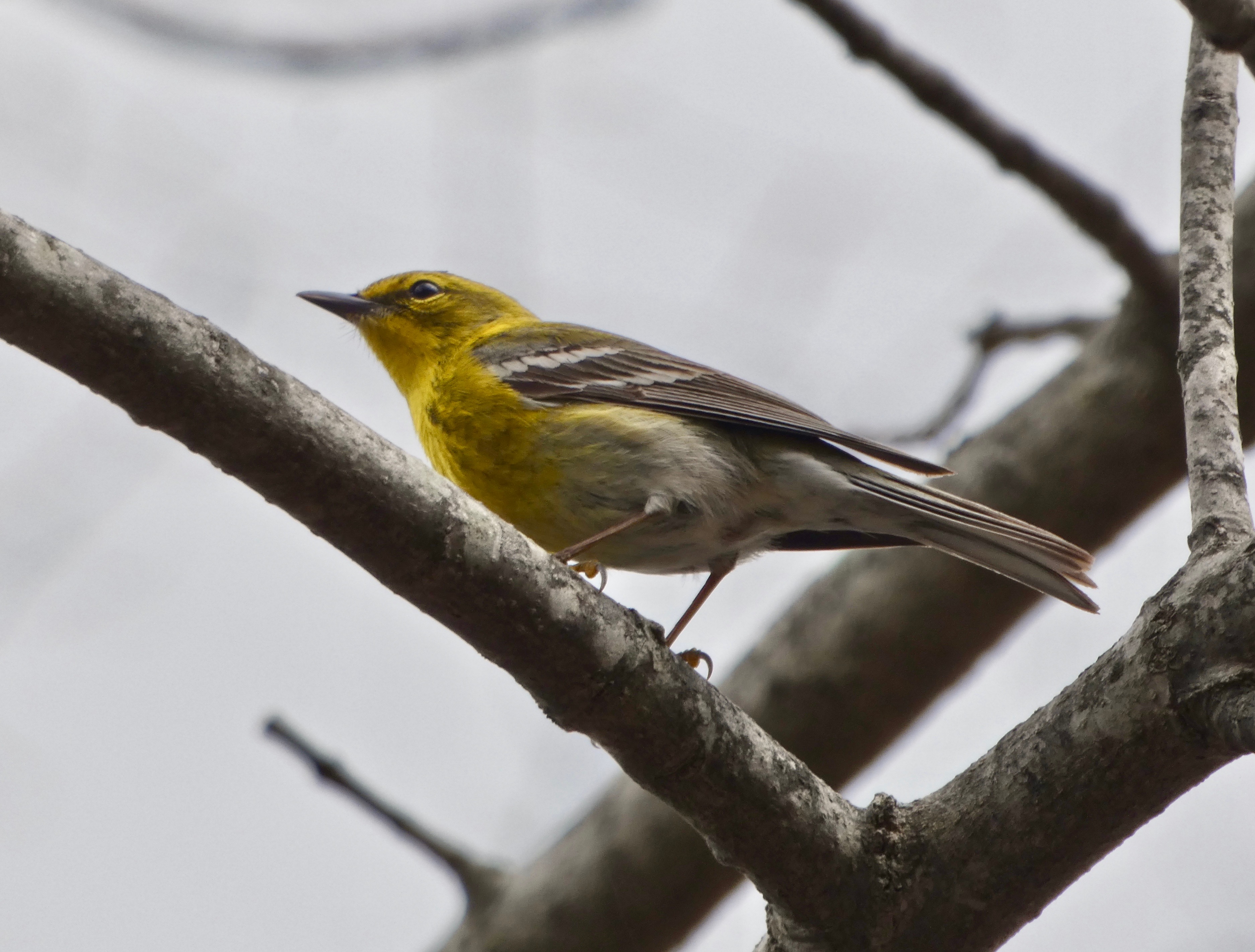 View this checklist online at https://ebird.org/checklist/S55770519

Next weekend I will be birding for Mass Audubon’s Boston Nature Center team in the annual Bird-a-thon fundraising event. If you would like to contribute to this worthy cause- making birds and all of nature available to urban kids- you can do so through this link to my webpage. Thank you!

The following weekend I will lead my last two spring walks in the Arboretum:

A 90-minute walk suitable for beginners as well as more experienced birders. See the arboretum website http://www.arboretum.harvard.edu for directions or to download a checklist of birds. Meeting location: Main Gate off the Arborway, park along Arborway 8:00 AM to 9:30 AM

The Arboretum Park Conservancy and the BBC are sponsoring this 90-minute walk in the Bussey Brook area of the Arboretum. The walk is suitable for beginning birders as well as those more experienced. Meeting location: South Street gate to the Arboretum, on South Street, where there is limited parking. Also accessible from Forest Hills T Station path from Washington Street 8:00 AM to 9:30 AM

Hope you can join me.