Olmsted’s original plan for the Emerald Necklace was to extend it from Franklin Park to the coast, probably near Castle Island and Pleasure Bay in South Boston. I went there today because a friend had posted on BostonBirds that he has seen some late fall shorebirds on the rocks along the causeway that separates Pleasure Bay from the Boston Harbor. It is always windy along the coast, but today was especially so; I had to hold onto my hat most of the time. I walked along the causeway toward “Mother’s Rest”, checking the rocks on both sides for these little guys that collect at high tide when the nearby exposed sandy beaches are covered. I first spotted three Ruddy Turnstones sunning themselves on the less windy ocean side:

Ruddy Turnstones. Note the straight gray-black bill and the reddish legs characteristic of these birds.

I ran into another birder coming from the opposite direction and we compared notes. She had seen some waterfowl but no shorebirds, so I told her where to look for the Turnstones. As I moved on I glanced at the rocks on the windier bay side and Bingo:

A large group, sometimes called a “flight” or “fling”, of Dunlin holding forth in the wind.

The birds kept moving about, making an exact count difficult, but I estimated over 100. I called out to my new birding colleague and she came back to admire the group. After a bit I proceeded along the path, seeing nothing but several “rafts” of Common Eiders bouncing in the ocean waves.

Part of a flotilla of aptly named Common Eiders. They are sexually dimorphic, the males being much more dramatically plumaged than the rust-brown females.

These salt water loving ducks can be seen year around in Boston Harbor, but are much more plentiful in the winter.

When I returned to the area where the Dunlins had been spotted the other birder had been studying the group and had noticed two other species admixed w the Dunlins. Can you spot them? 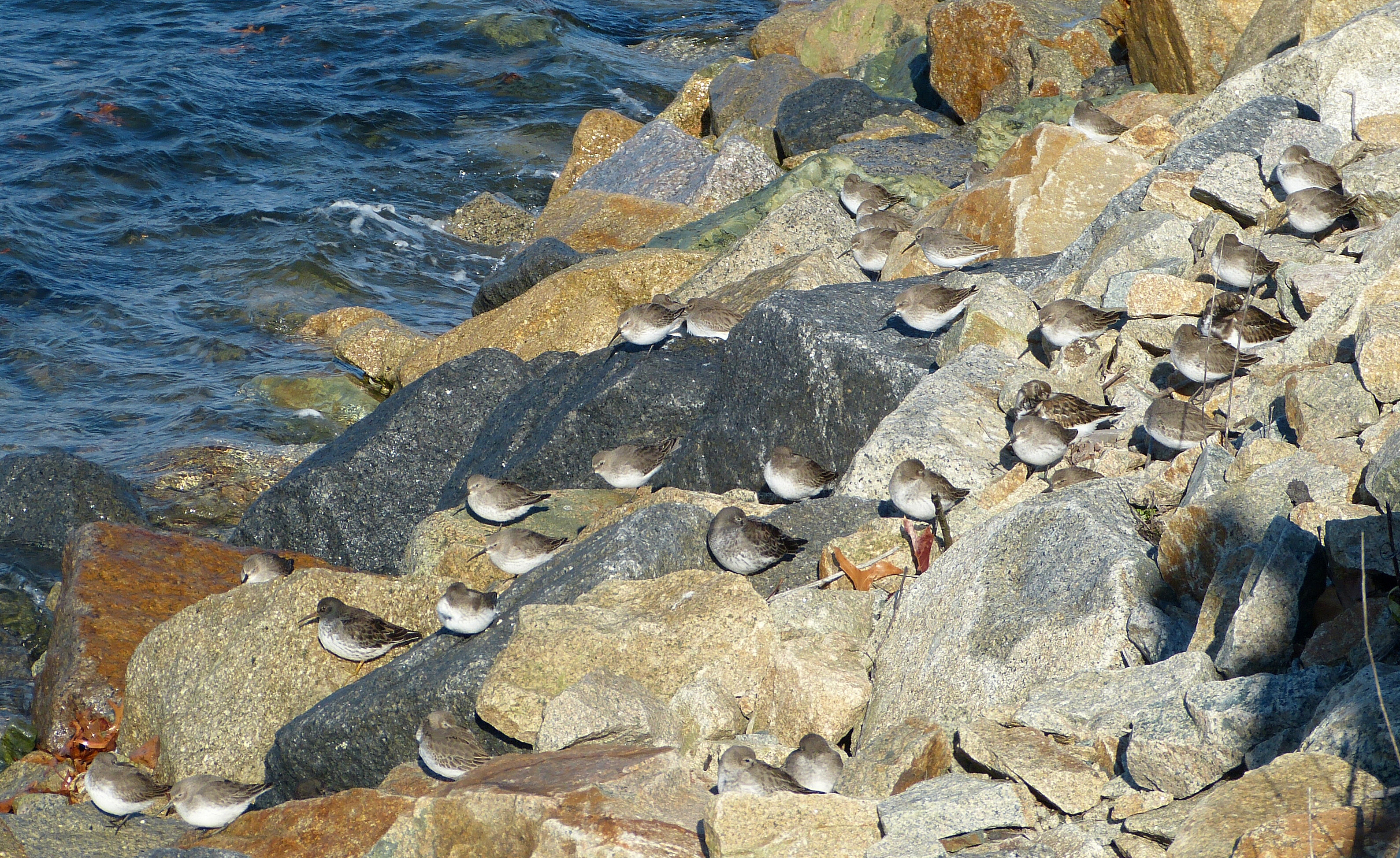 There are 30 Dunlins in the image, along with two Ruddy turnstones and two Purple Sandpipers.

Here is a closeup of a few Dunlins:

Dunlins. Note the thin decurved black bill (seen especially well in shadow), the black legs and the drab color with clear white belly. In breeding plumage these birds have a large black belly patch, and are more colorful overall.

And here is a close-up of the least common species present, Purple Sandpiper: 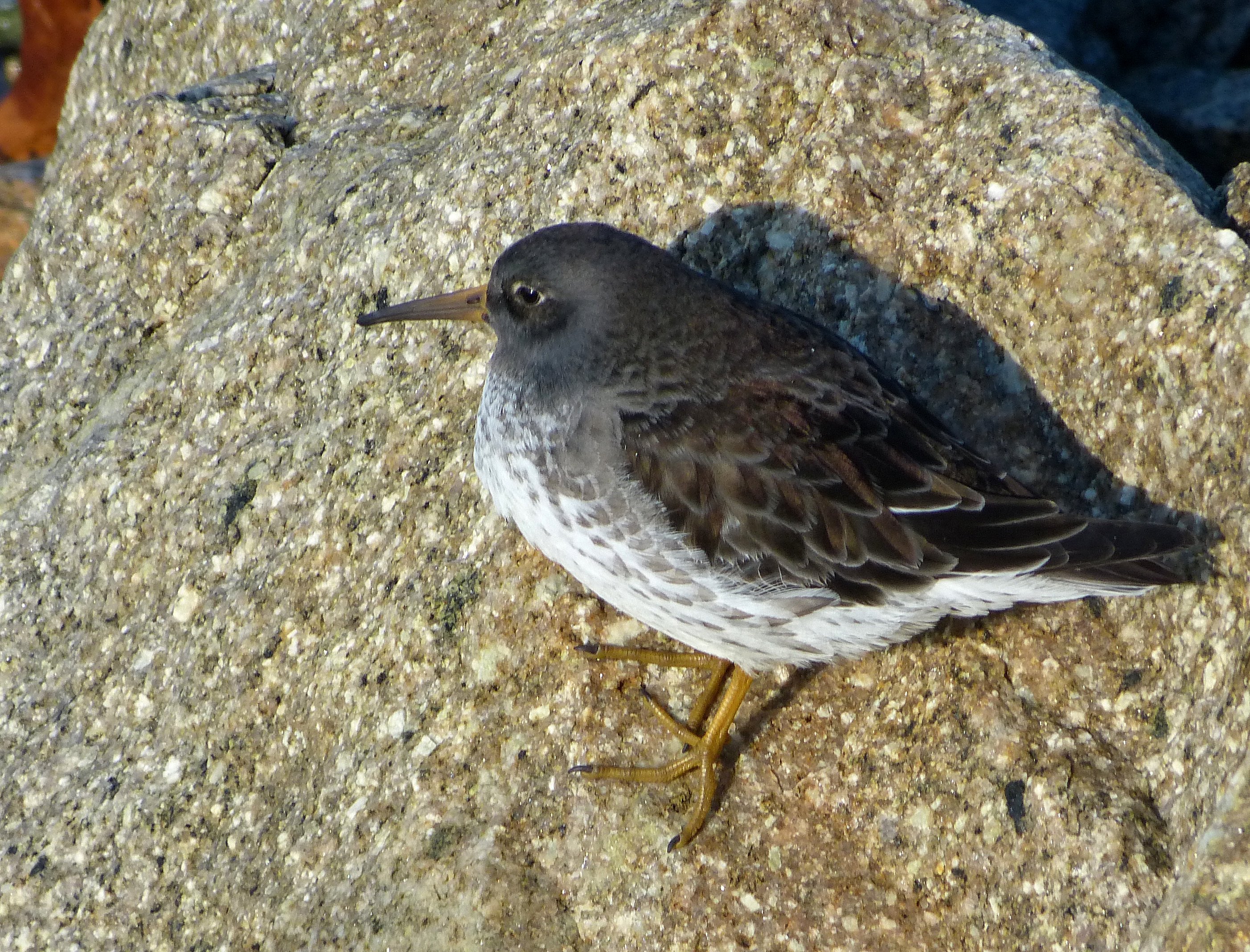 Purple Sandpiper. This shorebird also has a somewhat down-curved bill, black with a yellow/orange base, and notably yellow legs.

And here is an image of a Dunlin alongside of a Ruddy Turnstone: 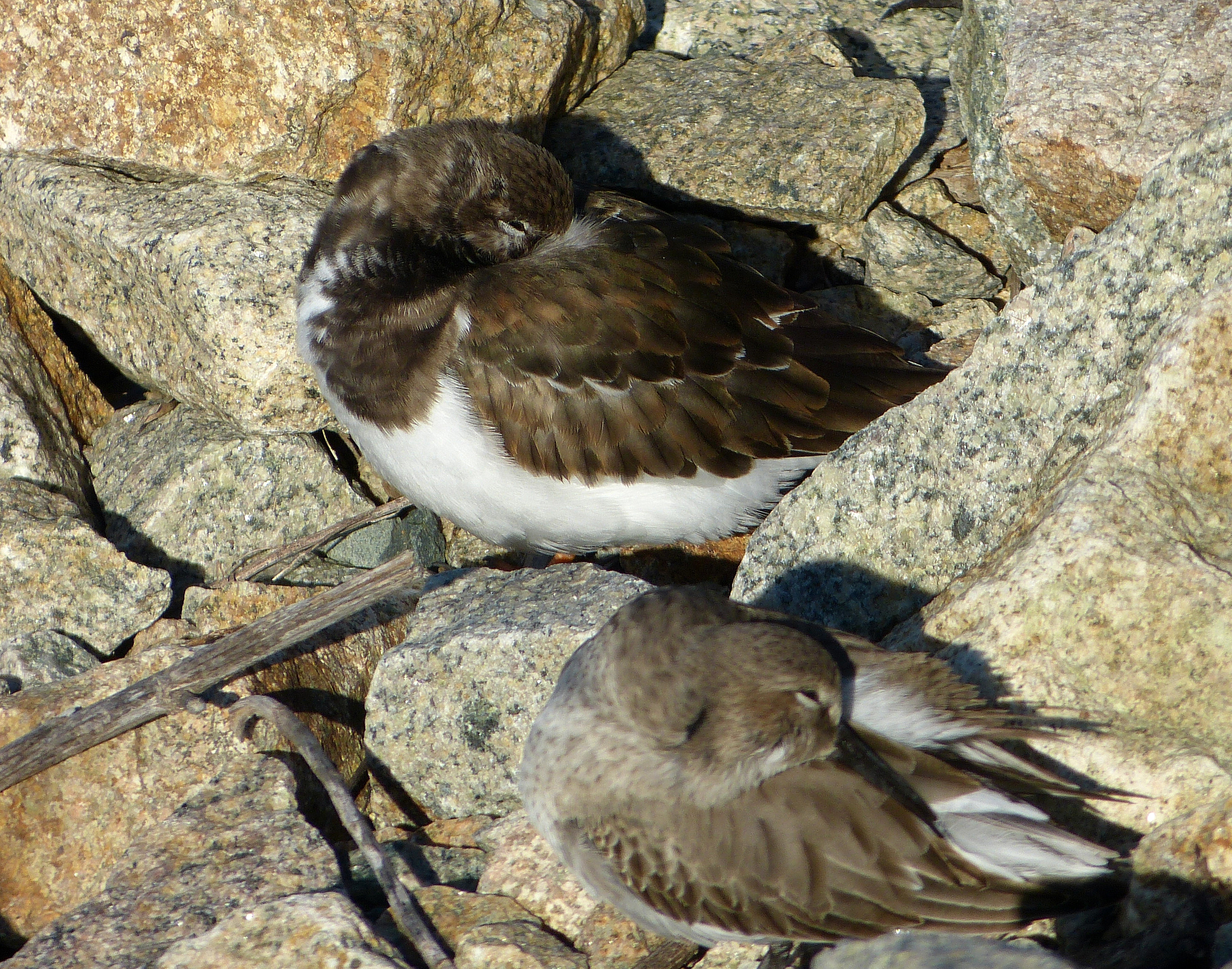 Note the difference in body color and, especially, leg and foot color, of these two species. The smaller, straighter bill of the Ruddy Turnstone is not visible in this resting bird.

All of these three species of shorebirds can be seen in the fall in Massachusetts. They are not displaying their breeding finery, as they all breed far north of us in Alaska, Northern Canada, Hudson Bay and even Greenland. The usual experience of seeing these birds is from a considerable distance as they forage along the sandy shore, or as flocks in flight:

At one point many of the Dunlins took flight, but were too close to capture other than in this blurry image.

Because it is hard to get photos of these shorebirds up close, I thought this little “clinic” on them and their identification was worth posting. Here is the answer to the quiz posted above:

Among the many Dunlins are two Purple Sandpipers, circled in red, and two Ruddy Turnstones, in green. Had you spotted them?

I have one more walk scheduled for 2016, Sunday December 11th. I’ll begin the new year in the Arboretum on Sunday January 8th. See the end of my last post for details and directions.