Unless you live in adjacent Roslindale, or are a dog walker, you may not be that familiar with Peters Hill, Hemlock Hill and the conifer section of the Arnold Arboretum. This morning I led a bird walk in that area and way too many people turned out! Of course I was delighted to see so many folks embrace my passion early on a Saturday morning. A group that large is tough to manage however, especially when you are trying to get everyone “on” a bird that is flitting about in the canopy. The warm and dry weather brought birders out, and while the turnout of migrant birds was not as strong at the turnout of birders, we had a great walk.

Early on we visited some nest boxes near the top of the hill. House Sparrows were harassing the Tree swallows, but some boxes had been claimed by the swallows: 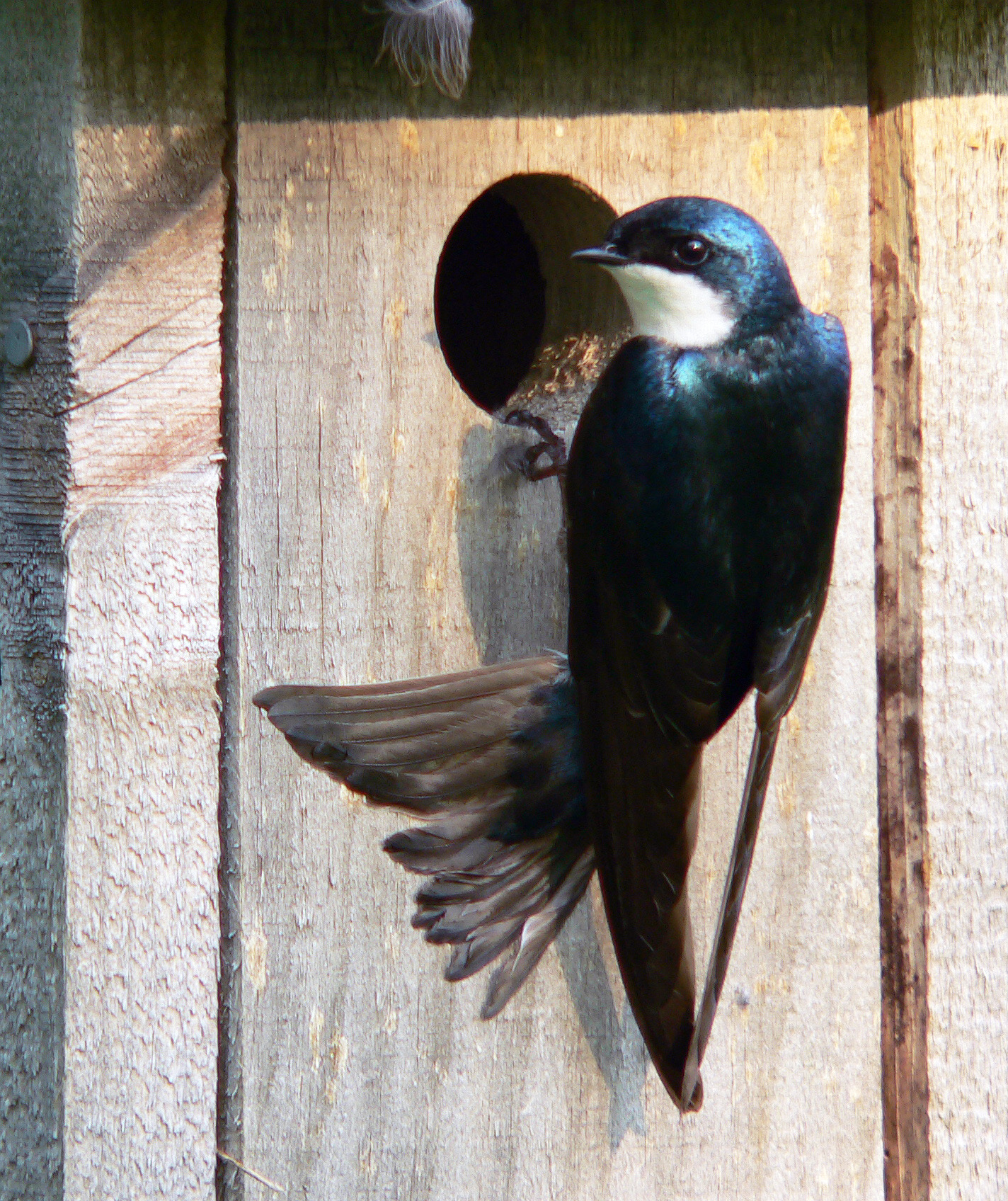 These nest boxes have had good success since being erected eight years ago. They have been mostly used by Tree Swallows but Eastern Bluebirds have nested there as well. Lately the invasive House Sparrows have sadly become more dominant.

As the walk proceeded down the hill we ran into a group of early migrants, including this pretty warbler: 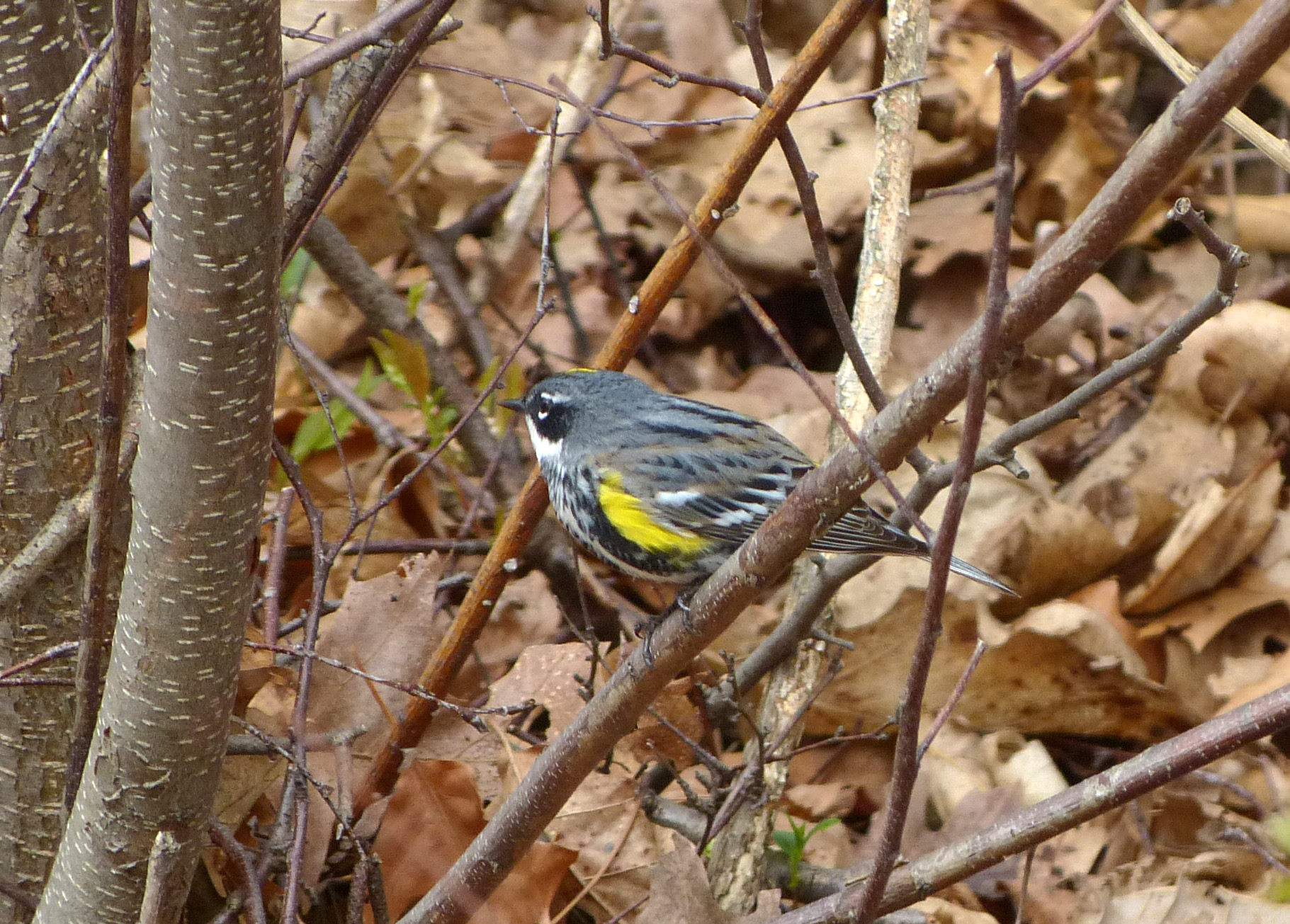 The yellow patch at the base of the tail for which this species is named isn’t visible in the photo. When this bird flew however, everyone saw why it is nicknamed “butter butt”.

Also in the group was a Black and White Warbler: 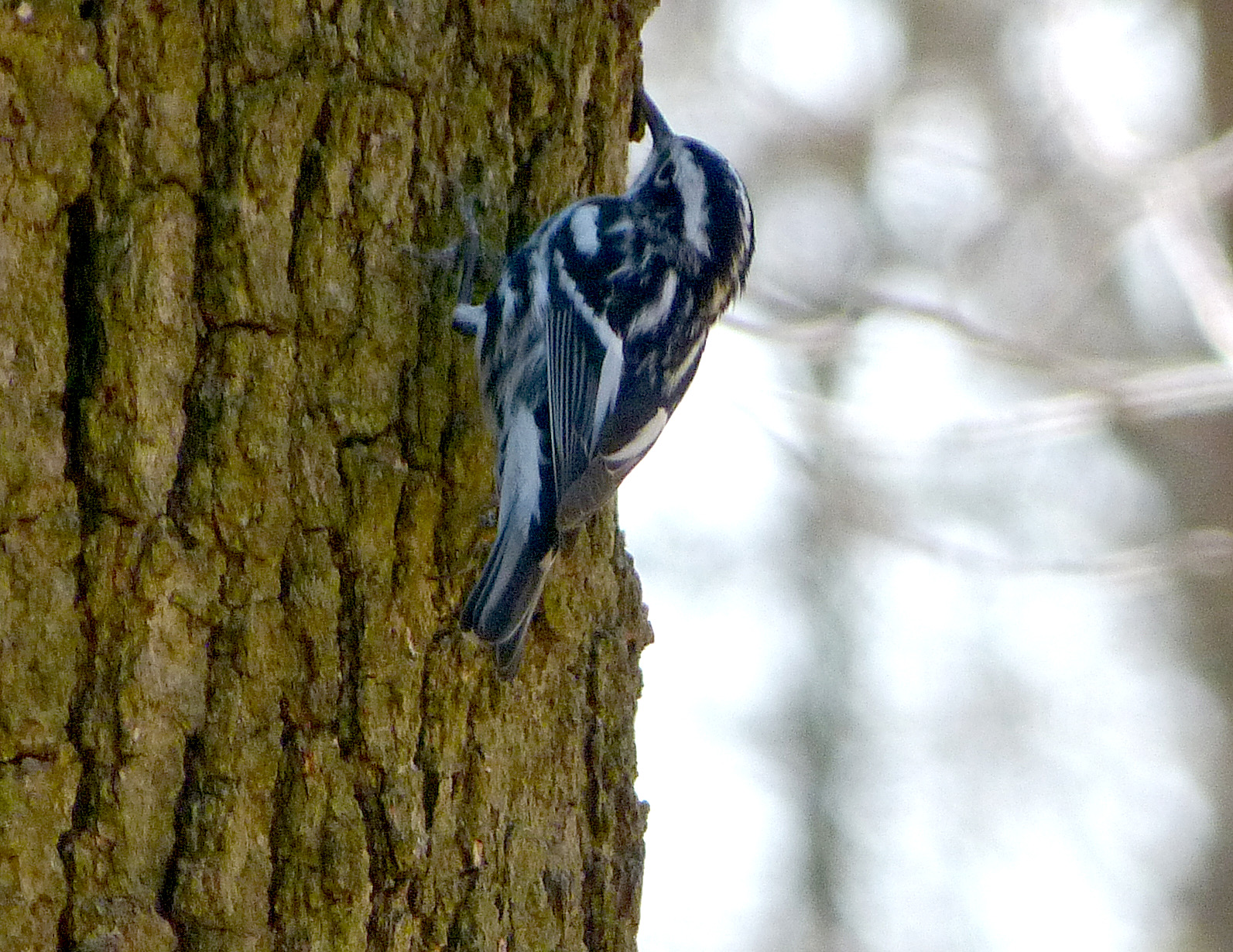 This species is almost always on the trunk or a large limb rather than out in the canopy where most warblers are seen.

As we left Peters Hill we saw two Northern Flickers chasing each other. It is always a nice woodpecker to observe. 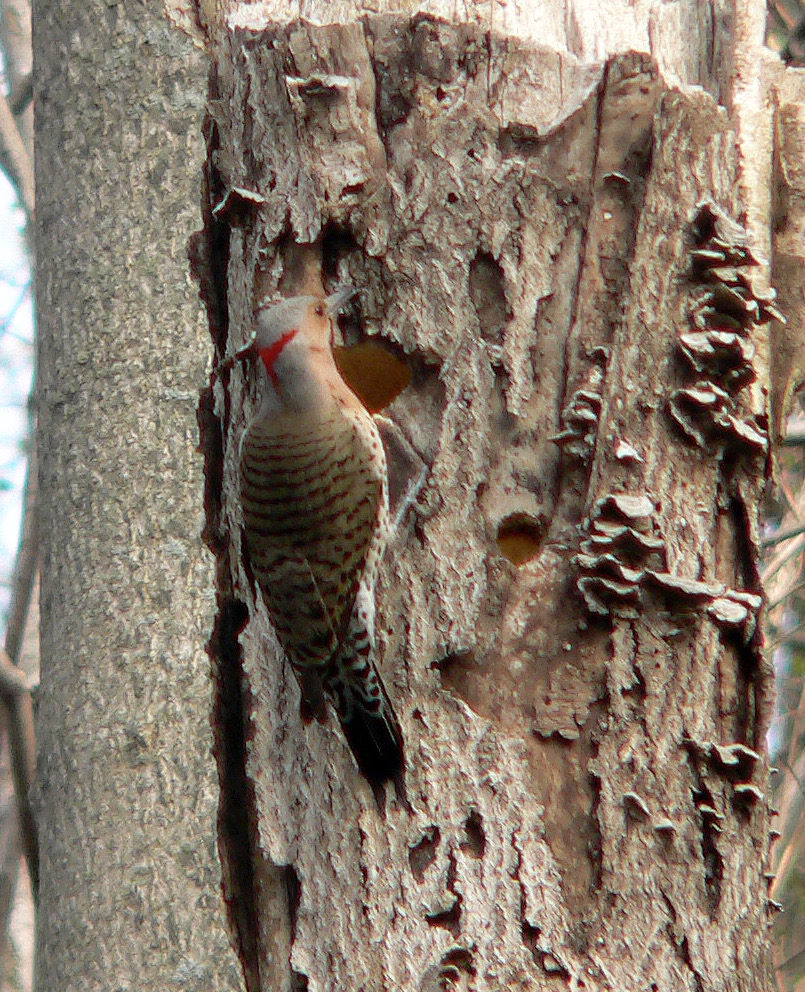 We left Peters Hill and proceeded over to and up Hemlock Hill where the earliest warbler species to arrive almost every spring hangs out. These birds are more often heard than seen. 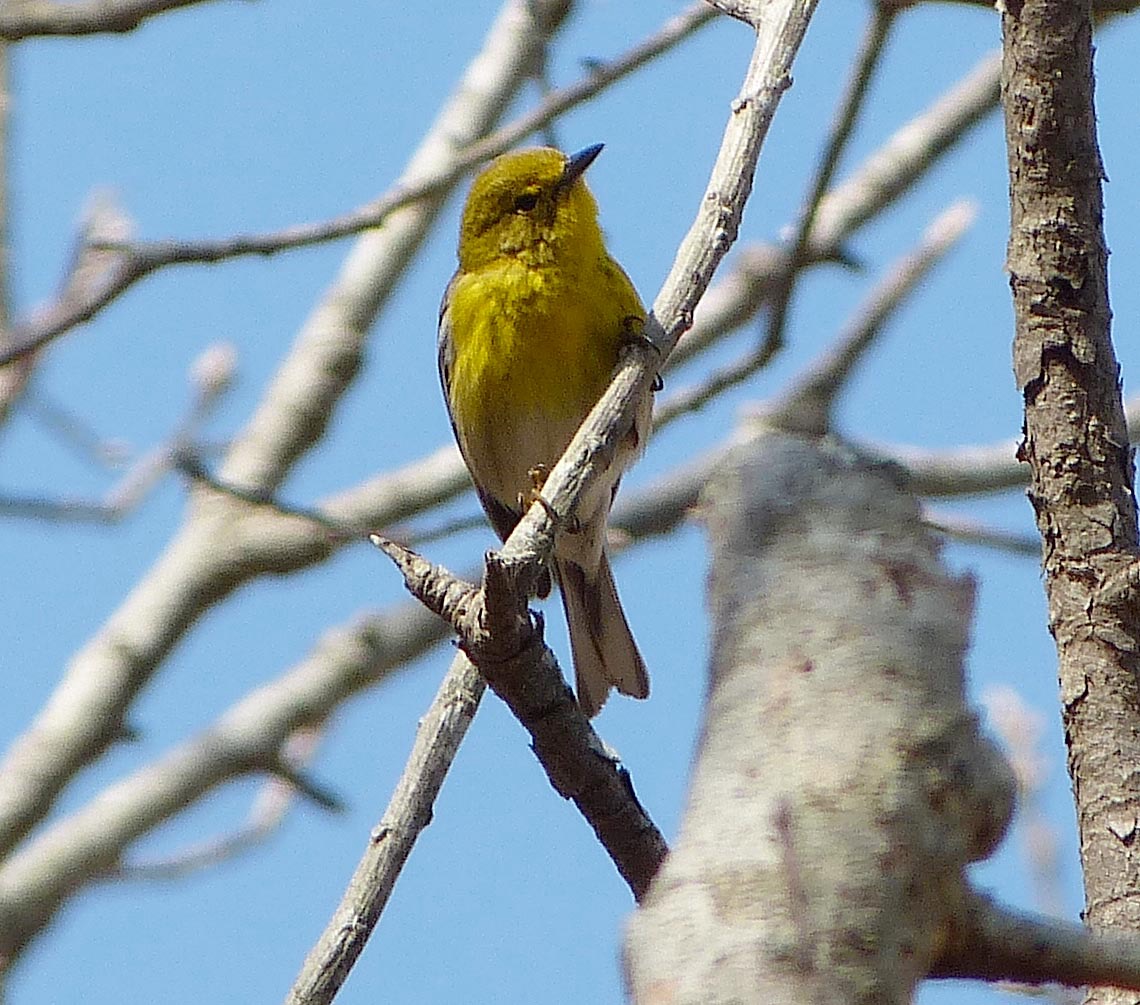 We compared the similar calls of this warbler and the very common Chipping Sparrow. They can be tough to tell apart, but the different habitats that these two species prefer helps.

We finished off the walk in the conifer area across from Hemlock Hill. Three days before the walk, on a tip from another birder, I had found this fur ball high up in a huge fir tree: 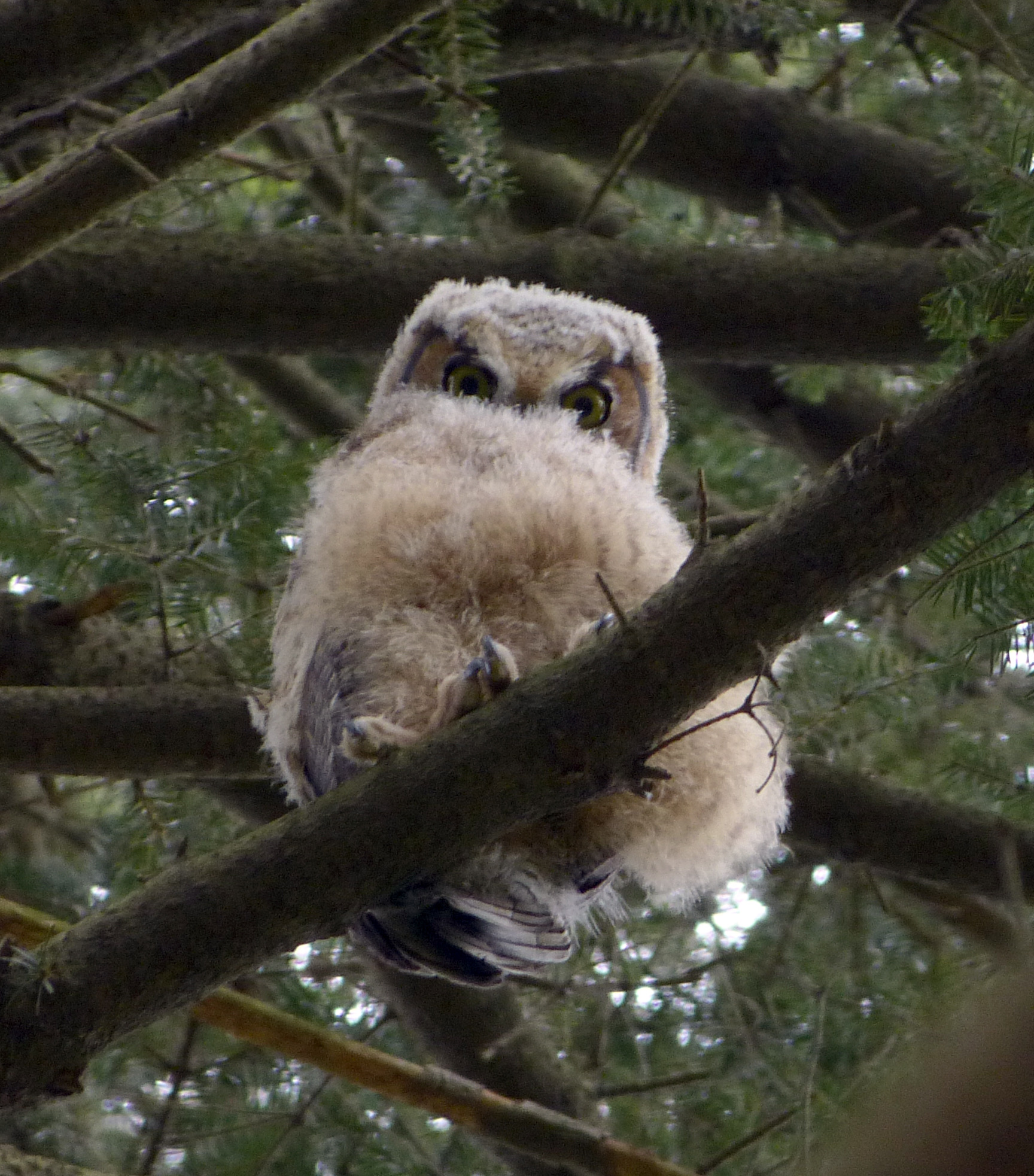 I searched the tree wondering where the adult, that usually guards such young birds, might be. 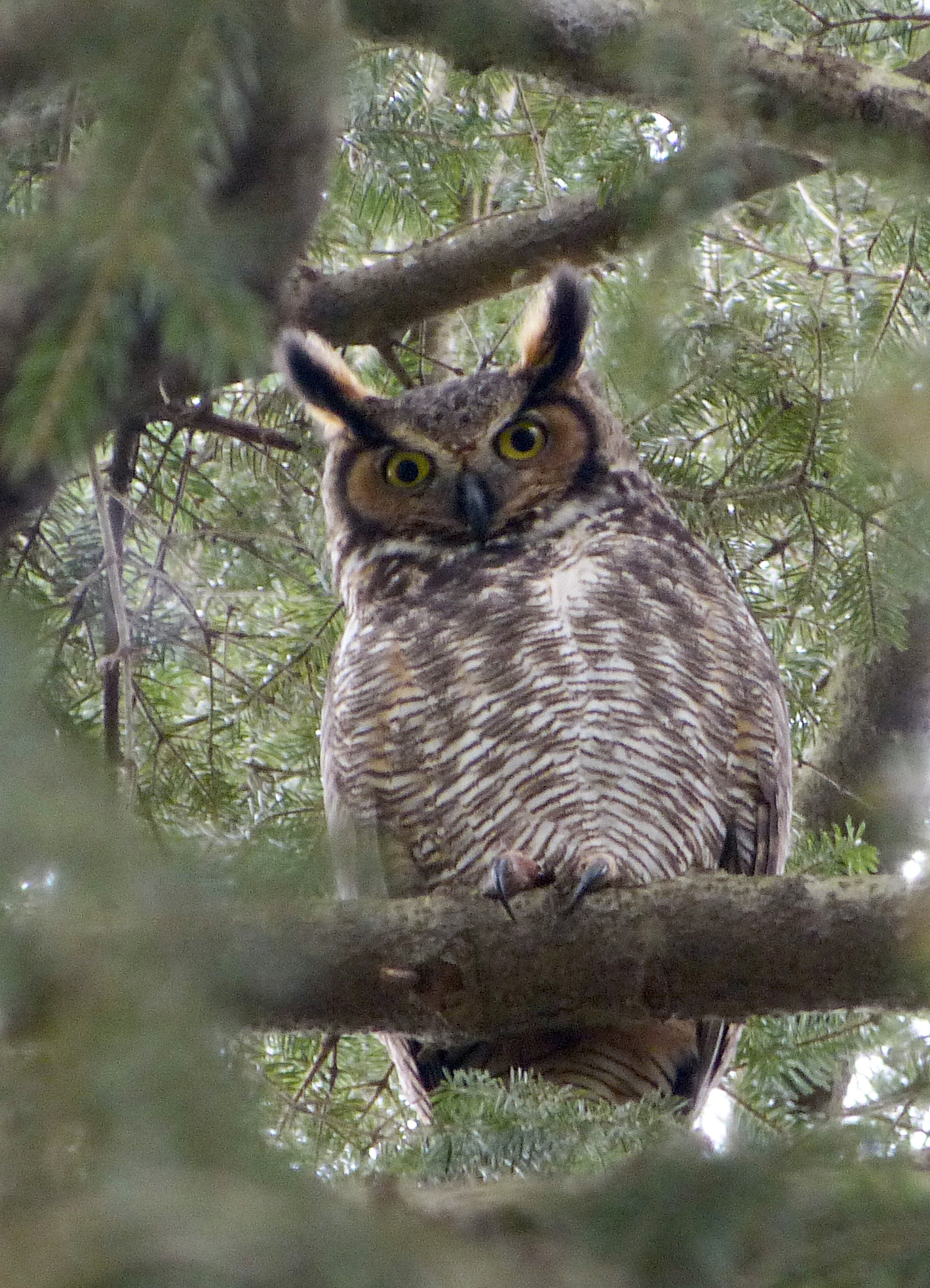 If looks could kill I wouldn’t be writing this blog right now! This is the first successful nesting of this owl species in the Arboretum in more than a decade as far as I am aware.

Unfortunately, as we walked up to the location where I’d seen the owls, a huge, silent, gray bird flew out and away up the hill. Our large group had spooked the adult; we weren’t able to locate the youngster.

Overall, our species list was not that impressive. The morning was such a wonderful intro to a very long awaited spring however that I think everyone was glad they made the effort. Here is the list:

View this checklist online at http://ebird.org/ebird/view/checklist?subID=S18194201

My next walk on Peters Hill will be on Saturday June 7 starting again at 8 AM. I’ll be doing a walk in the Bussey Brook Meadow section of the Arboretum on Sunday May 18 at 8, starting from the South Street Gate.