This year’s Boston Christmas Bird Count (BCBC) was originally scheduled for Sunday December 15, but a wet and heavy snowstorm was considered too hazardous for road and foot traffic so it was postponed to Saturday the 21st. The weather was warmer, but the birding was not so hot.

This was the 41st Greater Boston Christmas Bird Count (actually some local areas, including Jamaica Plain, have been covered since the very first CBC in 1900). For those who are not familiar with the CBC, groups of dedicated birders cover sections of territory within a 15 mile diameter circle, counting every bird seen or heard well enough to be identified. Our local group of seven covered the Emerald Necklace from the Riverway through Leverett Pond, Olmsted Park, Jamaica Pond, the Arnold Arboretum and Franklin Park. In addition Forest Hills Cemetery and the Boston Nature Center in Mattapan were canvased.

Many of the local ponds were nearly frozen over but we did manage to find some ducks in Jamaica Pond and areas downstream along the Muddy River. There were ten species of waterfowl on the big pond, all amassed in an area of open water off Perkins Street. Among them were two female Northern Pintails, subtle beauties blending in with the many Mallards: 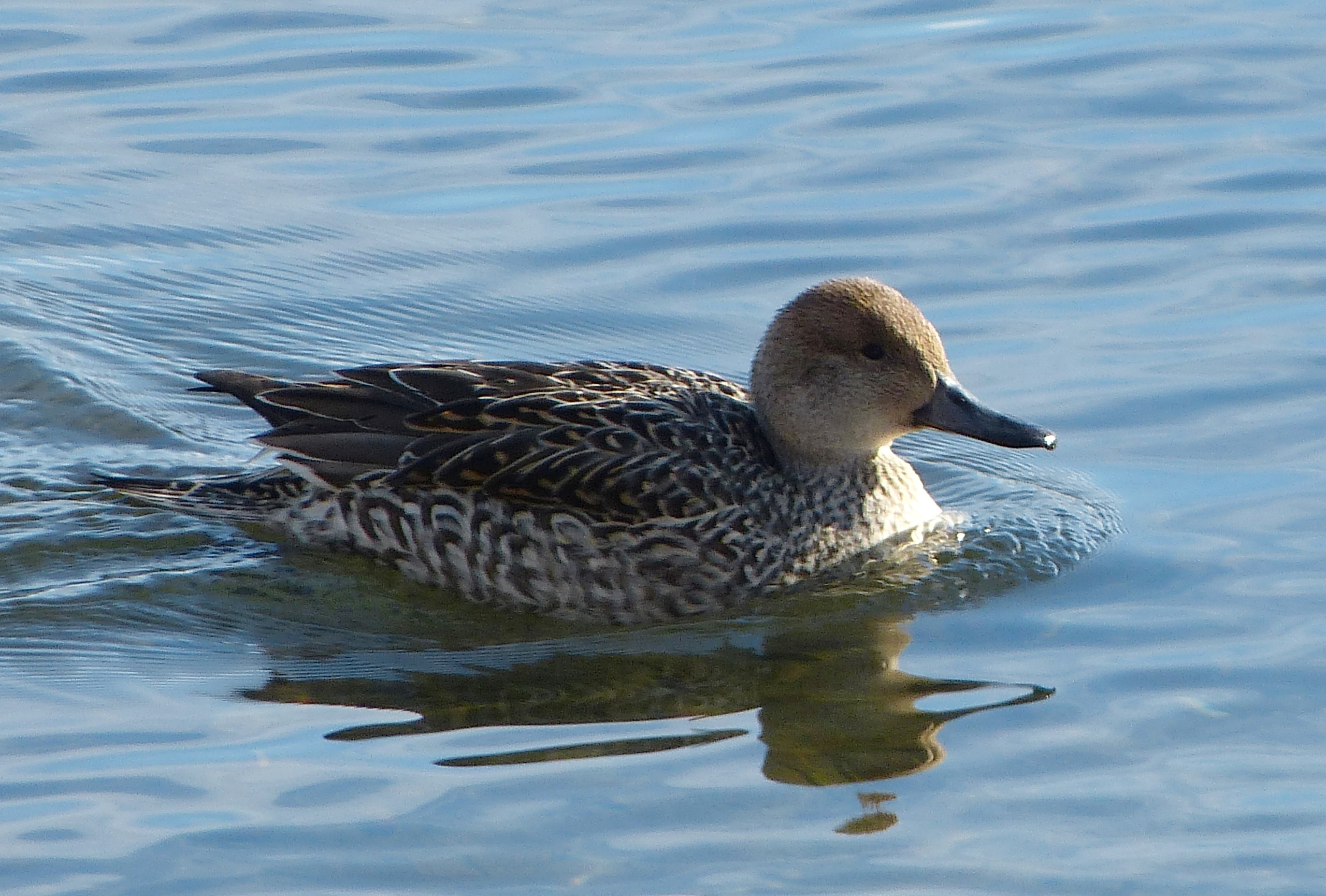 We moved on to Leverett Pond where I had seen two males of the same species on a scouting trip the day before. One of the mysteries of following ducks in winter is when and where they arrive and then move on – and why. When a pond freezes over completely the waterfowl obviously must move. But lots of movement from one pond to another takes place for reasons only the birds know. A week earlier there were at least 40 Ruddy Ducks on Jamaica Pond; on count day only two. Of the 40+ Wood Ducks on Leverett Pond two weeks ago, half vanished and the rest showed up on Jamaica Pond when the former pond iced up. Today there were none on either pond (but two on tiny Willow Pond in between). “My” pintails on Leverett Pond were gone; too bad, because they are a truly spectacular bird: 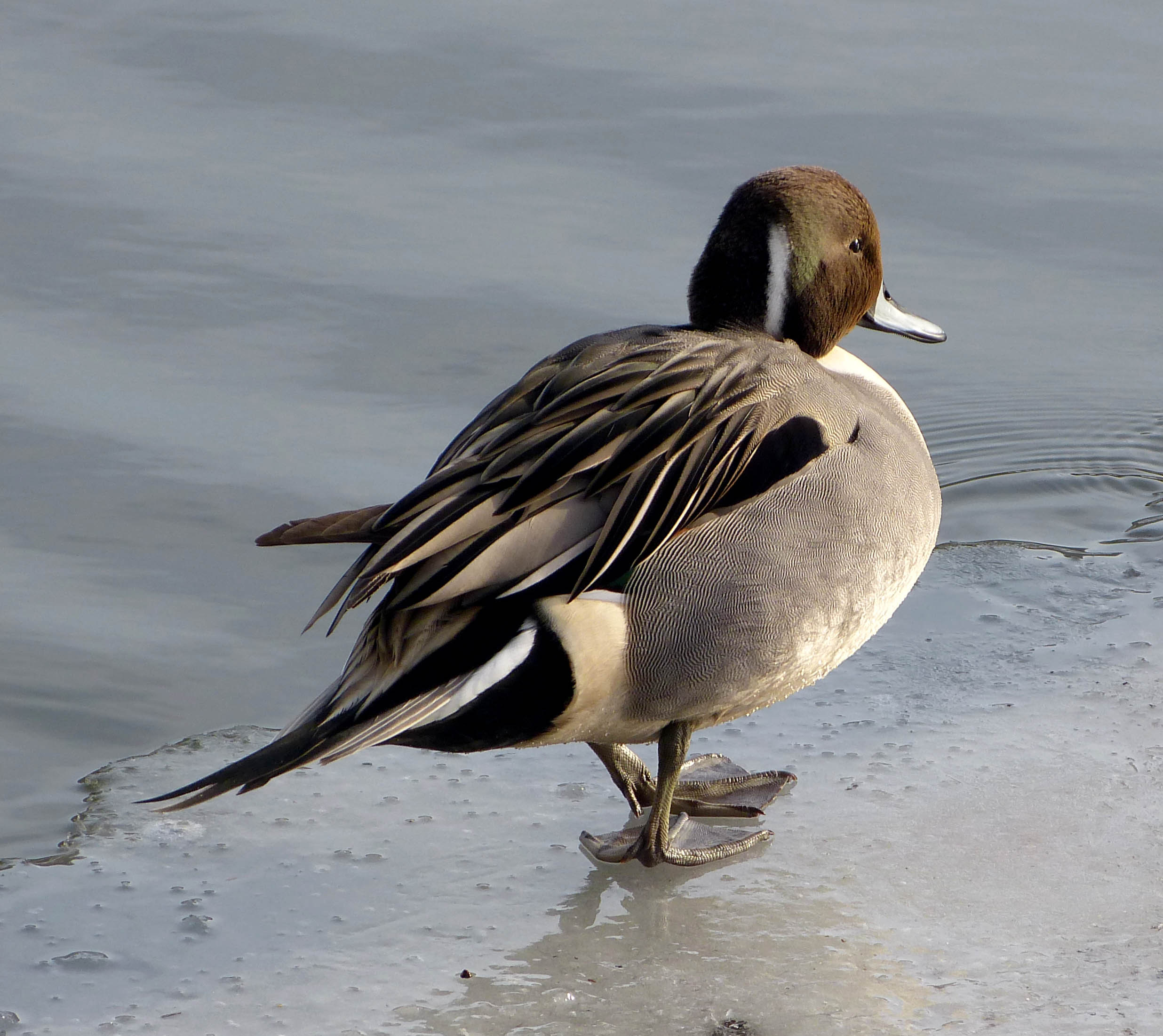 We picked up two more species on this narrow pond- Common Merganser and Ring-necked Duck. Here is a shot of some of the ring-necks:

While we were counting the more common waterfowl, the six Common Mergansers suddenly took flight. I wonder where they will show up next?

The rest of the day- another four hours- was spent looking for land birds. We divided into smaller groups and everyone searched intently. Nonetheless the overall numbers and species diversity was below average for a Boston count. Our group had lots of European Starlings, American Robins, and some of the commoner sparrows were ticked off as well. We had five woodpecker species, mostly Downy Woodpeckers: 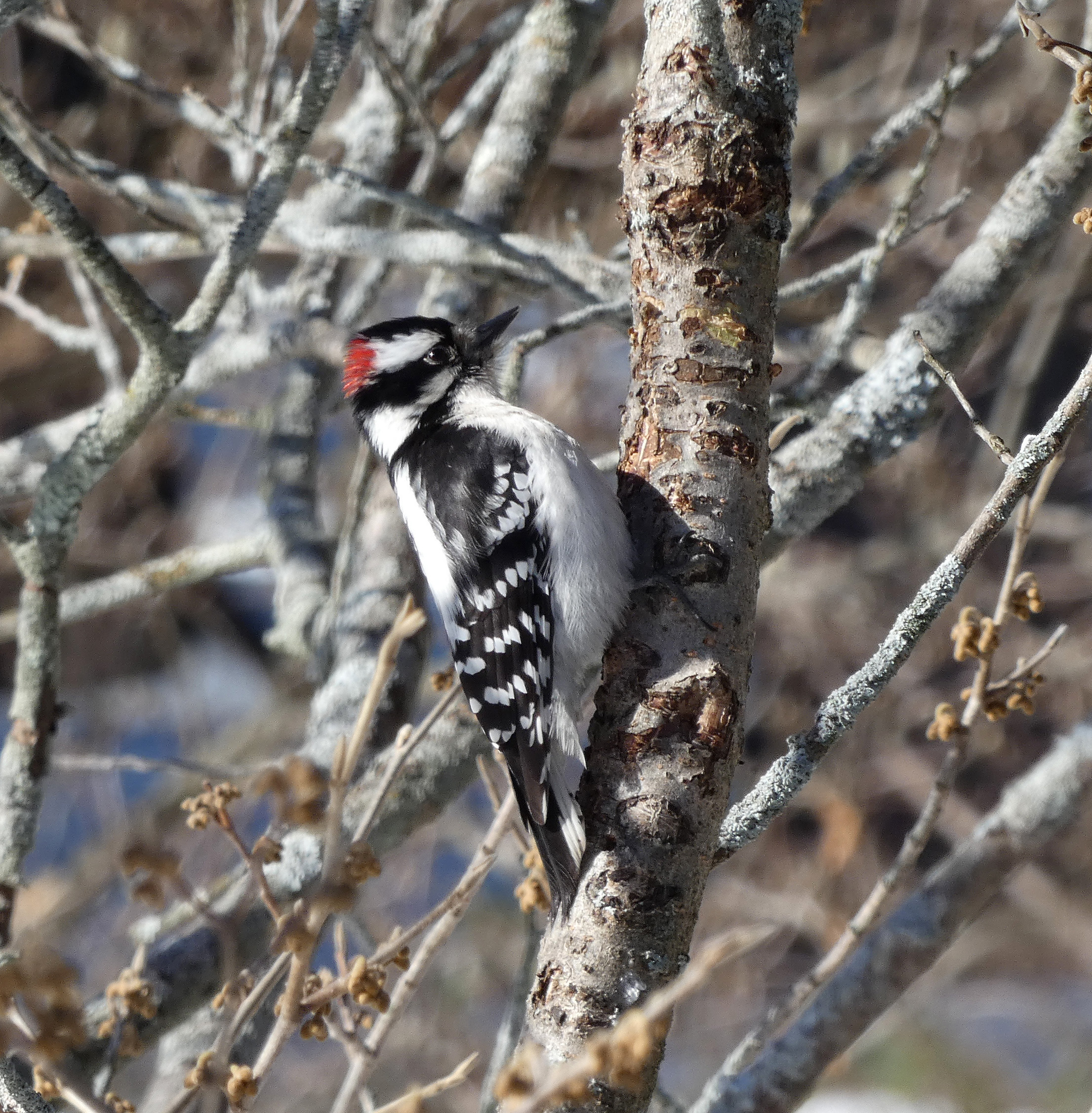 Some of us had started the hunt before daybreak seeking owls. That quest was minimally successful when they found only two Eastern Screech-owls, both in Franklin Park. Another was heard calling in the Arboretum mid-day.

By mid-afternoon we had covered our territory and most of us headed home. Our chief compiler joined a meeting of reporters from other Boston sectors to draw up the final tally. All of that information will then be added to the overall numbers as other states and countries complete their counts; then comparisons can be made to past years. Some species will have declined, others may have increased, and area maps will need to be modified to reflect shifts in the avian population.

I will be leading a walk in the Arnold Arboretum on Sunday January 12th beginning at the main gate at 8:30, weather permitting.

The GBCBC report has just been sent out, here it is:

The Greater Boston CBC was held on Saturday postponed from last Sunday , 83 participants tallied 108 species, slightly less than the average of 116 over the last ten years. The count also recorded Eurasian Green-winged Teal and Ipswich Sparrow and one exotic- a Mandarin Duck in Saugus (not sure if it is the same one from Leverett Pond which was not seen). So far there was an additional six species seen during count period. The cold weather froze up many of the ponds and some dabbling ducks were missed and in low numbers. The cold weather also had an effect on passerines that are often noted in a milder winter. Highlights included the White-winged Dove, a second record for the Boston count, a Lark Sparrow, also just the second record. Others were Snow Goose, Eastern Phoebe, Marsh Wren, Chipping Sparrow, Lincoln’s Sparrow, Eastern Meadowlark and Rusty Blackbird. Note the record number of Snowy Owls-28, previous high was 21. Norman Smith counted 18 at Logan Airport. So far this year he has banded 42 Snowies, 32 from Logan Airport!!
Finally the gull extravaganza at Revere Beach is a sight to see, thousands of sea clams washed ashore during last weeks storm and a feeding frenzy is underway, the Boston CBC recorded a recorded number of 20 Iceland and 3 Glaucous and one or two possible Thayer’s to be determined.