On Saturday May 14th I joined two other birders for a full day of birding in areas south of Boston to support the Boston Nature Center’s Bird-a-thon (BAT) team. My colleagues had actually started BAT birding on a rainy Friday evening, picking up at least a half dozen of the 75 species we reported for our total effort.

We left Boston at 6 AM and hit our first stop, Wompatuck State Park, before 7. There are several target birds here (Ruffed Grouse, Worm-eating Warbler and others); we didn’t get any of them though. We did find a lot of nice migrants and some good resident birds. Ovenbirds were everywhere, mostly heard but occasionally seen: 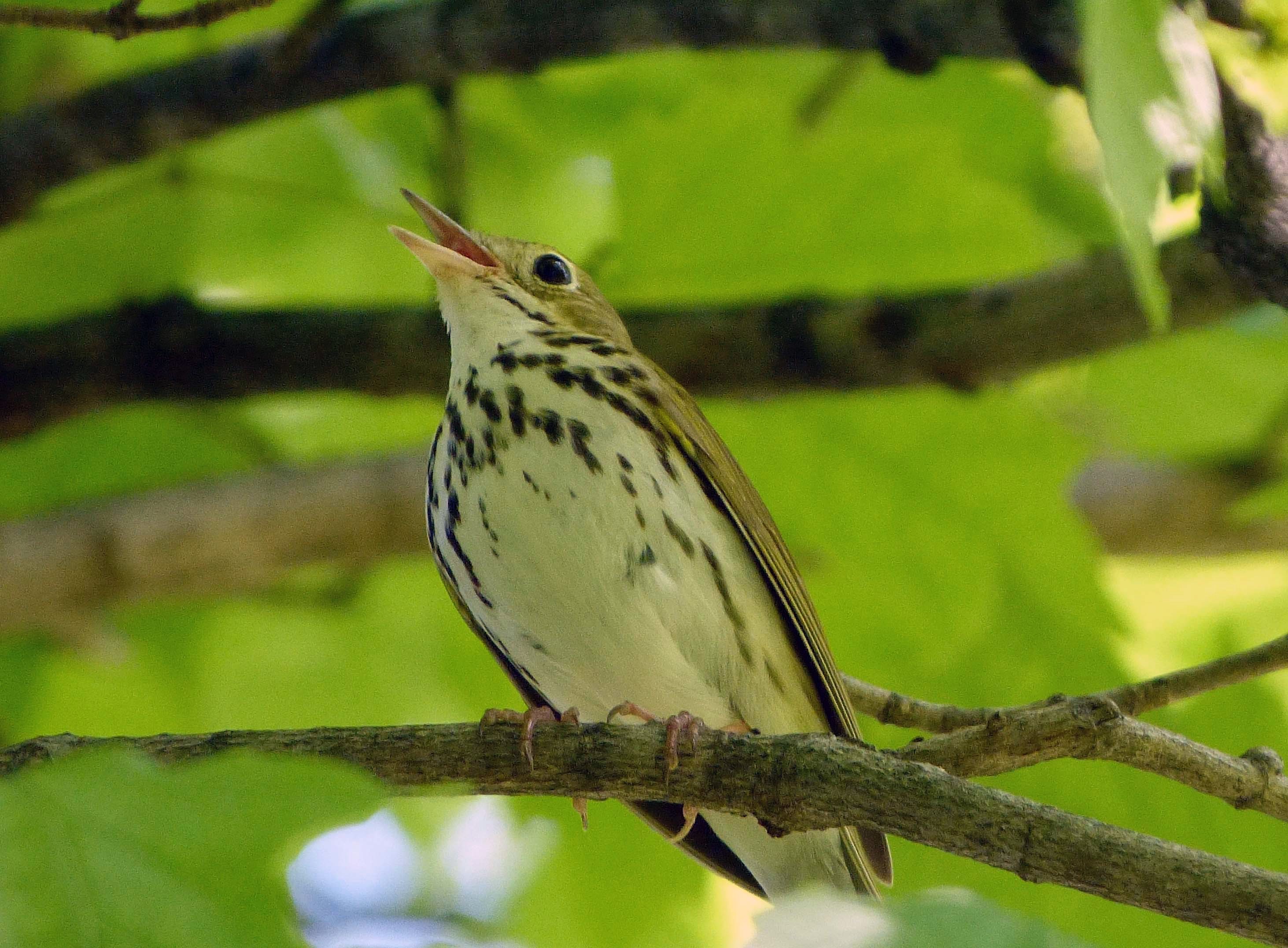 Ovenbird. This warbler is most often on or near the ground, where it builds it’s covered oven-shaped nest. But it is hard to see; most often heard by the loud “teacher,teacher,teacher” song.

Another bird heard more than seen was the Red-bellied Woodpecker. Here is it’s distinctive call:

This is a bird that can be identified without seeing it; the call is diagnostic.

We moved on to World’s End, hoping without success for bluebirds, meadowlarks or bobolinks. At our next stop, Daniel Webster Wildlife Sanctuary- MA Audubon, we hit on one of them: 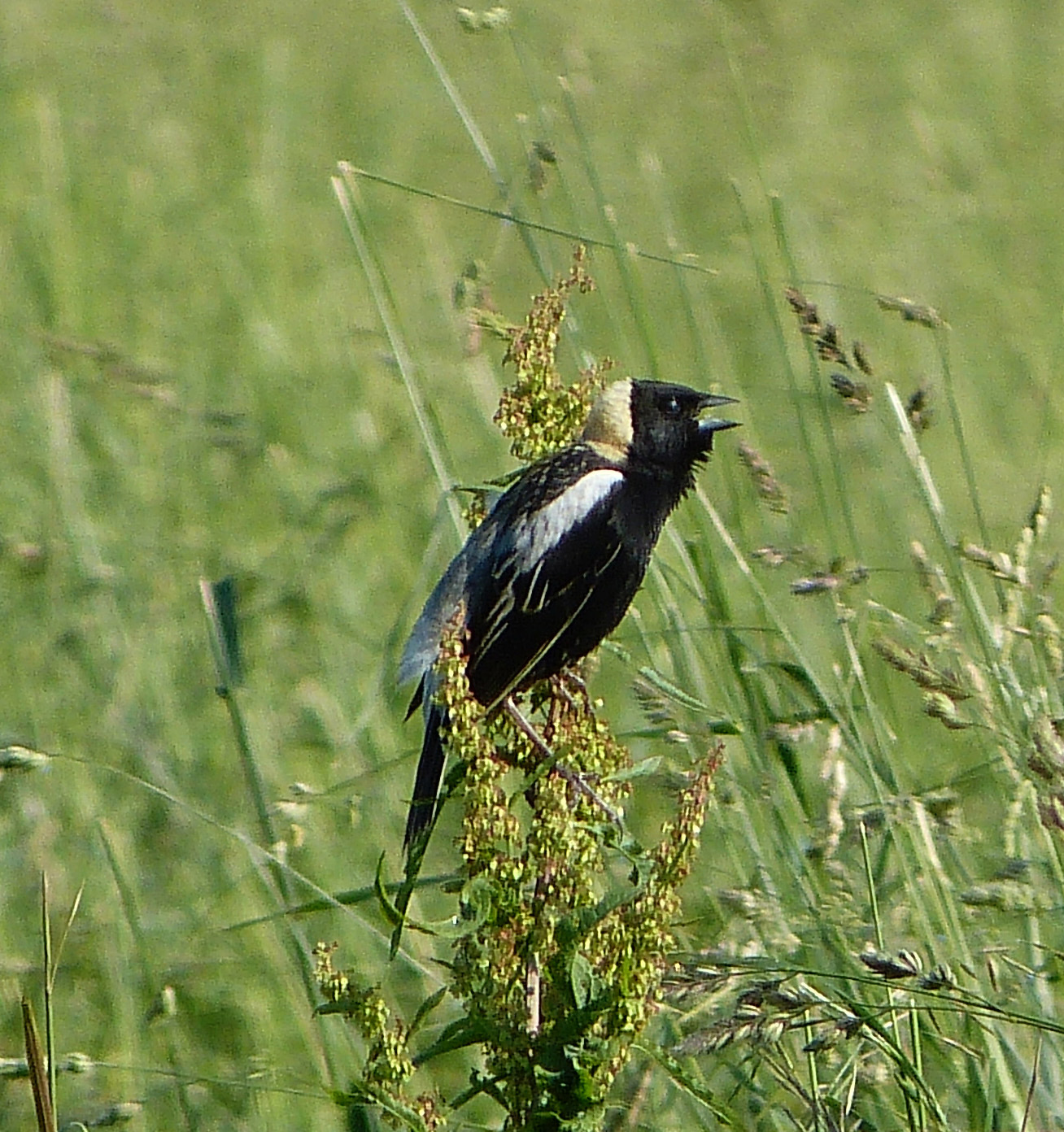 Male Bobolink teed up in it’s typical way in a field of grass.

While we ate our lunch in a bird blind next a pond there, we admired the lovely Barn Swallows nesting nearby: 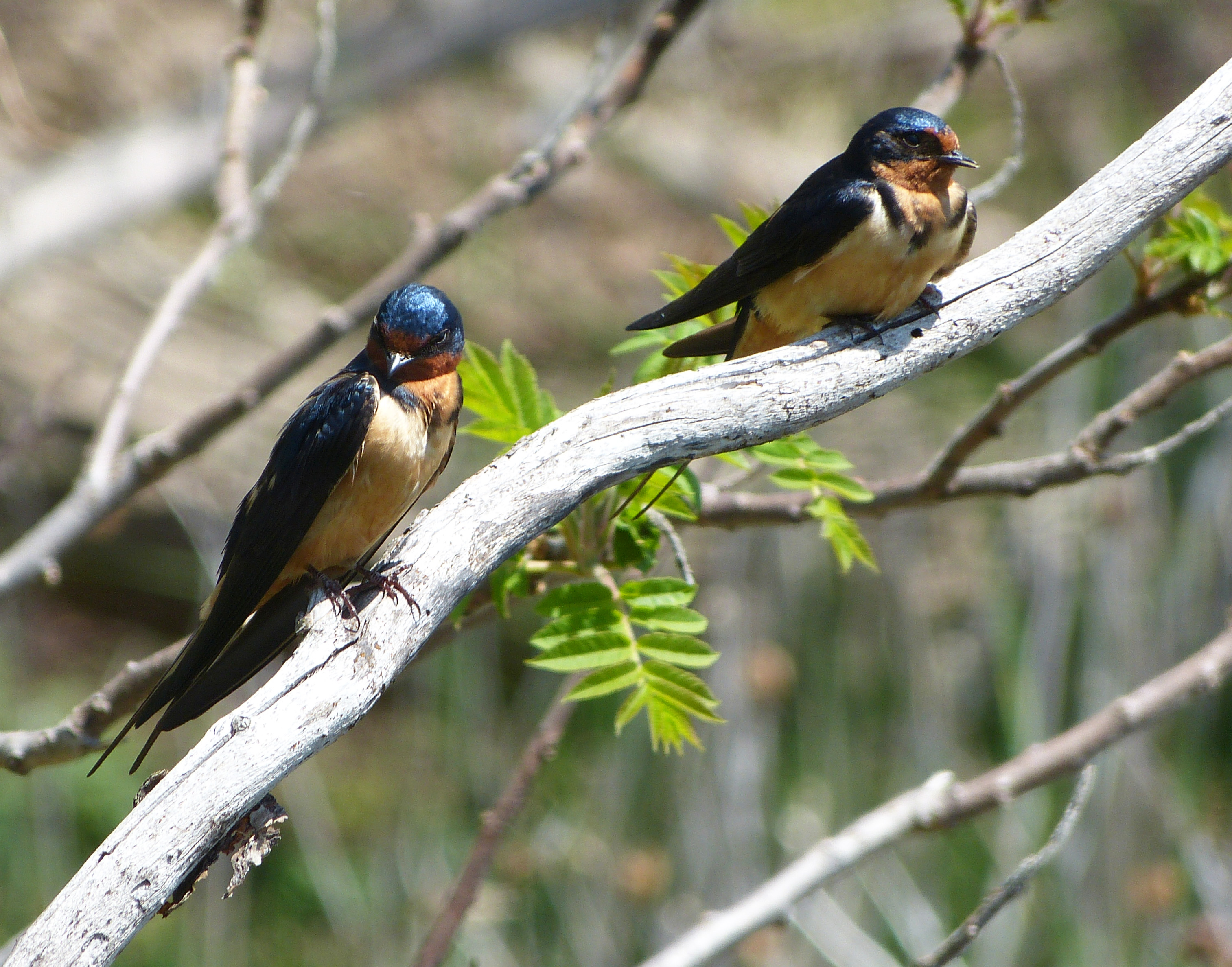 We also got our only shorebirds here; a Killdeer and several Least Sandpipers: 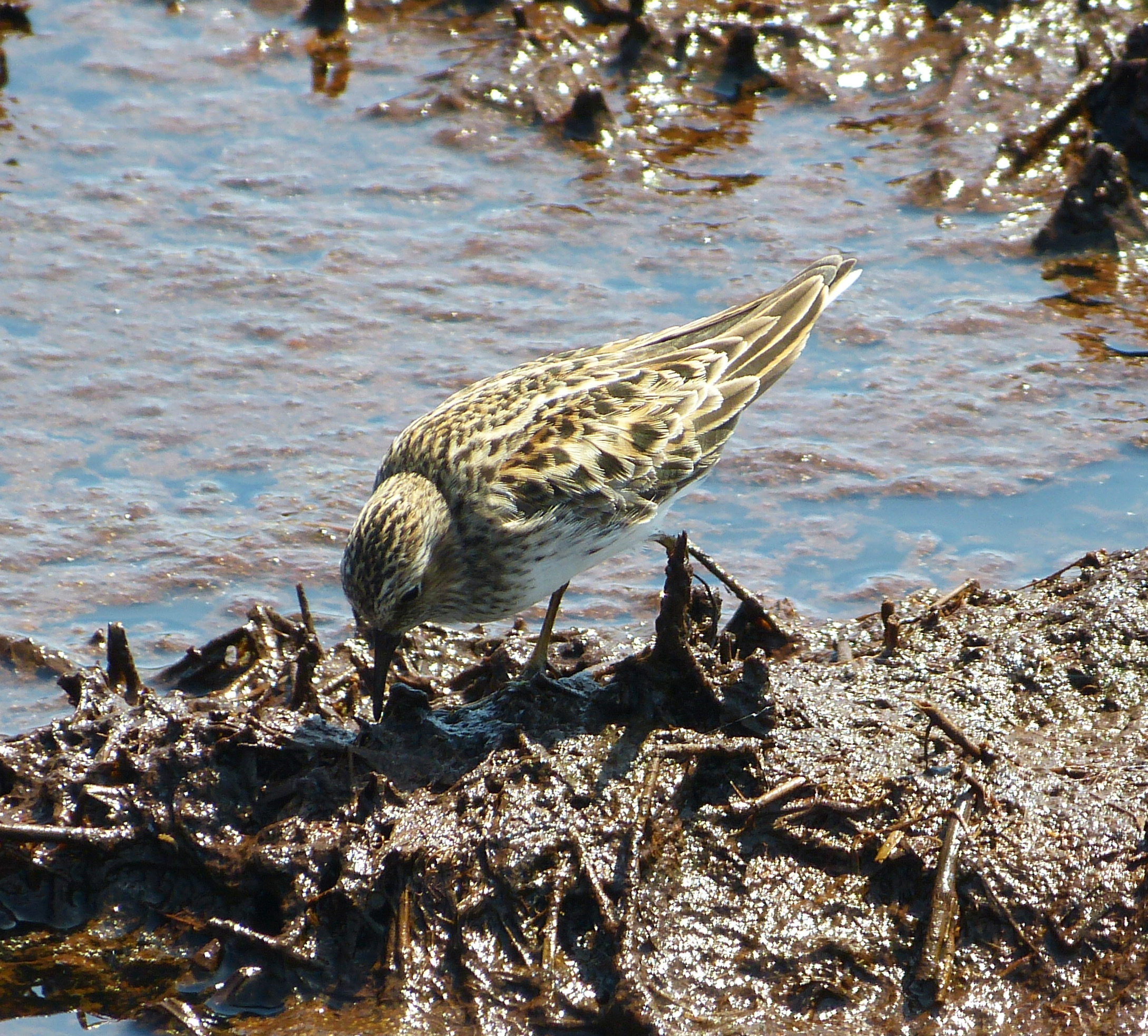 Our smallest sandpiper, the Least is distinguished from the many other “peeps” by a slightly down-curved bill, yellow-green legs (most have black legs), and a brown rather than grayish coloration.

By now it was late afternoon and I was flagging. We debated going to a small nearby spot with a funny name which one in our group is keen on; Ferry Hill Thicket. I on the other hand had found this tiny overgrown suburban brush pile almost devoid of birds on several prior Bird-a-thons, so I wanted to skip it and head home. But as we were about to leave Daniel Webster, we ran into another group that was birding for a different sanctuary. Bob Stymeist, one of Massachusetts’ great birders, was with them and we asked how they had done, especially on the warblers. He reported that they had had similar results with these colorful spring migrants; poor numbers and few species. “Except at Ferry Hill Thicket”, Bob reported.

Off we went to this birding hole in the wall where we had 8 species of warbler, plus several other good migrants in half an hour! I had to admit I was too quick to write this place off as a birding “ferry tale”.

When we arrived back in Boston we had an hour before the Bird-a-thon officially closed, so we made a brief stop at Mission Hill. Here there are another two very small urban wilds; Iroquois Woods and McLaughlin Woods. Although I live within a mile or so of these forested areas squeezed between houses, I had never birded in them. My mistake; they are both urban hot spots and even though the wind had picked up, we found a number of migrants. Here is a photo taken of one of them: 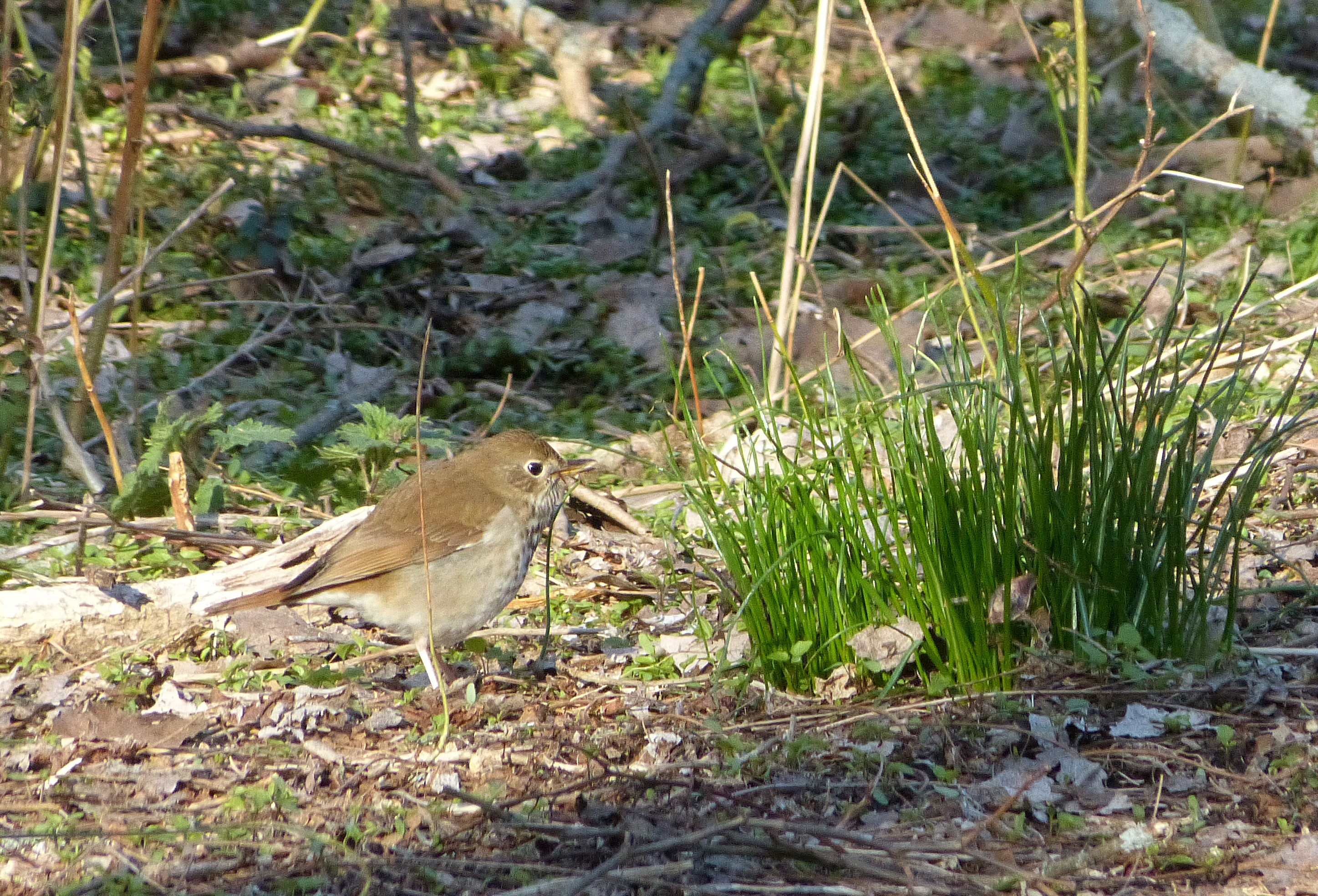 The Veery, a member of the thrush family, has one of the most mellifluous songs of any North American bird.

All in all it was a very successful Bird-a-thon. The real point of the day, after all, is to raise money for Audubon, and in this case for the wonderful programs that the Boston Nature Center in Mattapan provides for people of all ages; especially kids. Our small team raised almost two thousand dollars, a good share of the ten thousand raised by BAT for the BNC. Thanks to all who contributed.

This entry was posted in Avian by rgm. Bookmark the permalink.