The weather folks are claiming that this Saturday will be the coldest day so far this winter.  Sunday morning at 9AM, the scheduled kickoff for the January Winter Bird Walk in the Arboretum, is predicted to be minus 3, with winds at 10-12 mph.  Therefore I’m postponing the walk until Sunday January 14th, same time, same station.  Let’s hope for winter, not arctic, weather.

Even though it has been nasty cold, I have gotten out briefly and seen and photographed a few birds. Yesterday I sought a rarity that has been hanging out in a park near Carson Beach in South Boston since Christmas- Ross’s Goose.  This is the first Suffolk County record ever for this small goose that closely resembles another locally rare goose- Snow Goose. They are differentiated by the Ross’s smaller size, shorter bill, and the absence of a “grin patch”. Who knew geese could grin?

In any case my wife drove as we circled Moakley Park and I quickly spotted the bird, hanging out with a small flock of much larger Canada Geese on the barren field: 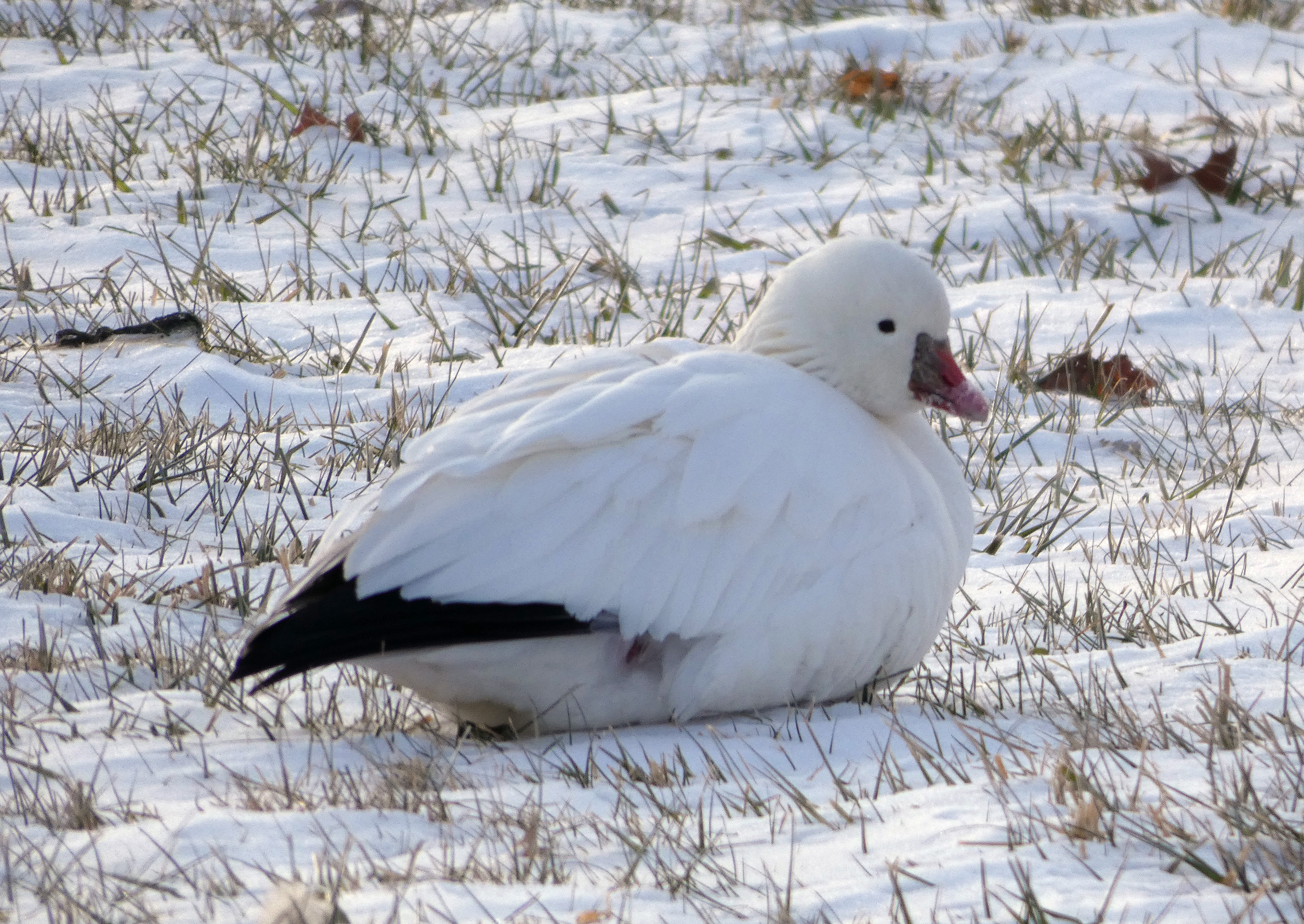 Ross’s Goose. A small white goose with black primaries and tiny triangle pink bill. These geese are common in California, but very rare on the Atlantic Coast.

Here is another shot of the bird after it took flight. 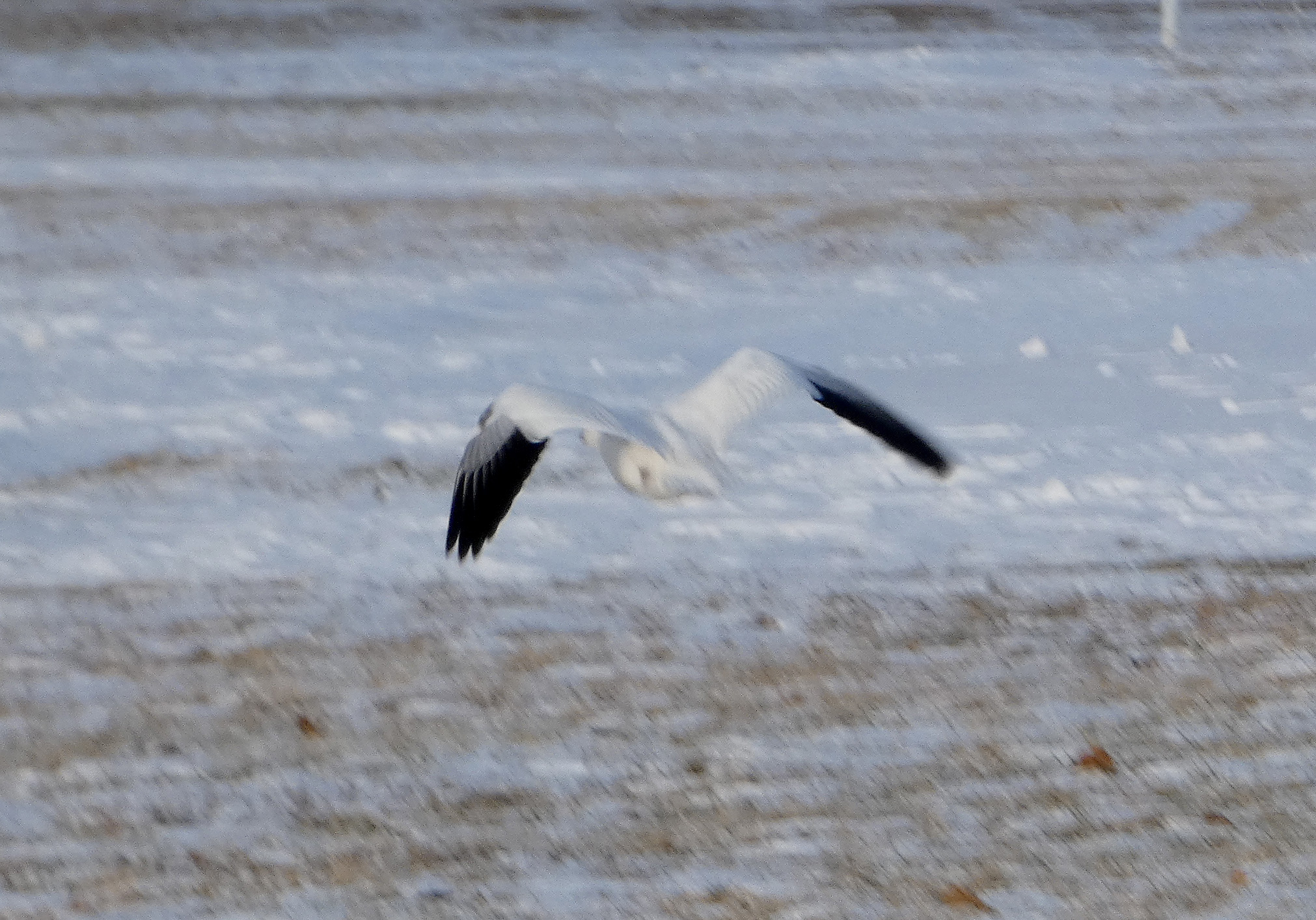 In this image you can see the black primary wing feathers and barely see the reddish legs.  The bird was a lifer for me!

I also checked out the local ponds on the Emerald Necklace.  Jamaica Pond is down to a small swimming pool of open water with four swans and a few other winter waterfowl; not clear how much longer they can hold out there.  Leverett Pond, as usual, was partly open at its northern end and held a few very photographable ducks. 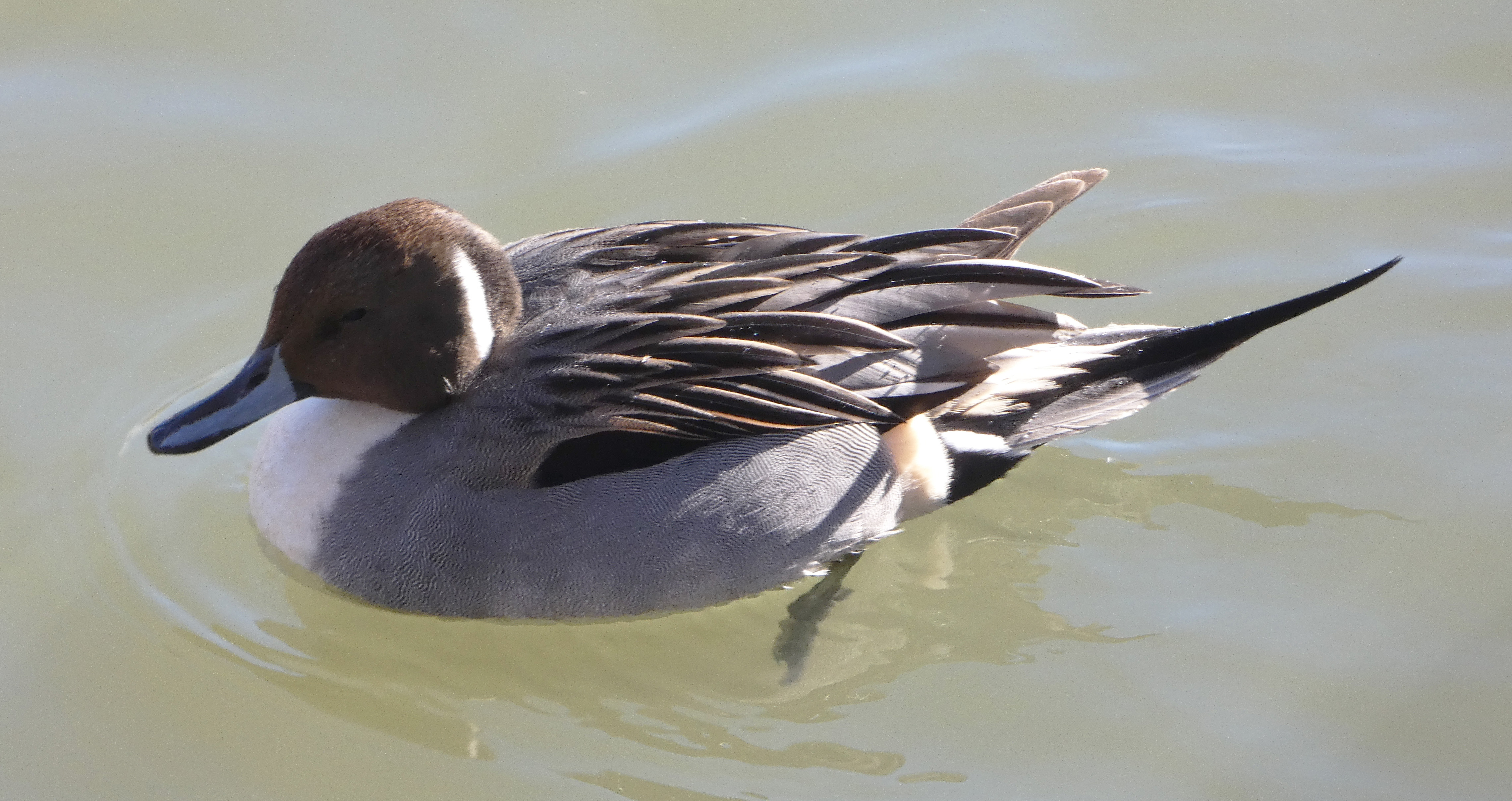 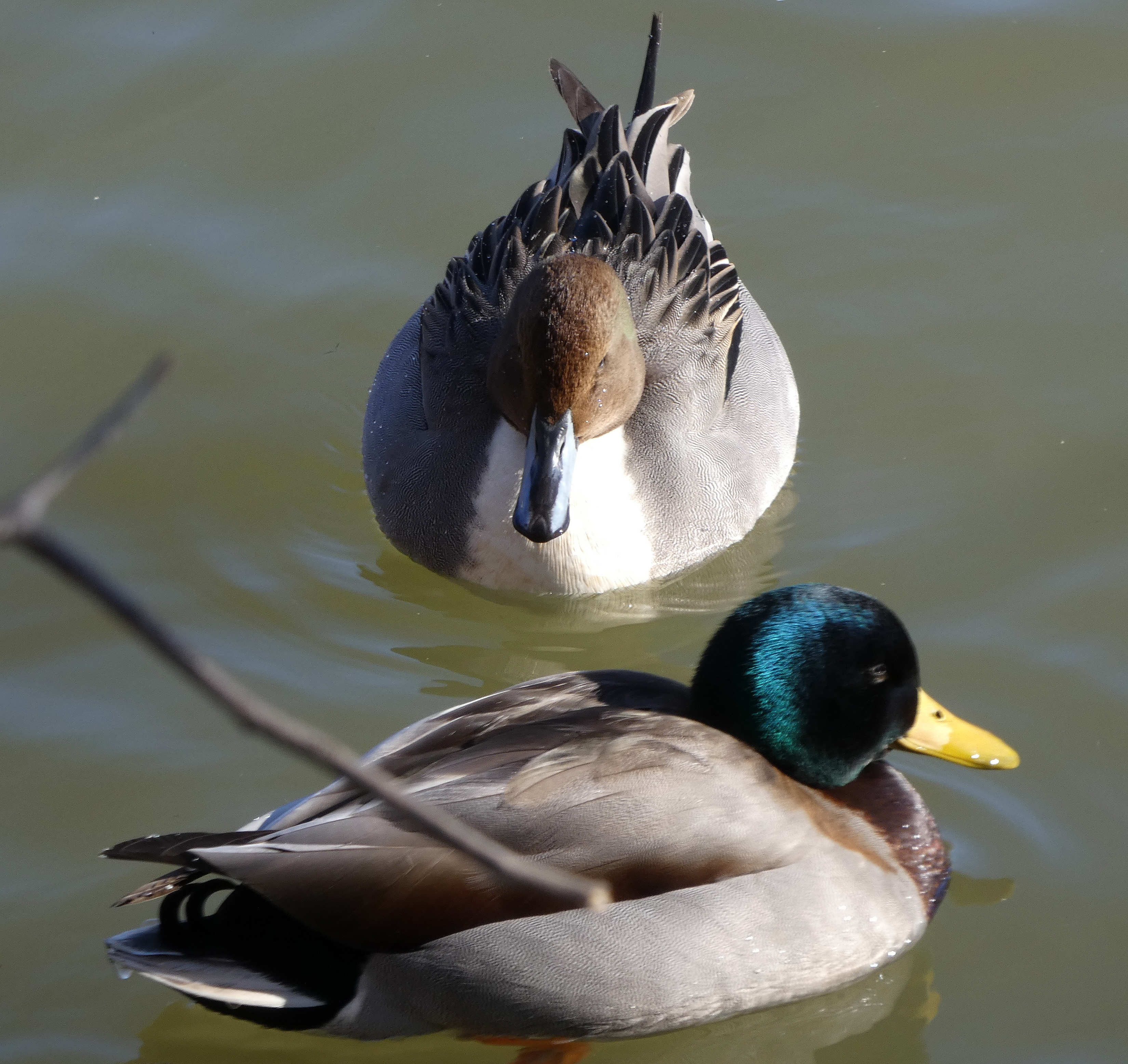 Another image of the pintail, above a common but lovely male Mallard.

And I can never get enough of the spectacular Wood Ducks; there were at least 6 still surviving in the open patch. 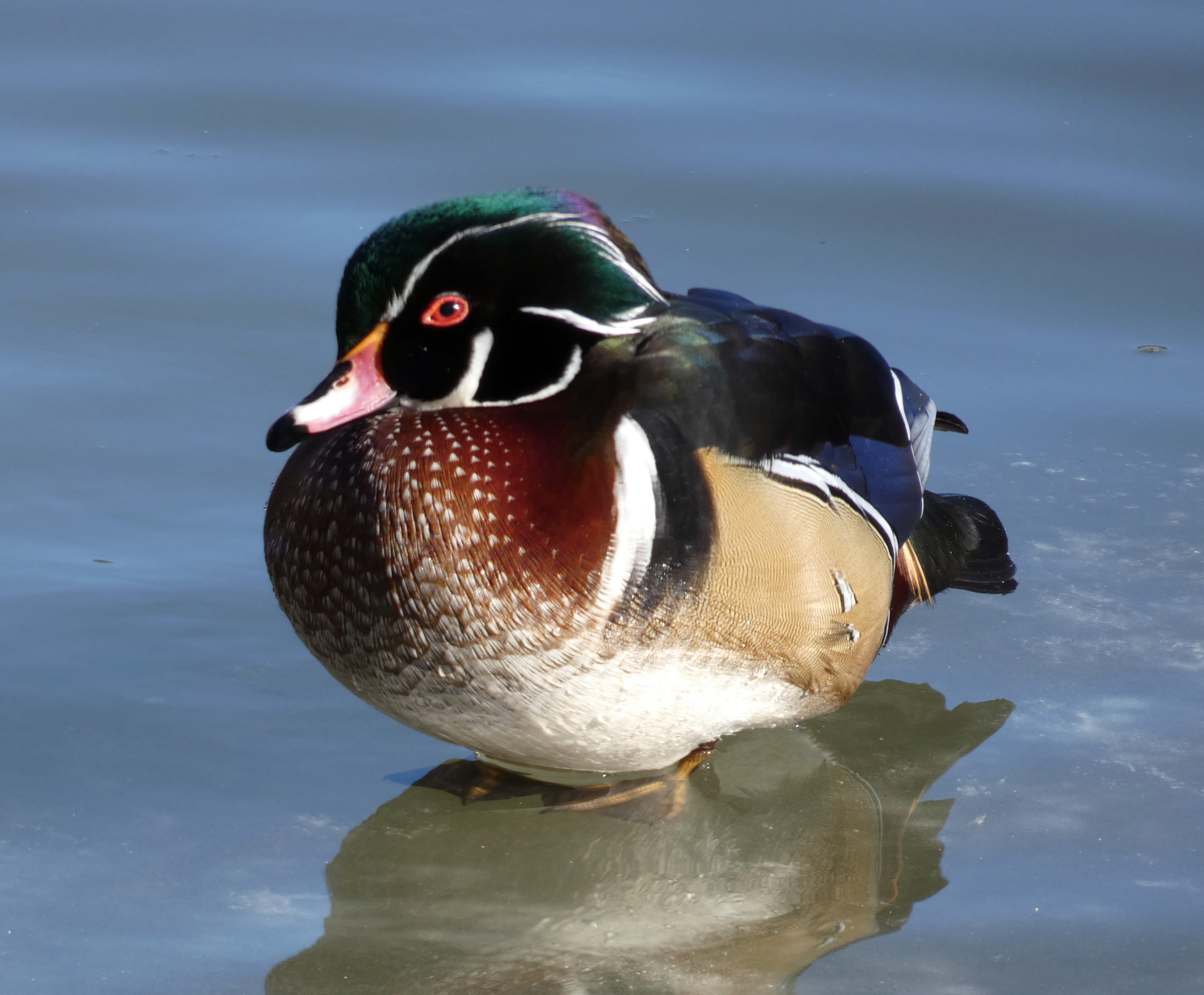 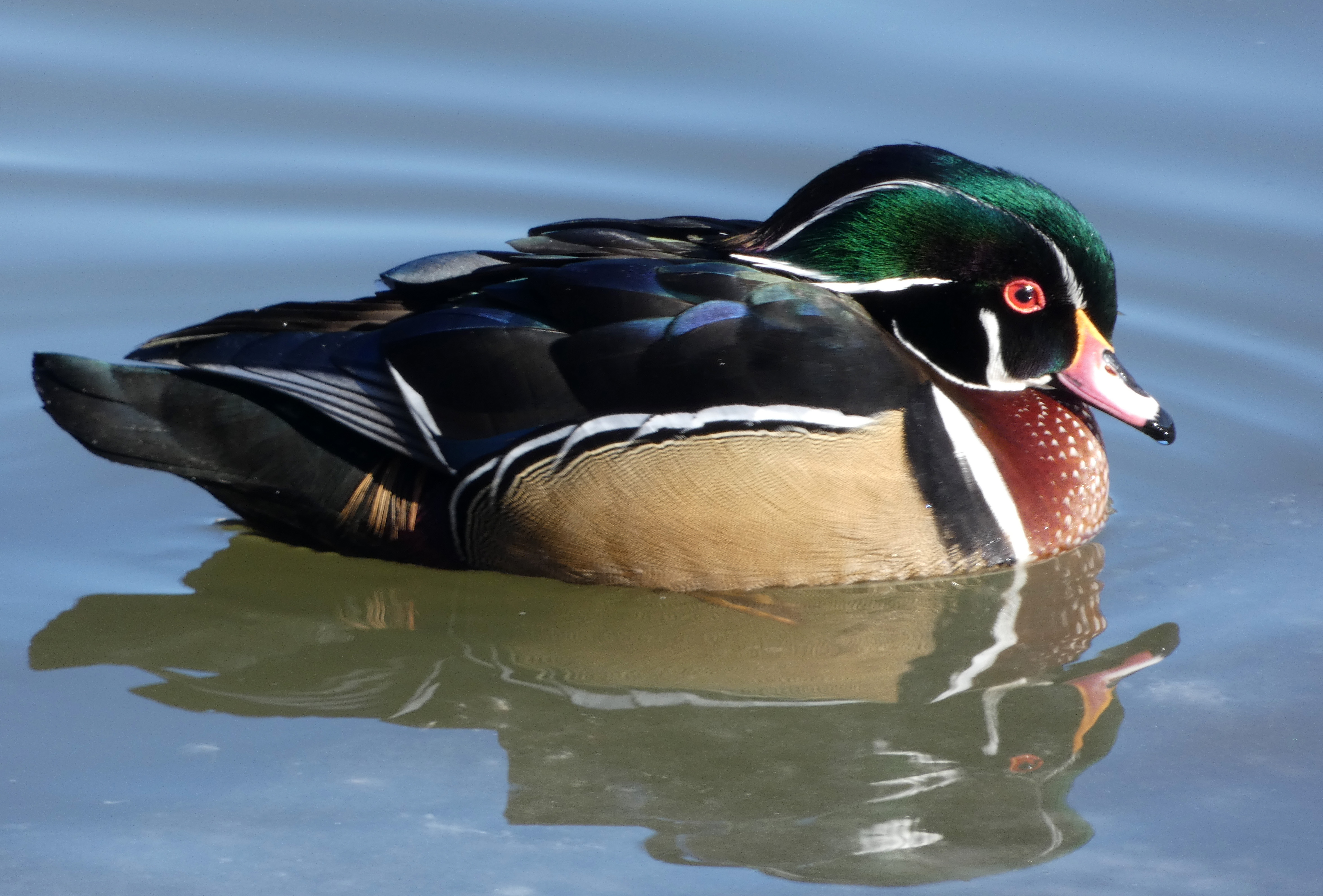 Note the iridescent sheen on the crest and the subtle patterns on the breast and side. And what eyes!

While I have your attention, the annual Boston Christmas Bird Count was held in relatively balmy weather (highs nearing thirty!) on December 17, 2017.  The seven people in the Jamaica Plain sector tallied 48 species.  Here is the list for the entire Boston count (thanks Bob Stymeist):

The 45th Greater Boston Christmas Count was held Sunday December 17th.  124 birders recorded 115 species and an additional five species during the Count Week.  There was one new species, a Ruby-throated Hummingbird added to the overall list which is an amazing 231 species!

I hope many of you will join me and my co-leader Brendan Keegan, who will discuss how birds utilize the woody plant collection in the AA as we walk, on Sunday January 14th, beginning at 9 AM from the front gate.