I led my first spring bird walk on Friday April 17th at the Boston Nature Center Wildlife Sanctuary in Mattapan. It was raining when I arrived and I was about to call the walk off but others showed up so we decided to make a go of it until the rain became unpleasant. We headed to the Clark-Cooper Community Gardens hoping to locate the monogamous pair of killdeer that have nested there in recent years, and were not disappointed. The birds were quite agitated with our approach and one began the ‘broken wing display’ for which these shorebirds are famous. Killdeers do this to draw predators away from their nests; just when the predator closes for the kill the bird ‘recovers’ and flies away. Because Here is a link to such a display I found on YouTube.

Our bird was more dramatic in her distraction routine than the video. None of us had witnessed this so clearly before. After a minute or so we withdrew so as to not disrupt the nesting activity.

Against predictions, the rain stopped so we continued our walk. At the beginning of the Snail Trail we spotted a lovely Hermit Thrush: 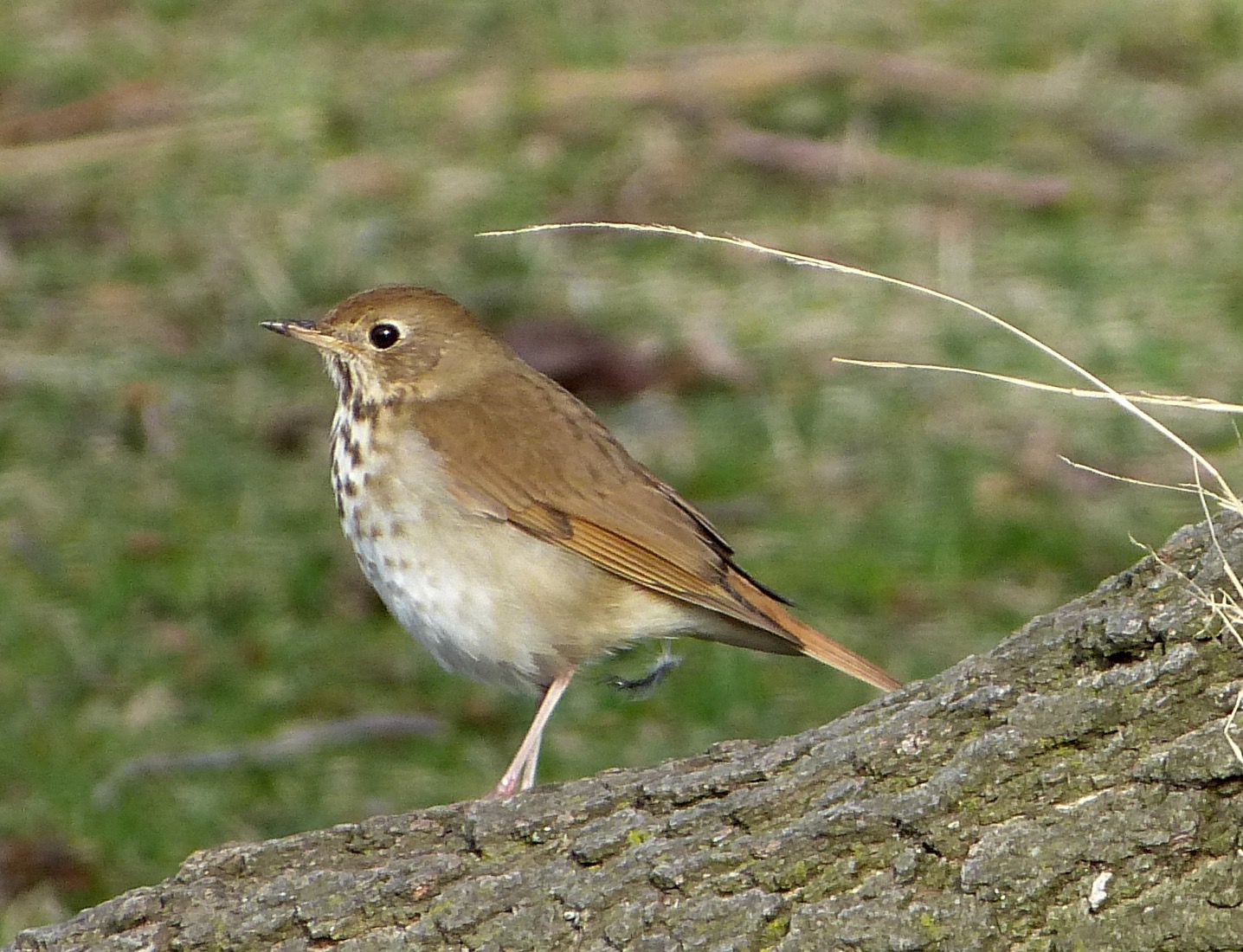 This is the only thrush (other than the ubiquitous robin) likely to be seen this early in the spring; it’s rusty tail, contrasting with a brown back, is distinctive. As we continued we noted that the grounds were full of the sights and sounds of Red-winged Blackbirds. Most were males which arrive each spring nearly a month ahead of their eventual mates. We saw only one female, a drab bird looking a bit like a big, dark sparrow.

Most of the other birds we saw were regulars for this time of year. Seeing a Mourning Dove on nest was a treat; while this is not today’s nest, it gives one a sense of what we saw (no young yet):

Mourning Dove nest with 3 young. This nest was in the Arnold Arboretum last year. The nest of this bird is a flimsy one, built of sticks.

Mass Audubon Boston is especially known for its regular flock of Wild Turkeys, but oddly we saw none. On my scouting walk the day before, this guy looked me over:

Wild Turkey. This bird appears to be a young male. Seen just off the boardwalk on the Fox Trail.

Here is the list of birds seen or heard today:

View this checklist online at http://ebird.org/ebird/view/checklist?subID=S22904394

Mass Audubon’s Boston Nature Center is a special place for experiencing nature close up within the urban environment. They have many programs focused on kids including a certified pre-school, school vacation and summer day camps, and other activities year around. They deserve everyone’s support. One way is to support the Center’s Bird-a-thon team, which will join other Mass Audubon birding groups throughout the Commonwealth, competing to see and hear as many birds as possible beginning at 6PM Friday May 15th for the next 24 hours. I’ll be part of the Boston team.

I’ll be doing a series of spring walks in the Arnold Arboretum, beginning tomorrow, April 18th at 8AM and starting for the Main Gate of the Arboretum on the Arborway. Hope to see you there!