Five years ago I was walking along Forest Hills Road near Lawson Pond in the Arnold Arboretum when I was confronted by several large wasps who seemed to have a great interest in me; I beat a hasty retreat- but not before I got a picture of one of them:

After reviewing some field guides I determined the insects were solitary wasps called Cicada Killers Sphecius speciosus.  I sent the image to an AA staffer who tends to the plant collection in that area and she put me on to a great learning experience a few days later.

Gerry Bunker is an amateur entomologist who had been asked by a fellow bug guy to help him collect specimens of the annual Dog-day Cicada Tibicen linnei. 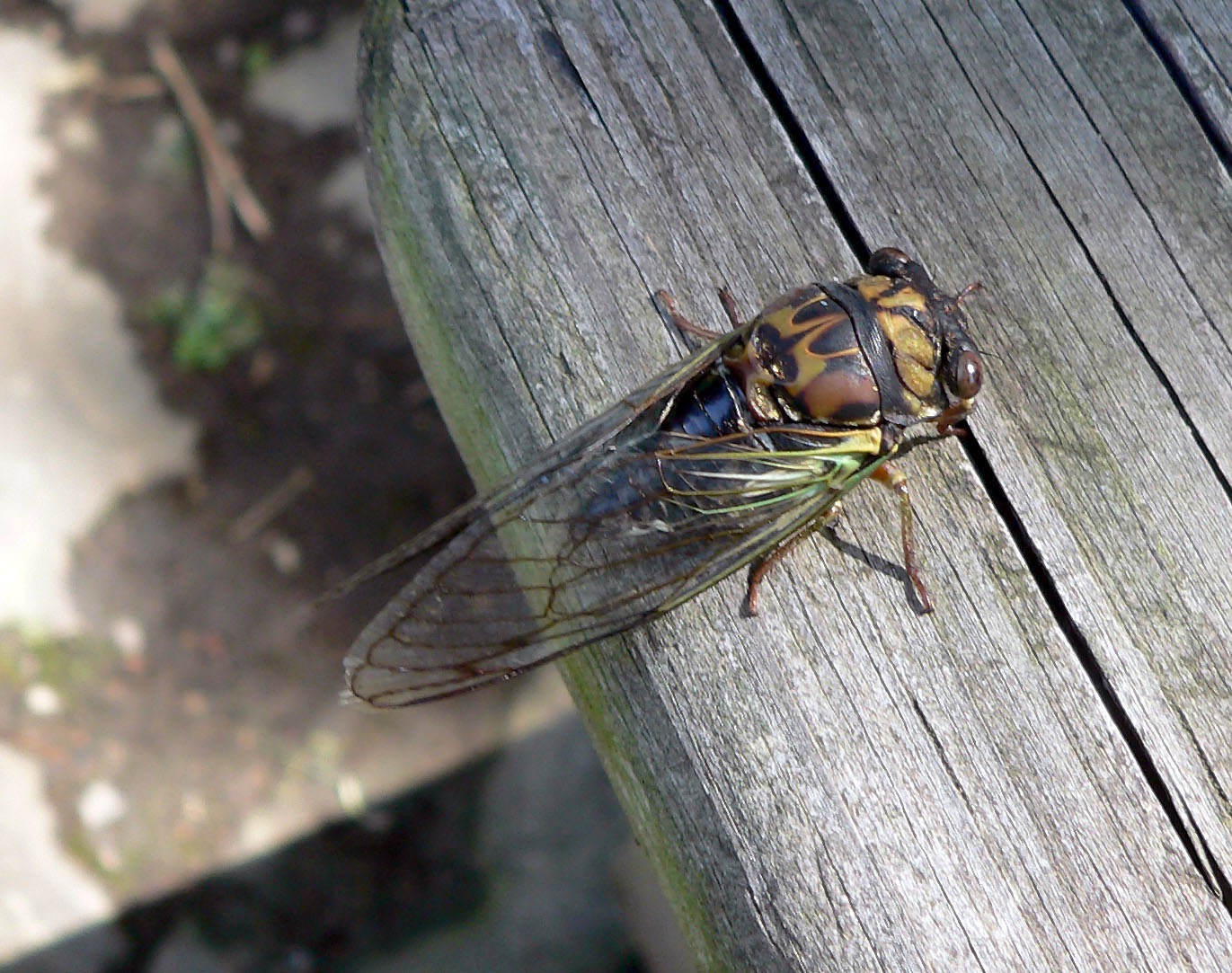 Dog-day Cicada Tibicen linnei. This is not the 17 year periodical cicada that recently had a massive emergence along the east coast (but not in Massachusetts).

He was going to use the Cicada Killers in the lek I bumped into as hunters to collect cicadas for his friend and I was invited to watch and learn.

The first thing I learned was that despite their formidable appearance and intrusive flight behavior, Cicada Killers are mostly harmless.  The males that had been buzzing me cannot sting (like all male wasps), and the larger females do so very rarely and only if handled roughly or stepped on with bare feet.  In fact, I watched Gerry remove cicadas from the female wasps bare-handed without concern.  But I get ahead of my story.

Male Cicada Killers emerge from the ground in July in areas that were used as leks in the previous year.  They establish territory and search for virgin females who emerge a week or so later.  Following a complicated ritual mating sequence the females begin to dig a hole in the dry, sandy soil using their jaws as diggers and their hind legs to shove the loose dirt up and out of nest holes that can be up to two feet long. 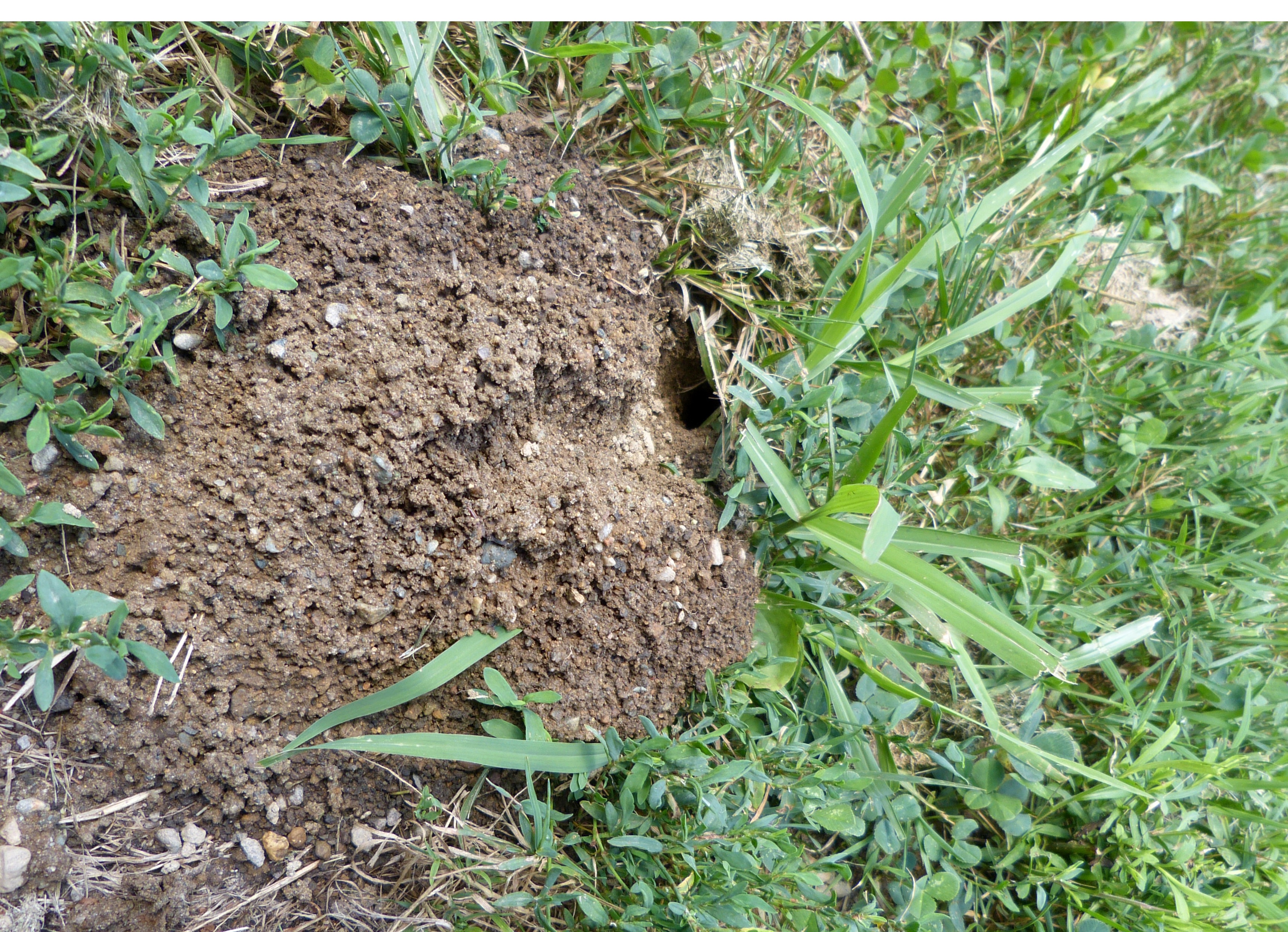 The entrance to the nest hole is the small dark circle in the middle of this photo.

The female wasp then goes hunting.  Apparently using sight rather than sound (since most of the cicadas caught are females that don’t emit any noise) they search nearby deciduous trees and capture and sting a cicada, paralyzing it.  Dog-day Cicadas are more than twice the size of the hefty female Cicada Killers so it often takes some time and effort to deliver the prey to her nest hole. 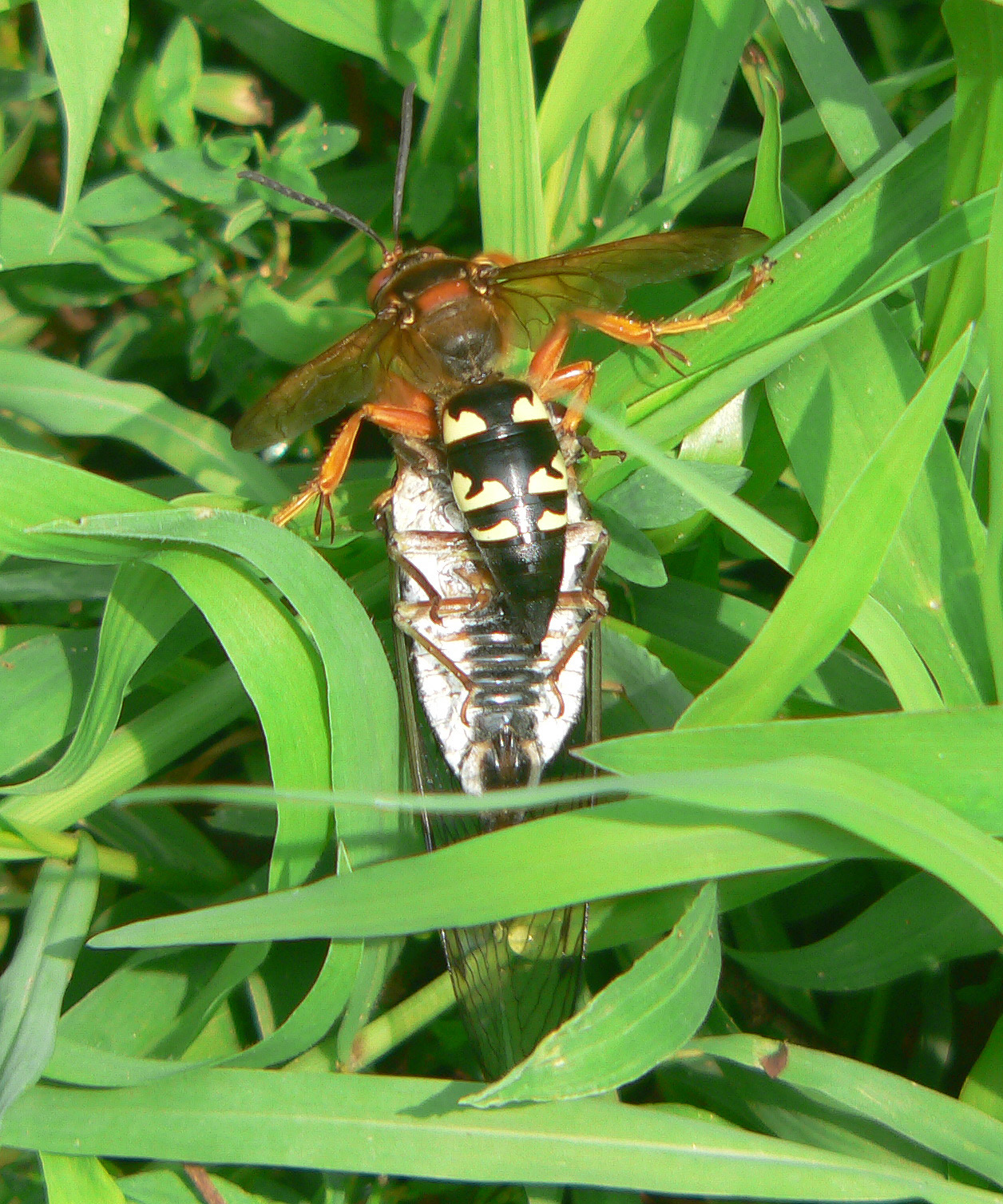 This female Cicada Killer is struggling to carry the paralyzed cicada through the grass to her nest site.

This is when the intrepid collector intervened, snatching the cicada away from the female before she could place it in the nest. In an afternoon he amassed an impressive collection of several dozen specimens he later sent to his entomologist friend.  What a clever way to collect these bugs that hang out high in the tree canopy and are therefore hard to get!

Returning to the story of this insect’s fascinating life cycle, the female carries her prey down into the nest where it is to become a living host for an egg that will hatch into a grub. This larvae will feast on the prey for the next week or so until it forms a dry cocoon and lies dormant for the winter.  The female chooses whether to lay a male or a female egg.   Female eggs require some of the stored sperm she has from the earlier mating; males eggs do not.

If she lays a female egg on the paralyzed cicada her work isn’t over.  Females, presumably because they are considerably larger than males, must have at least two cicada bodies in order to prosper.  So Mamma Cicada Killer ventures out again to find and subdue another Dog-day Cicada to provide for her later-to-be daughter.  Then she covers over the entrance and proceeds to dig another hole (sometimes she may just make a second tunnel connecting to the original opening).

The lek is a busy place for several months in late summer and early fall.  The Cicada Killer males are buzzing around defending their territory and looking for unfertilized females. The females are mating, digging nest holes and hunting cicadas to haul down to their nest hole.   The resident birds hang out to take advantage of the opportunity to capture and eat both predator and prey.

Property owners may be unhappy when a Cicada Killer lek is established on their lawns.  The temporary damage done to grass by these insects has to be weighed against their  biological control on cicadas, which damage deciduous trees by laying eggs under the soft bark of the new growth on the trees’ terminal branches.

Like a number of other insect species (dragonflies for example), Cicada Killers spend ninety percent of their lives in various stages of dormancy underground. But the sixty days or so they are out and about cause quite a stir.  A recent article in The Atlantic discusses this insect from a different vantage point.  If you want to get even more involved in Cicada Killers check out Professor Chuck Holliday’s website and read about his research on these bugs.

I am doing a “Bug Mob” at the lek this Monday August 5th at 12:30 PM. Check that out on the Arboretum website.